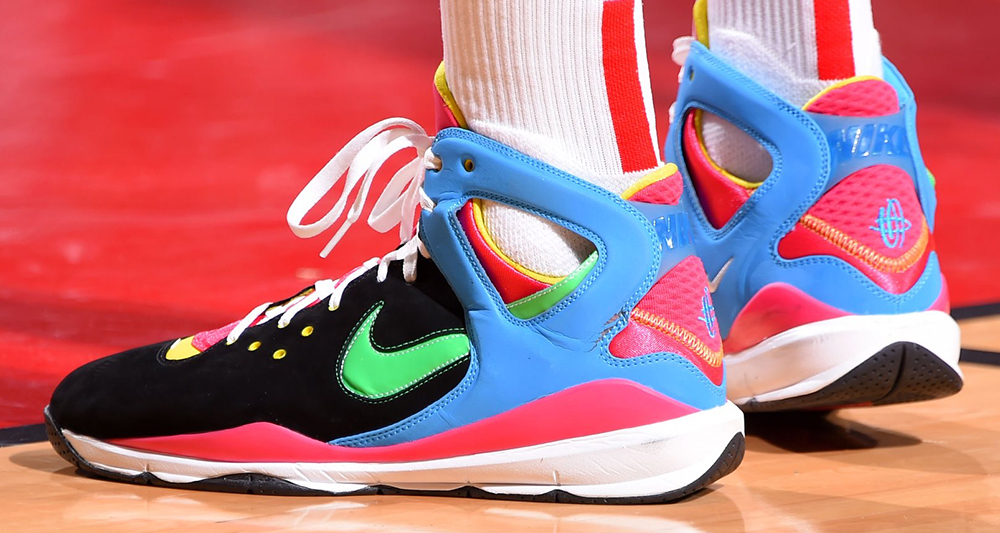 The reigning Kicks On Court champion is still the favorite to take the throne for the 2019-2020 season.

If you weren’t paying attention this summer, PJ was living his best life getting fits off like no other. Seriously, PJ Tucker is insane. From Paris Fashion Week to modeling the UNDFTD x Nike Zoom Kobe 4 Protro, the H-Town forward is ready for this season.

We’ll be compiling every sneaker PJ wears throughout the entirety of the NBA season. Be sure to stay locked in with us at Nice Kicks for more.

+ The pair was exclusively made for Yeezus himself during his tour. PJ’s plug is on another level
+ We recently caught up with PJ Tucker on an exclusive one-on-one interview talking about what shoes he’s still searching for, his relationship with Kobe and more. Read here.

+ The Nike Kobe 4 is back and better than ever. Peep every colorway so far here
+ The colorway is inspired by Kobe’s children’s book

+ The “Kay Yow” colorways are just one way Nike shows support and solidarity by those affected by cancer in honor of the late, great Kay Yow and the Kay Yow Cancer Fund
+ No word on a release date for these yet to stay tuned

+ Shoutout to PJ for repping The Bean at Staples Center. Last week, we saw players across the league honor the Mamba and Mambacita
+ When’s the last time you hooped in some Kobe 2s?

+ The fact that PJ has these is both unreal and not a surprise. Sneaker king
+ The elephant print accents across the upper are money

+ These are too clean
+ Which CLOT x Nike collab is your favorite to date? Let us know

+ Man oh man. PJ really isn’t messing around this year
+ Last time we checked, only Drake had a pair. Should Jordan release these?

+ The Kobe 4 is back. Peep every pair rocked here
+ The two-toned Swoosh outline is a good look

+ Word to PJ for debuting KD’s kicks while he sits out
+ As we await release details, what are your thoughts on the pair?

+ One of the best Air Jordan 10s in recent memories? Let us know your thoughts
+ Learn more about the upcoming SoleFly x Air Jordan 10 here

+ These are so good
+ Should Nike do a wide release on these? Let us know your thoughts on IG

+ Favorite Kyrie model?
+ PJ isn’t afraid to hoop in anything

+ Prayers go out to Vanessa Bryant, her daughters and all of the families affected from yesterday’s crash that killed Kobe, his daughter Gianna and others

+ Jersey and shoe combo is money
+ The Kyrie line channels a lot of influence from the Nike SB and Dunk line. Learn more here

+ Kobe 4s are the way. Peep every colorway rocked so far here
+ The colorway draws inspiration from the Mamba’s children’s book. These are ill.

+ PJ Tucker is an absolute baller in every sense of the word for bringing these out
+ $14K. Something light for the KOC legend

+ LV from top to bottom for PJ
+ PJ’s fits have been consistently coordinated as of late. Mad props

+ Man, Nike needs to release these ASAP
+ The Nike KD 4 was miles ahead of the curve when it released back in 2011

+ Such an underrated hoop shoe
+ Anybody ball in the Kobe 11 recently? Let us know on social

+ These were so clean
+ Who still has their pair?

+ The #HeatInHand legend is at it again with the Air Jordan 3 “Katrina”
+ Despite leaving the game early due to a head injury, PJ still brought the heat

+ PJ’s sneaker plug is on another level. These are insane. Not even KD has these
+ The KD 4 was so ahead of its time

+ The pair was worn by the Brodie. Respect to PJ for wearing these during his teammate’s return and tribute night
+ PJ  Tucker was teasing Westbrook on IG that he got these himself since Westbrook didn’t want to lend a hand

+ The pair was inspired by the late Joan Miró and his iconic “Woman and Bird” sculpture
+ The Air Jordan 7 was the silhouette of choice for the tribute as Jordan led Team USA to a gold medal in Miró’s hometown of Barcelona, Spain in the summer of 1992

+ Issa vibe!
+ Should the Swoosh and the magazine link up again? Let us know your thoughts

+ PJ most definitely locked-up his KOC Championship for a fourth year in a row
+ Only 23 pairs of this colorway exist. Wow.

+ PJ is wild for these
+ Such a clean colorway. That All-Star Game match-up was elite

+ Word to PJ for bringing these out from his vault
+ Y’all remember when Nate Robinson rocked these 5 years ago? Legend

+ This specific pair is actually one if Kobe Bryant’s player exclusive pairs. Talk about bringing heat from the vault
+ Hopefully PJ has more of Kobe’s heat up his sleeve

+ When’s the last time you hooped in the AJ2?
+ The “Doernbecher” iteration of the AJ2 is the best one to date. Hands down.

+ The “Argon Blue” colorway dropped in 2007 and has yet to drop again. PJ keeps bringing out gems
+ The AJ11 Low IE is such an underrated hoop shoe

+ PJ continues to break the internet with this Nike Zoom KD 4
+ iD? PE? Sample? We need answers on these 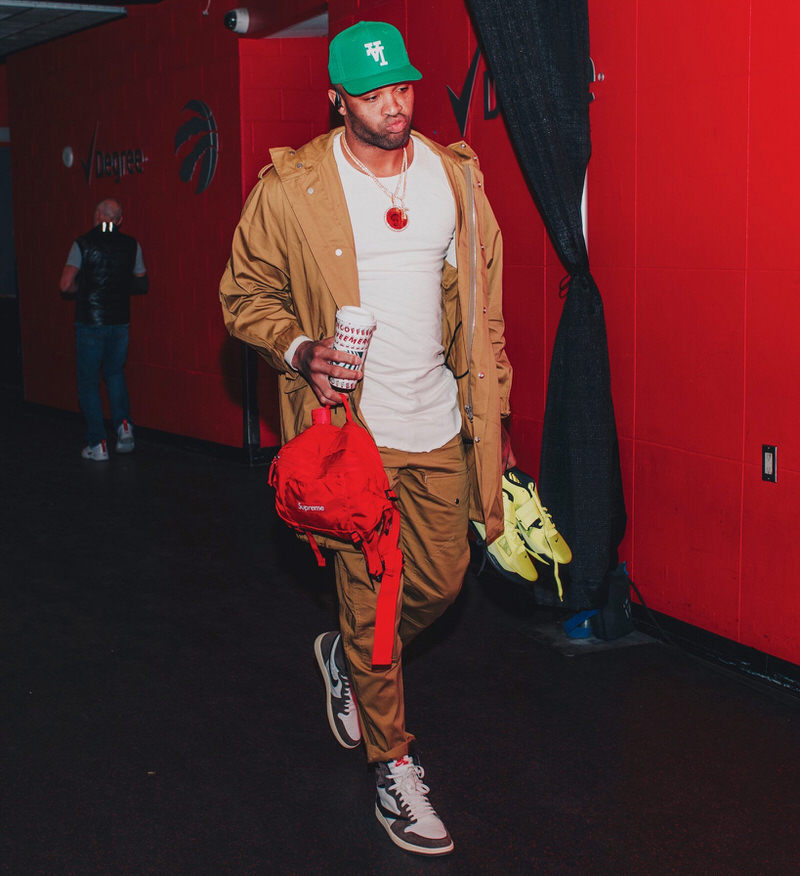 + PJ is really putting some respect on the Huaraches. That’s real
+ This colorway is actually a retro release from ’04. Who still has their pair?

+ Word to PJ for bringing the Huaraches back to the court
+ In case you missed it, PJ is officially back with Nike

+ Back in 2005, Nike LA held a contest in which kids designed colorways of the Nike Air Zoom Huarache 2K5 in which Kobe Bryant selected four pairs — one of which was designed by Mike hence the stitching of the name
+ Kobe wore all four pairs at the beginning of the 2005-2006 season

+ It looks like PJ Tucker officially signed to Nike. Welcome back PJ
+ Take a look at every Kobe 4 rocked on the court since 2018 here

+ This colorway is an homage to Rice H.S. in New York which is laced by the Mamba himself
+ You can feel how this model was the precursor to the OG Hyperdunk

+ One of the rarest sneakers to date. Who has a pair?
+ How many pairs of shoes are in the LV duffle?

+ Word to PJ Tucker for pulling a Thabo Sefolosha and rocking Air Max 90s on court
+ Would you hoop in your OFF-WHITEs? Let us know your thoughts

+ The Nike Zoom Kobe 4 is back and making waves. Take a look at every pair here
+ The split colored outline on the Swoosh is a nice detail

+ The colorway was exclusively made for Fairfax HS in Los Angeles which has a deep relationship with The King
+ Which LeBron 3 colorway is your favorite? Let us know on social

+ Former teammate Chris Paul had this pair made exclusively for reigning KOC champ PJ Tucker. Game recognize game
+ Stay tuned for all the facts on this pancake pair

+ LA artist Mr. Cartoon gave a creative spin to the classic Nike Air Force 1 Low. The shoe debuted on July, 4 2009. Who still has their pair?
+ That’s a clean fit PJ

+ A timeless colorway on a classic LeBron model
+ If you look closely, you can see PJ’s tattoo illustrating the moment him and Nipsey dapped each other up at the 2018 season opener in Staples Center. Respect.

+ The Air Jordan 21 was designed by D’Wayne Edwards back when it originally released in 2006
+ The silhouette featured a full grain leather upper, a diamond quilted inner bootie and lower foot vents

+ Forever a classic in our eyes
+ When’s the last time you hooped in Air Jordan 9s?

+ Word to PJ for putting on for the original kings of PEs Derek Anderson. Take a look at some of his best here
+ Y’all see that yellowing? That’s OG status

+Which Air Yeezy silhouette was better — 1 or 2?
+ Who can guess PJ Tucker’s Starbucks order? Let us know on social

+ Pairing the Patta Air Max 1s with this fit is definitely a bold choice
+ PJ Tucker brings out another limited Nike KD 3 in hand. The pair was gifted to members of the Nike Basketball Skills Academy back in 2011. Notable names at that camp? Austin Rivers and Harrison Barnes

+ The white lace swap is a move on the first SBB 1s
+ Will PJ pull a Gil this season and hoop in the Bin 9s?

+ By the looks of it, PJ has plenty of Protro PEs
+ Where does this red/gum pair rank?

+ PJ pulls out the Supreme AF1 High from five years back
+ Let’s hope he plays in these KD IVs soon, too

+ Word to the OG, the one and only and undisputed sneaker legend DJ Clark Kent
+ The neon green and elephant print go crazy

+ Who has a pair of these SBs?
+ PJ looks like he’s ready to box in that Pyer Moss x Reebok robe. That Rolls Royce hat is clean, though.

+ The silhouette was popularized by Tim Hardaway Sr. back in the day
+ The 1997 release of the sneaker featured controversy as the Muslim community argued that the “Air” font on the back was too similar to the aesthetic of “Allah” in Arabic. The pairs were recalled and the 2007 retro featured the OG “Nike Air” branding on the back of the shoe

+ Who else hooped in a pair of these back in the day?
+ The construction of the shoe featured a PureMotion sole and a quilted upper for maximum comfort and durability

+ It was only a matter of time before PJ brought out La Flame’s most recent AJ6
+ Hype or not, PJ is hooping in everything this season

+ Heat in both hands. Salute.
+ The “Viotech” is coming back at the end of 2019. Get more details about the upcoming re-release here

+ Who thinks Nike should release these to the public?
+ The colorway is named after Kobe’s book dubbed “Wizenard”

+ Aside from PJ, the Mamba is the only one seen in this exclusive colorway. Family ties
+ The gradient speckled midsole is absolutely money on these Kobe 4s

+ Although Big Sean is no longer with adidas, Detroit’s finest was way ahead of his time with his collabs
+ Learn more about Big Sean x adidas collaborations here

+ Could PJ be the face of Yeezy Basketball? Let us know your thoughts
+ The silhouette features a mesh upper with suede hits across the upper

+ Learn more about the importance of the Nike Zoom Kobe 4 Protro and its significance here
+ We absolutely need a release date for these. Pure money

+ The PUMA Clyde Hardwood is the brand’s newest silhouette debuted originally by Kyle Kuzma
+ What are the odds that PJ signs with PUMA? Let us know your thoughts on social

+ While he’s still a sneaker free-agent, it looks like PJ is rotating kicks from his vault
+ PJ stays on his Mamba Mentality

+ Y’all think the Mamba hooked PJ up with this pair?
+ Take a look at the best Nike Zoom Kobe 4 Protros we’ve seen so far here

+ The Houston Rockets are making waves abroad with their preseason campaign in Asia
+ PJ continues to bring out the heat from his vault after declaring he was a sneaker free agent. Should he sign with another brand? Let us know on social

+ Although it will never happen, Nike should re-release that Air Yeezy 2 for the sneakerheads that missed out the first time
+ PJ stays getting fits off.  Take a look at his offseason wardrobe here

+ The Nike LeBron 15 “Fairfax” is an exclusive PE for the kids over at Fairfax High School in Los Angeles, California
+ The King and Fairfax HS have been working in unison since the Nike Zoom LeBron 3. Will we see the 17 get the Fairfax treatment?

+ The Nike Zoom Kobe 5 “Prelude” was a member of the “Prelude Pack” that dropped in 2013 that featured Kobe’s first 8 signature models with different colorways
+ Is the Nike Zoom Kobe 5 the most overlooked silhouette? Let us know your thoughts

+ PJ is literally rocking the embodiment of heat. We see you PJ!
+ Back in 2009, Nike and the Mamba reintroduced low-top sneakers and made them popular again. See this pair in detail here