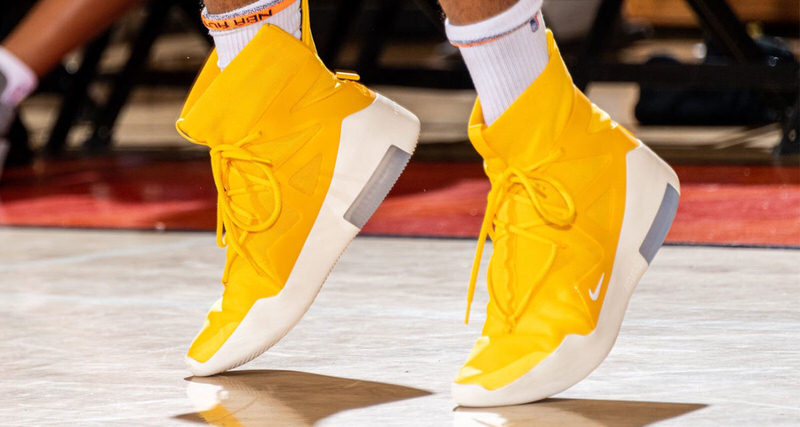 WNBA. Drew League. Summer League. Buckets are being made and heat is being brought to the court all summer.

This week, we see the newest member of the adidas Basketball fam rocking heat while retro Nike and Air Jordan silhouettes were also brought out from the archives. On top of that, the GOAT of women’s basketball has reclaimed her throne.

Take a look at the best from this past week and keep it locked with us at Nice Kicks for more Kicks On Court content all year long.

+ The colorway channels some OG Houston Rockets vibes. Take a closer look at the shoes here
+ Celtics guard Carsen Edwards recently signed a multi-year shoe contract with The Brand with the Three Stripes. Boiler up!

+ The coral-and-gum combo is absolute heat. Shootout Yvonne Turner for holding it down with the Phoenix Mercury
+ Learn more about the upcoming deconstructed Jordan Why Not Zer0.2 SE before it starts to roll out this NBA season

+ The colorway celebrates all of the championships that the Lakers have secured. Could we see Bron add to the legacy?
+ Peep the most fire PEs from The King himself in the LeBron 16 as we anticipate what’s to come this NBA season

+ The Jordan 13 served Michael Jordan in this OG colorway during his last season in Chicago
+ Is it time for JB to drop more remastered 13s?

+ The Nike LeBron 15 is constructed with Battleknit 1.0 which is a stronger derivative of Flyknit tech tailored specifically for The King
+ The colorway was part of the #LeBronWatch campaign that paid homage of iconic Nike athletes and silhouettes such as the Nike Air Mowabb as well as signature shoes from Ken Griffey, Bo Jackson and Deion Sanders among others

+ The mid-range assassin is hooping in the latest from the PG line. If you haven’t already noticed, the Las Vegas Aces might have the most heat in the entire W
+ The Nike PG 3 “NASA” celebrates the 50th anniversary of the Apollo 11 landing

+ The Nike KD 3 is covered with choice leather and pieced together by Flywire tech. Nike Basketball was in its bag during the 2010-2011 season
+ The KD signature line is due to get the retro treatment. Which KD model should hit the market again?

+ Taurasi is undeniably the GOAT when it comes to her PE game. Learn more about her relationship with the LeBron signature line and more here
+ Learn more about the fire colorway and take a look at the official images here

+ The newest member of the Nike Basketball line features a windowed Air unit, exterior mesh cage and a clean white midsole
+ The “Amarillo” iteration of Jerry Lorenzo’s creation might be the best one to date. Agree or disagree?