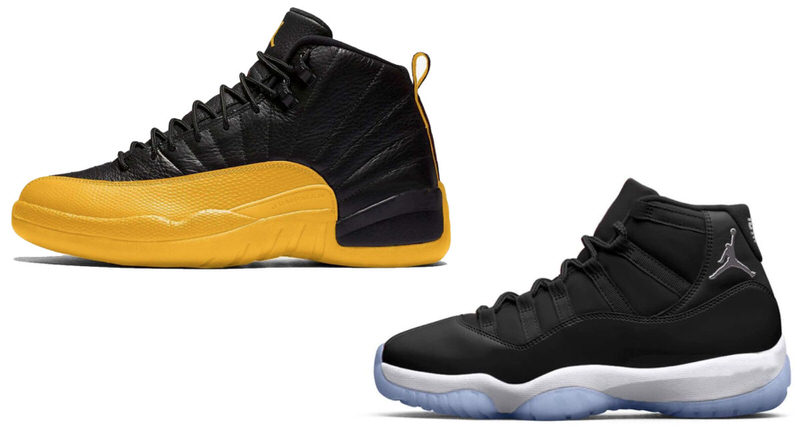 Business is booming for Jordan Brand.

Rivaling the run of the AF1’s retro resurgence in the early 00s, the Air Jordan 1 is far and away the toast of the sneaker culture and it’s been that way for the better part of this decade. The best part for JB? It’s adored in OG and new takes alike.

While the shoe that started it all has the Jumpman in good graces with old and young alike, partnerships with Travis Scott, Paris Saint German, Zion Williamson and a handful of top collegiate programs has Mike and Co. spreading their wings far beyond hardwood heritage.

Thus far, leaks for 2020 Air Jordan retro releases preview a mix of new takes on old favorites, re-retros for the first time ever and homages to OGs with Nike Air. See what’s reported to be on deck – keep in mind some leaks are now official, others are not – in the renderings and release calendar below.

+ Another Zoom Air Jordan 1? We’re here for it

+ In 2006, the Air Jordan Defining Moments Package released for the first and only time as a tribute to Mike’s first ring ever and first ring after retirement

+ While official images are yet to be seen, the AJ6 DMP is said to return for the first time 14 years after its only launch

+ Recently leaked, the Air Jordan 9 Racer Blue features an iridescent mudguard for a flip on an old Penny PE

+ Perhaps Hubert Davis or Mitch Richmond will see new takes on their 9s too?

+ Paying homage to such, an Air Jordan 3 “Chicago” is said to release at ASW 2020 in similar styling to DJ Khaled’s PE as a nod to the Bulls

+ Solefly and Jordan Brand are uniting once again

+ While the model is unknown, the palette should fall somewhere between “Shattered Backboard” and Miami Hurricanes

+ Reported to return for the first time ever, the triple-black 4s have been a favorite for hip-hop’s most fashionable artists in recent years

+ Gucci themed AJ1s have dropped before but not with this momentum

+ Tumbled leather, green Swoosh detailing and a beefed up Wings logo cap off this colorway

+ Still fire, the shoe is reported to hit with Tar Heel blue accents at retail

+ Worn by Mike his last season before becoming a champion, the Air Jordan 5 debuted both a reflective 3M tongue and a translucent sole

+ Are these better than the sample OFF-WHITE x Air Jordan 4s?

+ Remember the “Black Grape” Air Jordan 5s? The “Grape Ice” is the next chapter in the “Grape” series

+ Said to sport purple suede in all over fashion, sample shots are still yet to be seen

+ Lacing the ladies, the DTRT 4s play off the OG Cement 4s from the film

+ Nods to Sal’s Pizzeria appear too as an homage

+ Staying on the theme of royalty, the Air Jordan 1 “Court Purple” is also reported to release in April of 2020

+ Another twist on the Chicago theme, this pair plays with grey and red like the Cherry 10s

+ Back to patent, the Air Jordan 11 Low is set to come back with a Bulls motif

+ This continues the trend of AJ11 Low spring launches

+ This OG AJ13 colorway has released three times in total

+ Current renderings say the Grape, Fire Red and Black/Metallic will be used

+ An homage to the Classic Green 4s, this pair swaps in purple for that of the grassy shade

+ If the UNC 1s weren’t for you, this Duke makeup should be

+ A great ringer to the fragments, these are highly anticipated

+ Similar to the Alternate 89s, another Chicago themed 4 is coming

+ Similar in styling to previous pairs, this tie-dye pair is seen for the first time in rendered form

+ This is said to be a ladies exclusive

+ Going against the grain, brown tones are set to takeover the Air Jordan 1

+ Could this add even more casual legs to the AJ1?

+ Said to be shifting the Chicago palette with hits of grey, this Air Jordan 1 is slated for Fall 2020

+ Essentially a Celtics take on the Black Toe OG, the Lucky Green 1s look like a banger

+ These are said to be a ladies exclusive

+ These could flip materials when considering the palette’s previous executions

+ This pair seems very similar to that of the 2001 style

+ Solid white sole? Could be nice

+ Said to be similar to the “Legends of the Summer” AJ1, a new high top take is reported for 2020

+ Once again we see a new take on the Chicago tones

+ A follow up to the 2017 homage, this could be a true to form take of the Hare them

+ Though Union’s Chris Gibbs says it’s not 100% confirmed, it is apparently in consideration

+ After heating up the Air Jordan 1 and Air Jordan 4, a Levi’s x Air Jordan 6 is rumored to be next