In December of 2009, Nike Basketball and Kobe Bryant unveiled the next chapter for the Mamba — the Nike Zoom Kobe 5.

The Kobe 5 followed the trajectory that the Nike Zoom Kobe 4 set by engineering a low-top performance basketball shoe. While the concept certainly wasn’t new, Nike’s innovative technology, along with the Bean’s vision, came together to create a next-level low-top that was second to none.

The Kobe 4 was the foundation that supplemented the execution of its successor. The Kobe 5 drew inspiration from the game of soccer. Kobe, who is a noted follower of the game, noticed how soccer players were able to perform at the highest level in low-top boots. The inquiry led to Avar and Kobe teaming up for the future of footwear.

“For the Kobe V, we started with the science and performance elements and built from there,” Avar said. “We wanted this shoe to be a true reflection of his game and persona. As Kobe continues to evolve as an athlete, so will the footwear we create for him.”

The technological aspects of the Kobe 5 are the best indicators of how progressive the sneaker was, even for Nike. The shoe abandoned traditional stitching and implemented heat-bonded overlays on the upper. In doing so, the shoe looked faster and was also more supportive because of its durability and lightness.

The Swoosh also added Flywire technology that acted as a second layer of skin as it was specifically engineered to serve as synthetic tendons.

The Kobe 5 also added more of a lockdown structure with the reinforced heel cup. The carbon fiber weave on the midfoot also allowed for precision cuts and added the shoe’s ethos of an ultimate lockdown fit. In terms of cushioning, the Kobe 5 utilized the renowned Zoom technology in the forefoot and the heel.

The added comfort still allowed the shoe to be the lightest at the time coming in at 10.6 ounces.

The Nike Zoom Kobe 5 debuted on Christmas Day in 2009 as the Lakers hosted the Cleveland Cavaliers. The “Chaos” colorway would release on December 26 and ensued more colorways, and a Nike iD launch followed.

The Kobe 5 fueled the Mamba Mentality for the rest of the season.

Kobe Bryant and the Lakers had their eyes set on another ring after coming off a dominant performance in the 2009 NBA Finals against the Orlando Magic.

Kobe would average a 27/5/5 stat line during the regular season in 73 games. However, the Mamba would crank up the intensity in the playoffs. Facing the Oklahoma City Thunder, the Utah Jazz, and the Phoenix Suns, the Lakers would dominate and secure a spot in the 2010 NBA Finals. 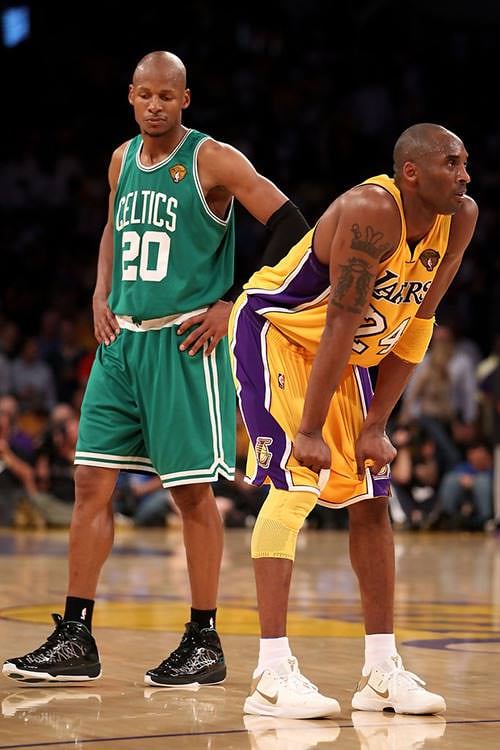 After an intense series with the Boston Celtics that went to 7 games, Kobe Bryant and the Lakers were crowned champions as the Mamba added his fifth ring. For the second straight year, Kobe was named Finals MVP.

Kobe would average 29 points, 6 rebounds, and 5.5 assists throughout the playoffs. In his final performance on the biggest stage, Kobe Bryant and the Nike Zoom Kobe 5 rose to the occasion.

Since the shoe’s rollout in 2009-2010, the Nike Zoom Kobe 5 would not be seen again until the 2014 release of the Prelude Pack to commemorate the past and future of the Mamba’s signature shoe line.

However, Nike launched an entire Protro release, part-performance, and part-retro, dedicated to the Kobe 4 in 2018-2019. All indicators pointed to a similar launch of the Kobe 5 for the 2019-2020 season.

The Nike Zoom Kobe 5 Protro “Chaos” launched in early January a decade after its initial release. The return of the Joker-inspired colorway indicated that more was on the way. However, things quickly changed.

The tragic deaths of Kobe Bryant, Gianna Bryant, and the passengers aboard the helicopter shook the world to its core.  The deaths of Kobe and Gigi led the basketball community to honor Kobe in the best way they could — wearing his shoes.

College basketball, the NBA, and WNBA would all show support and pay tribute to the Mamba in their way. Upcoming iterations of the Kobe 5 were rumored to release throughout the year. However, the events that transpired around the Bryant family along with the effects of COVID-19, the Kobe 5 Protro release was paused.

As basketball resumed within the bubbles, the legacy of the Mamba Mentality continued as players from across both leagues wore the Nike Zoom Kobe 5 Protro.

While Kobe and Gianna are no longer with us, their passion and dedication live on with us through the game and the Kobe 5. Nike is celebrating Kobe with a special Mamba Week dedicated to the Bean and the shoes he left for all of us to fill.

Mamba Week begins on August 23 with the release of the Nike Zoom Kobe 5 Protro “Big Stage” via SNKRS at 2 p.m. EST. Learn more about the upcoming releases and Nike’s commitment to the Los Angeles community here.