This month, adidas Basketball is bringing back their famed Feet You Wear tech and styling with quite the modern twist.

Debuting Boost You Wear, the new take on the old favorite has both basketball players and Boost lovers alike curious as to just exactly how this updated hybrid will feel and play.

Focusing on how we got here, this week’s Throwback Thursday turns the clock back to spotlight several of the most notable Feet You Wear models on the hardwood. Enjoy. 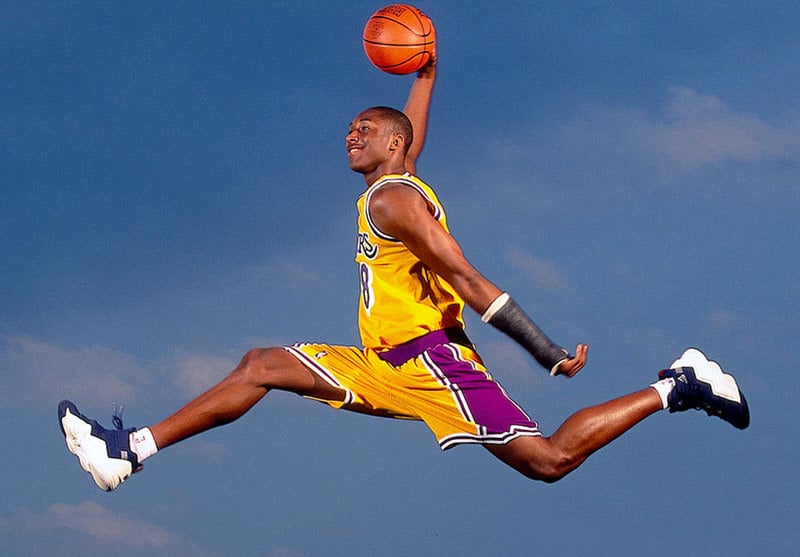 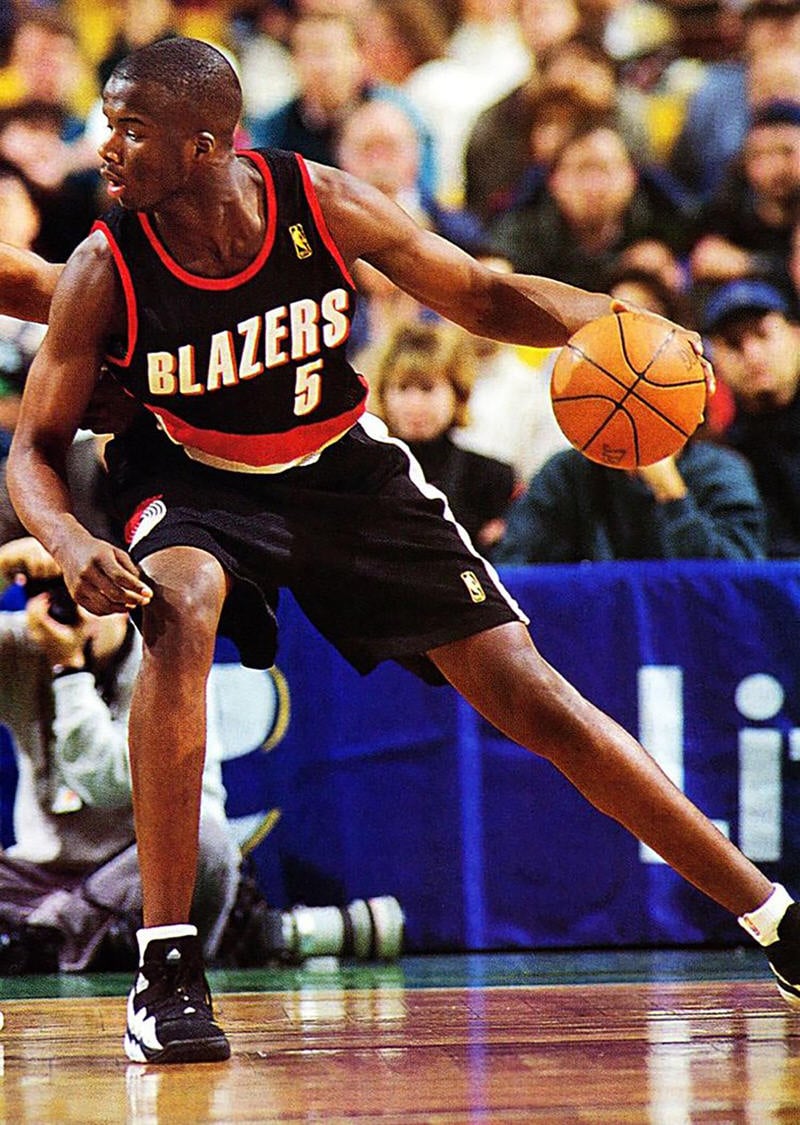 A basic introduction to a line that was anything but, the adidas EQT Top Ten 2000 set its sights on the future with talent and tech just the same. The first adidas model worn by the brand’s then healing hero Kobe Bryant, the teenage prodigy was joined by his prep peer Jermaine O’Neal in pushing the next generation of performance hoops.

While certain takes really emphasized the elastic strapping on the upper, the hero of this shoe on most colorways was the podular Feet You Wear sole that rightly stood as the statement attribute. Developed by Frampton Ellis, the third-party invention almost mirrors that of Boost in that it was offered to other brands first, and eventually revitalized the winning bidder and differed greatly from the tech out at the moment.

As eloquently put by our friend Zack Schlemmer in a piece for Sneaker News, Feet You Wear was “designed to mimic the natural curves and shape of the human foot…by creating a wider, lower-to-the-ground base with an organic curve from outsole to midsole — the shoe provided better stability for lateral movements.”  Uniquely crafted from the inside out, FYW would be pitted as a rival to Nike’s Zoom Air and led by then-adidas Creative Director Peter Moore — the designer years prior of the acclaimed Air Jordan 1.

This competition served as somewhat of a movement towards minimalism, with FYW offering a barefoot feel, though appearing in bulky fashion. While said tech was seen in running as well, just like Boost, its intention was to be used across brand categories in applications best suited for each sport. For basketball, the EQT Top Ten 2000 was first.

Also worn by the likes of Detlef Schrempf and Antoine Walker, the model would later release as a retro with Damian Lillard and other current adi athletes lacing it up on the pro hardwood. 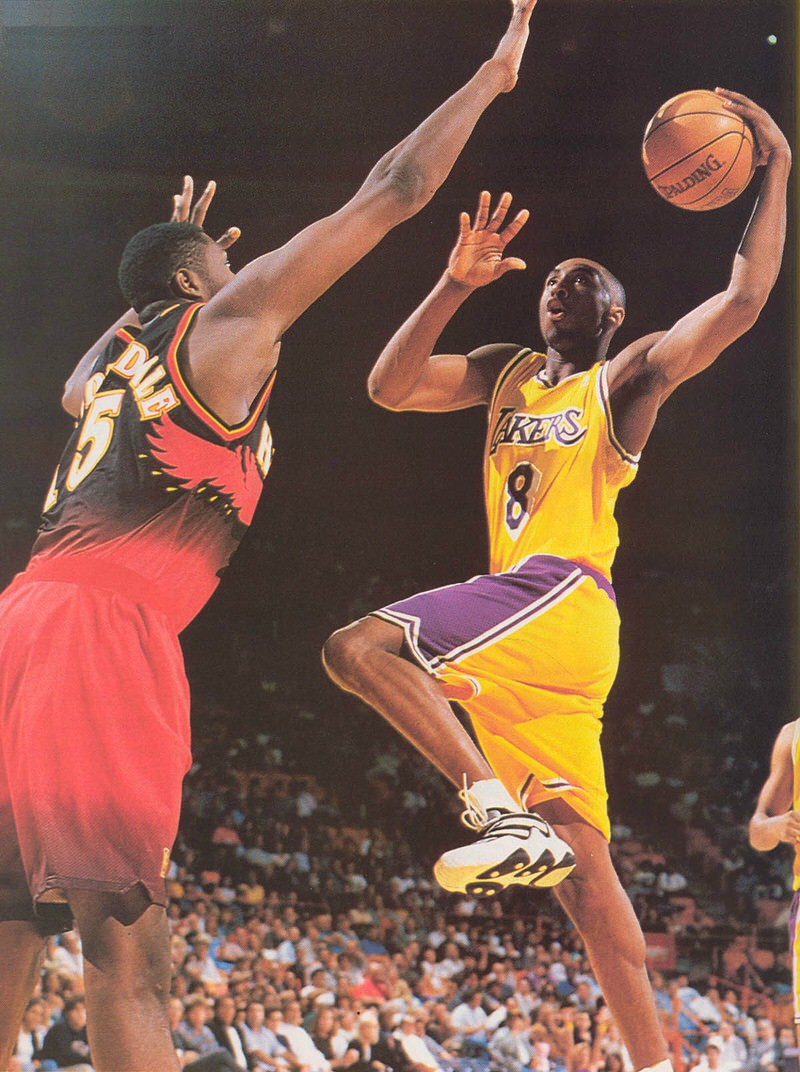 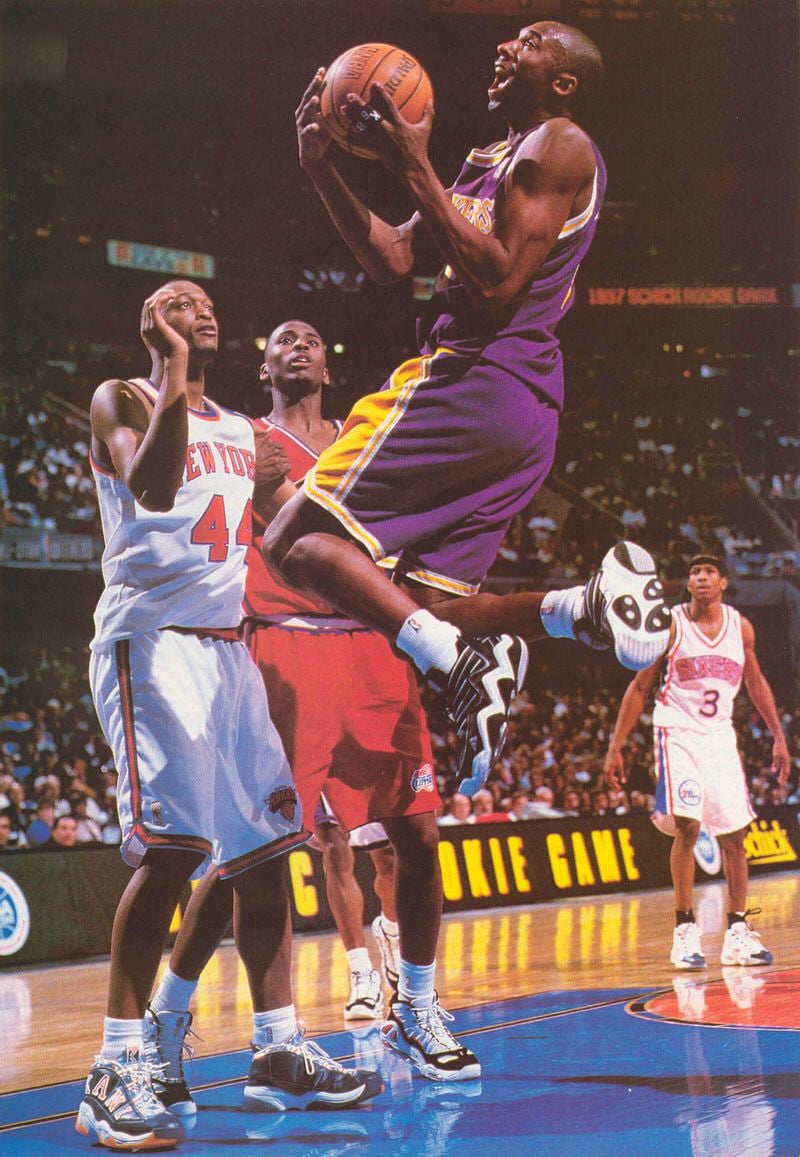 Visually ten years ahead of its predecessor in name, the adidas Top Ten 2010 is a cult classic most known for its endorsement from a teenage Kobe Bryant.

Never retroed, the design launched only in Black/White and White/Black colorways and was worn at Staples and on the road by Jelly Bean Bryant. The bald headed youngster famously rocked this shoe in the 1997 Rising Stars Challenge, where he would lead all scorers with 31 points. 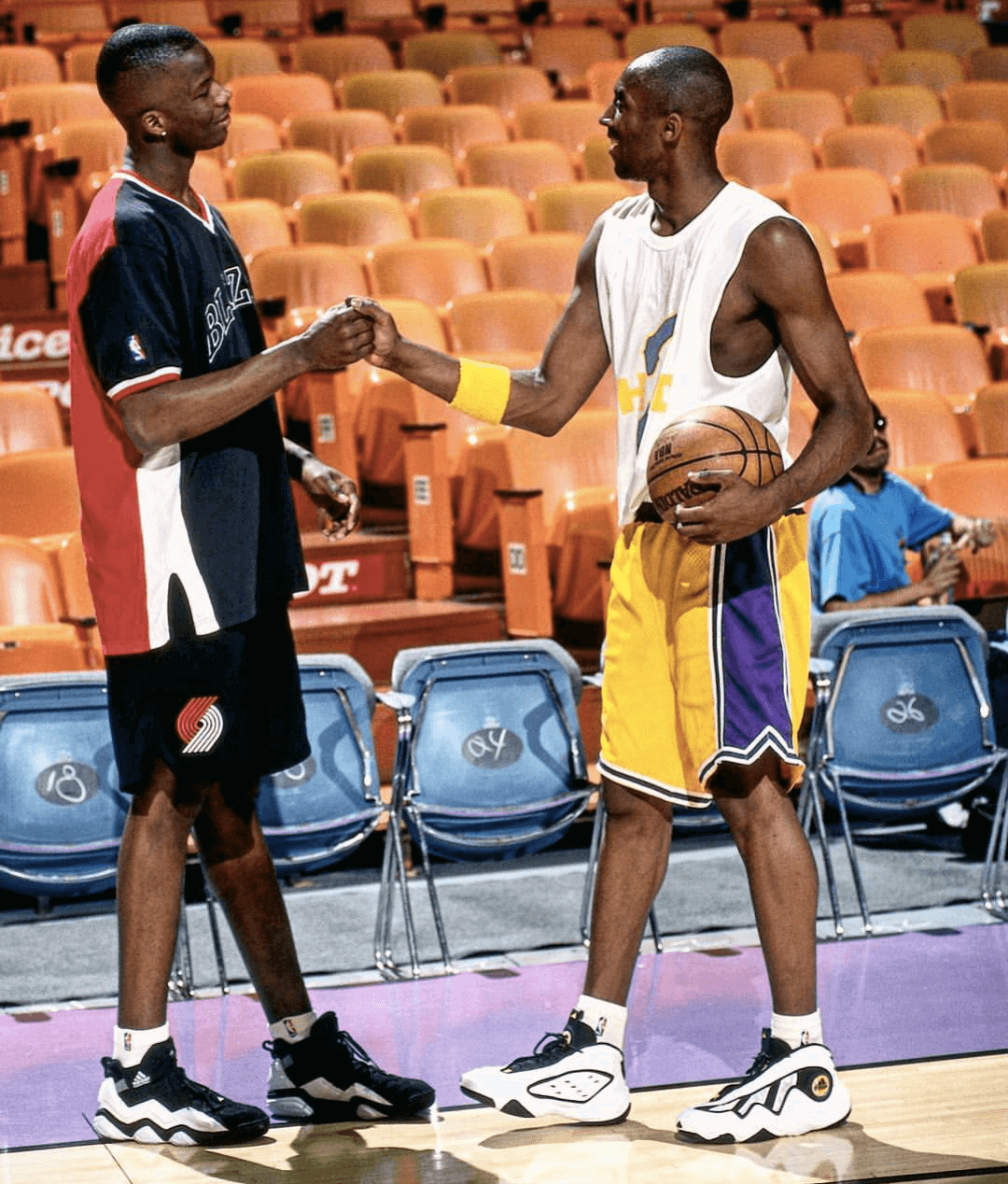 Getting burn from KB8 during the second half of his rookie season, the adidas EQT Elevation was the signature shoe of Kobe Bryant before said nickname stamped a silo.

While Sonics standout Detlef Schrempf added homeland ties to the German design, it was Kobe who was most known for the model, as he’d rock it in ads, on court and in his purple PE pair during his Dunk Contest win. For the cult collectors, there’s also a very rare low top version of this shoe.

The Elevation has received the retro treatment, with all OGs returning aside from the white pair. We’ve also seen colorways inspired by Kobe’s ties to Philly and then-adidas athlete Iman Shumpert. Best of all, Packer Shoes even brought back the Dunk Contest PE for its first-ever run at retail!

Sadly, the retros were much firmer in regards to wear for actual balling. Even worse, the Feet You Wear face did not appear on the shoe’s hologram, making for a ‘Jumpman Air’ moment for any kid that grew up Kobe-crazy. 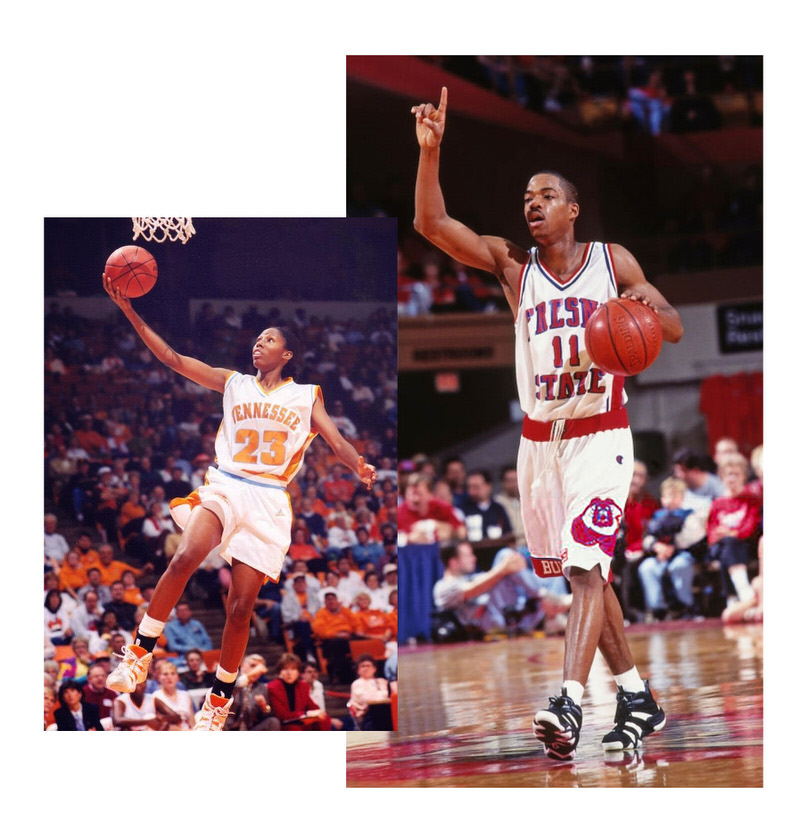 Growing both his hair and brand, Kobe Bryant became an official signature star with the adidas KB8. Showcasing Feet You Wear extremely well in regards to color blocking on the outsole and midsole, the model still serves as a statement shoe for the brand in basketball thanks to its bold Three Stripes.

While Kobe would rock the shoe his sophomore season in both an All-Star matchup against Mike and a run at redemption in the playoffs, the shoe would be sported by a wide range of hoopers during the 97-98 season.

From Skip to My Lou at Fresno State to Chamique Holdsclaw at Tennessee, the model would make its way on the amateur hardwood elite in inline and team bank colorways. Even Trey Parker and Matt Stone would sport the KB8 in their debut film, BASEketball.

The shoe would remain a statement on the hardwood for years to come as a team shoe, much like the Reebok Question. After Kobe’s departure from adidas, the model continued to run at retail and in team takes, as the renamed “Crazy 8,” with NBA athletes like John Wall and Derrick Rose lacing them up and collegiate stars at the likes of Louisville keeping the Feet You Wear franchise alive.

Antoine Walker is to the adidas Real Deal what Kobe Bryant is to the adidas EQT Elevation. An unofficial signature of sorts, Employee #8 got buckets in Boston while other young shooters like T-Mac and Tim Thomas kept the shoe hot in the Eastern Conference.

Sporting a very protruding midsole to highlight the FYW tech, the shoe would spur a retro run that would see an older ‘Toine lace his old shoes. During said time, OGs would come back as would new makeups. In regards to the sole styling, it wouldn’t be out of bounds to draw a line from the midsole made famous on these to that of today’s Prophere. 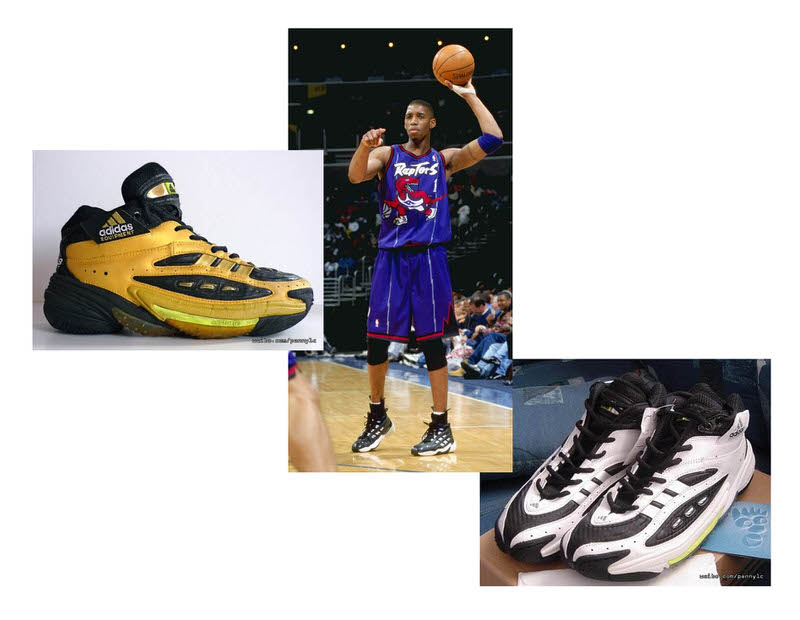 Very aggressive — especially in the takes that didn’t hit the NBA hardwood — the adidas Dominion has all the makings of a cult classic. Odd in design and worn by young talent of the moment, the model managed to fuse MTV-era edge on top of the FYW platform. 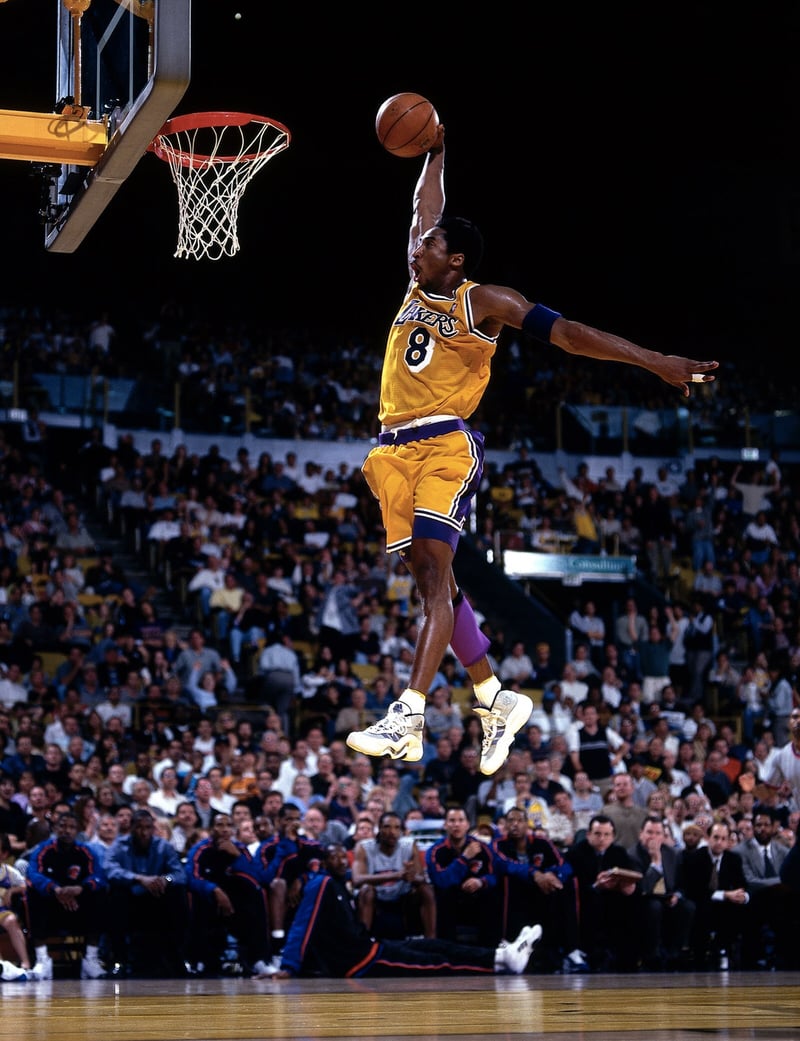 A lockout launch may have stifled the impact of the adidas KB8 II. Though the original was a smash hit commercially and across tiers of hoops, the sequel was sported by Kobe almost exclusively.

A mound of a shoe, the KB8 II drew more from the Dominion than other FYW favorites, with its tall stance and unique branding that is still rarely seen. Dropping in three Lakers-friendly colorways, Kobe crazed fans loved these, with retros eventually hitting in the 2010s. 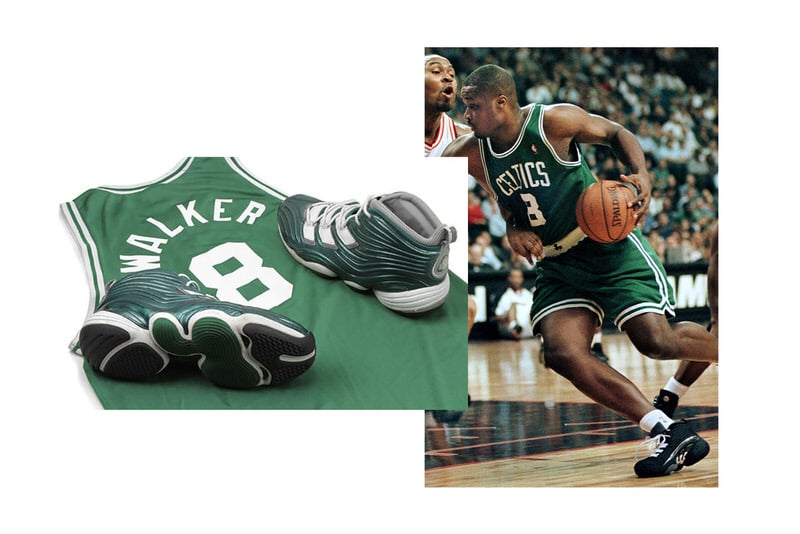 Much like his previously worn model, Antoine Walker was the real deal. A hybrid forward who once said he shot so many threes because there were no fours, Employee #8 would’ve made a killing in today’s game with his range, size and fast feet that would’ve worked great on both sides of the pick and roll/pick and pop.

His first and only signature shoe (sometimes called the Real Deal II), the adidas AW8 was totally of the times. Wavy design and bulky build were that of the era and the endorser, with a hologram on the heel referencing favored models from the likes of Mike and Kobe. The split toe shape actually went on to influence the new modernized Crazy BYW X.

The adidas EQT Responsive is one of the oddest and illest models from the Three Stripes basketball lineage. Both officially and unofficially the KB8 III, Kobe Bryant laced up this model before going the space shoe route with the second chapters of his signature line at adidas.

Visually a much faster KB8 and slimmer AW8, the FYW model was favorited by Tracy McGrady prior to him realizing his own signature series. The model has made news lately, as its tooling has been re-incorporated onto the Yeezy 500. 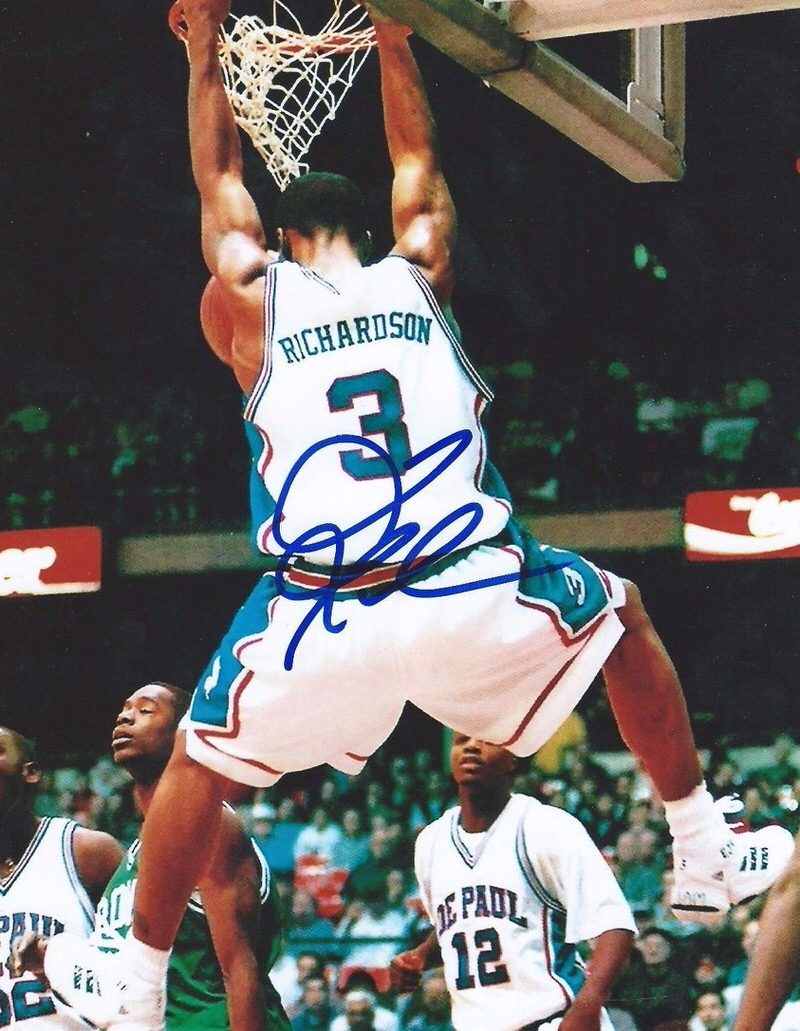 Headlined by Villanova product Tim Thomas, the adidas Forum Supreme was both ahead of its time and of its time as it merged adi hardwood heritage with slightly modernized tech. Much like the Superstar 2G or pivotal Pro Model revamps, the Forum Supreme was constructed off an old school ethos, with rounder lines and upgraded specs playing to today’s game. In this case it was a FYW sole. 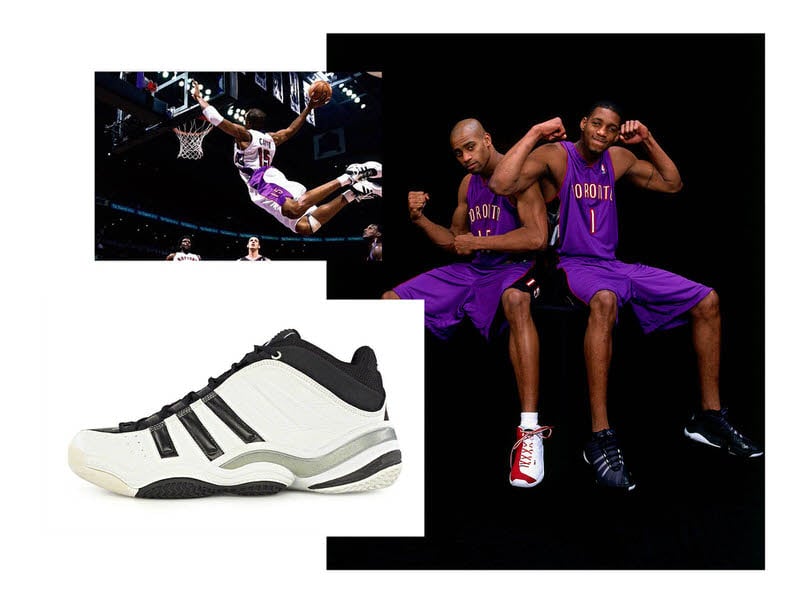 An elevated team shoe if there ever was one, the adidas Bromium I & II brought Feet You Wear to the masses. More appreciated at the amateur level, the well-branded model blocked well in school colorways seen on Tamika Catchings and the Tennessee Lady Vols, while a young Sebastian Telfair made a name for himself at the brand’s famed high school camp.

In the league, the Bromium line was backed by longtime FYW endorser Tracy McGrady, who if you look closely enough saw an early iteration of his logo on the medial toe box. A free agent in the sneaker realm at the time, his cousin Vince Carter also laced the line while rocking with the Raptors before bringing on the boing with Nike. 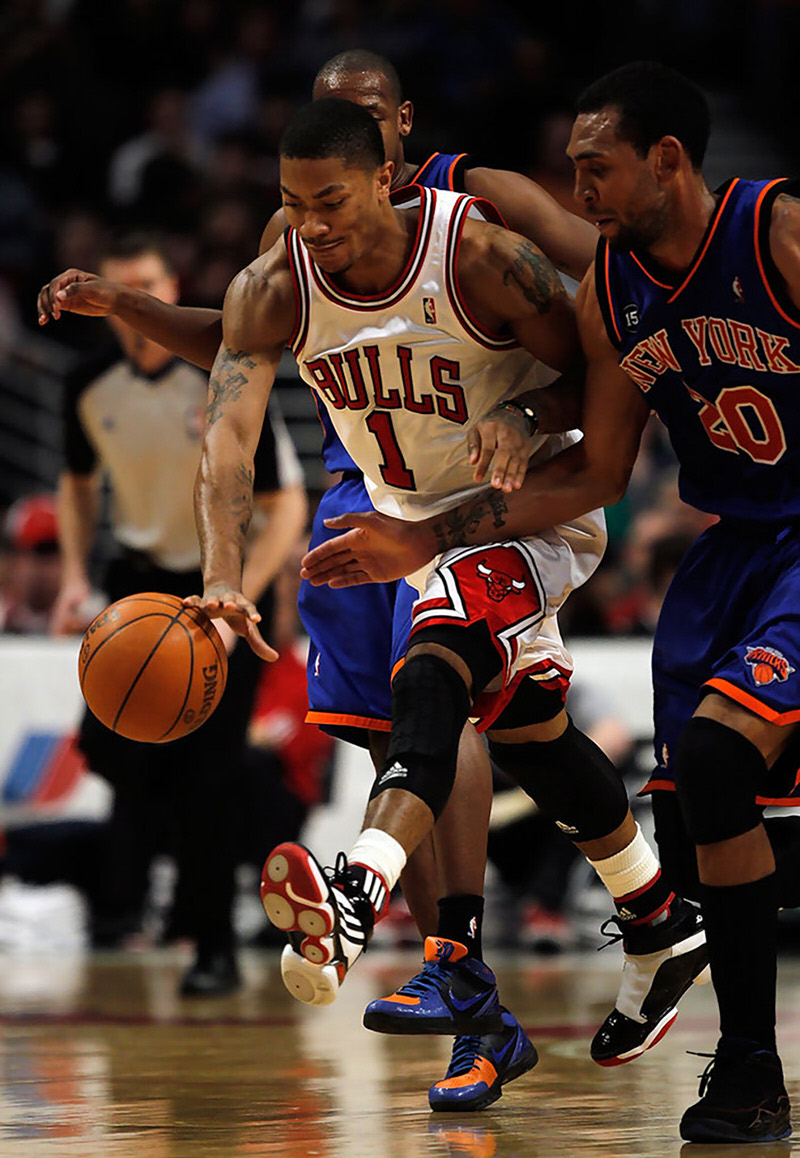 After losing the licensing to Feet You Wear in 2001, adidas went a different direction with progressive pairs like The Kobe One & Two, alongside sleeker silos like the Mad Handle and an eventual T-Mac line that built off the feather midsole. It was an opposite direction to that of FYW.

Back in the fold come 2010, the adidas TS Supernatural Creator would be the return of Feet You Wear to the hardwood, with the likes of Derrick Rose and Gilbert Arenas fronting the campaign. Much like ten years before it, the tech would soon disappear in favor of a new direction, led by the Crazy Light series crafted by designer Robbie Fuller and executive Lawrence Norman. 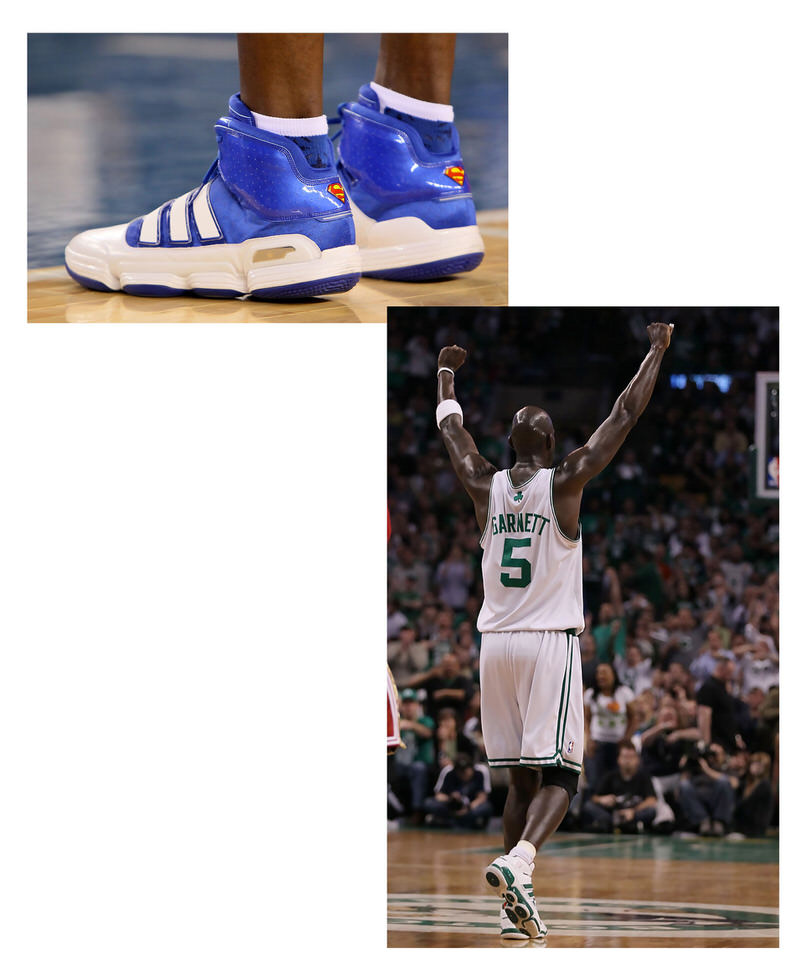 The big man companion to the previously mentioned guard shoe, the adidas TS Supernatural Commander laced Dwight Howard and Kevin Garnett when both were dominating the Eastern Conference paint.

Big, bulky and heavily branded, the shoes carried on the Team Signature legacy, with PE takes for both ballers on the block. 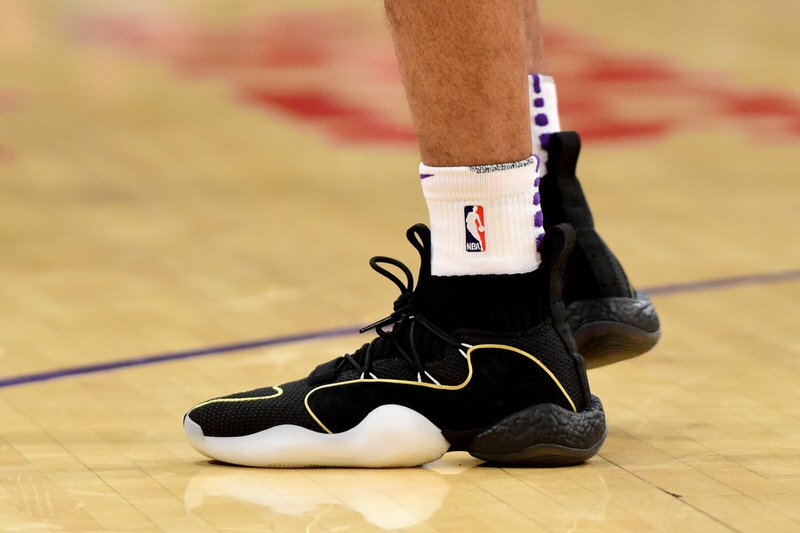 Aiming for a best of both worlds hybrid like Jigga and Kellz, the adidas BYW X combines Feet You Wear mapping with a big injection of Boost in full-length fashion. Debuted by Nick Young and Brandon Ingram, fittingly on the night that the OG FYW wearer saw both of his Lakers jerseys retired, the shoe is expected to be headlined by re-signed All-Star point guard John Wall.

See and learn more about the adidas BYW X here.