Nike‘s ongoing partnership with Stussy stems back all the way to the year 2000 when the streetwear label was credited with the first collaboration with Nike as a streetwear brand.

Since their early beginnings, the acclaimed apparel brand that was started by Shawn Stussy in Laguna Beach has become a pioneer for introducing new colors, textiles and design hacks to some of the Swoosh’s most renowned footwear offerings.

From crazed favorites, like the Dunk, Blazer, and the Huarache, to first-ever creations like the Free Trail, Stussy recognized early on that a well-executed collaboration is either a balance of simplicity with an elegant spin or combination of retro and contemporary design elements to form a hybrid silhouette – something that has now become a mainstay in both collaboration and inline production.

With Stussy’s upcoming project with Nike SB on the Blazer, we decided to round up a history of the duo’s collaborative efforts over the years to celebrate the beginning of dual-label partnerships for what we now recognize as collaborations.

Nike and Stussy’s common regard for what one another specialized in has not only helped form a template for collaboration requirements but a storytelling medium that evokes a personal connection between product and consumer.

The Air Huarache was Stussy’s debut collaboration with Nike and was a special European project that included the talented minds of Fraser Cooke from Nike and Michael Koppelman on the Stussy side.

The silhouette was each of their favorite running silhouettes in Nike’s archive and the mission was to conceptualize two different colorways of the retro runner and sell them exclusively at Stussy’s London location.

Not only do they remain hard to find today, but they generated a heightened demand by limiting production. A method that other brands would shortly begin to adapt to spark influence in their own way.

Nike’s first official collaborative footwear project with an apparel brand in the States debuted in 2001 with Stussy’s interpretation of the Dunk High, which featured two different renditions of the nostalgic basketball shoe.

The silhouette itself was adopted by skateboarders who found the Dunk outsole ideal for increased board feel, which led to Nike establishing the SB line just one year later. Aside from the premiere of a double label collaboration, this also marked the first time in history that the Swoosh on the Dunk would utilize another fabric other than a traditional leather, featuring ostrich paneling on the brown iteration and snakeskin on the black.

Available exclusively at Stussy Chapter stores in New York, London, Tokyo, and LA, there were 12 pairs of each colorway restocked every day for two weeks straight, which led to people consecutively lining up outside the store every morning until the shoes were sold out.

All those lines you’ve waited in over the years to get a pair of kicks? These guys invented that idea.

Following the Dunk collaboration, the duo linked up on the Blazer Mid in 2002 for two different renditions of the classic basketball style that was also later adopted by skateboarders.

Still regarded as one of the most popular Blazer collaborations ever, they remain a coveted collectible amongst streetwear and Nike collectors alike.

Stussy worked in conjunction with Nike to bring back the Air Huarache Light in 2003, which originally debuted ten years prior and was reissued for the first time in 2002.

Two different colorways were unveiled – each sporting a classic mesh and leather formation, while a select handful of friends and family, as well as promotional pairs, were stamped with the Stussy logo on the side.

This was the first time that Nike put another brand’s logo on their shoes.

To celebrate Stussy’s 25th anniversary, both brands teamed up on the Court Force for a complete reinterpretation of the retro basketball sneaker.

Four different renditions of the silhouette appeared with crocodile overlays, city prints on the insoles, the nostalgic Tom Tom print on the tongue, and New York, London, Tokyo, and LA stamped across the heel collars.

This was also the first time co-branded tees with matching designs were released alongside a collaborative project like this. Additionally, some of the OG samples featured various song lyrics but were never approved for actual production.

Nike SB came up with the Team Manager series in 2005, which consisted of four brands and five different styles of the Dunk.

The Neapolitan iteration was Stussy’s take on the Nike SB Dunk Low, which leveraged the inspiration of Robbie Jeffers who was the brand’s skate team manager at the time. The shoe’s name draws influence from the ice cream flavor itself, blending the hues that match the chocolate, vanilla and strawberry flavors accordingly.

The cherry on top is literally a cherry caricature itself, which appears on the tongue tags, while a waffle cone graphic emerges on the insoles.

Stussy’s World Tour Project in 2006 incorporated the inspiration of over 40 different artists who applied their own signature design to the Stussy World Tour Tee.

Nike was also part of the project, working with the streetwear brand on three different footwear categories throughout the collection. The Stussy x Nike World Tour Dunk featured two colorways of the low-top silhouette, which would combine the Free 5.0 outsole, while also adding in a forefoot strap up top for Stussy’s first-ever hybrid design. Stussy World Tour branding appeared on the tongue, while the Swoosh was outfitted with a premium ostrich leather for an elegant appeal.

Also included in the World Tour collection was the Free Trail 5.0 offering, which rendered the barefoot running silhouette with a trio of outdoor-inspired color palettes and Stussy World Tour branding on the interior. Lastly, the shoe incorporated a buffalo print onto the heel panel for a rugged appeal.

Influenced by Nike SB’s collection of skate-specific Dunk silhouettes, the World Tour rendition of Stussy’s collaborative Dunk High featured four different colorways in the capsule that represented the different cities where Stussy holds one of their chapter storefronts.

Constructed with a buffalo plaid sockliner, the Stussy World Tour print was featured on the underlays, and ACG laces while the shoes also incorporated Cordura on the ankle and tongue with an ostrich leather on the Swoosh.

In 2008, Stussy partnered with Nike on the Neighborhood Blazer “Boneyards” edition, which commemorates original Air Jordan 1 offerings and their OG color schemes.

In conjunction with Stussy’s Neighborhood “Boneyards” variation of the Blazer, the collection also incorporated the Terminator basketball sneaker that’s accented with Boneyards graphics on the heel and insoles. The Swoosh also utilized a dotted outline for its formation, as opposed to an additional layer stitched on top of the quarter-panel.

Stussy and Nike are no stranger to partnering for special anniversaries, so the pair partnered up once again in 2010 to celebrate Stussy’s 30 years in business.

Incorporating three different renditions of the All Court Mid, each shoe was contrasted with the Stussy “SS” link logo on the tongue, while the phrase, “Past, Present, Future” lines the interior. Furthermore, the collection also included the Stussy x Nike Sportswear letterman jackets and a co-branded tee.

Stussy went deep into the Nike Basketball archives to bring back the Sky Force 88 Mid, which included four renderings of the classic hoops sneaker.

Each silhouette was constructed with a cotton and canvas formation in either tonal or camo offerings with the “SS” link logo featured on the tongue.

Stussy aimed to unite the snow, sand, and street tribes with their S&S collaboration with Nike from 2011 featuring the Dunk High OMS, the Lunar Braata Mid, and the Mogan II.

All incorporated winterized performance technology that enabled the wearer to comfortably embrace the cold-weather conditions, while confidently navigating rugged and off-road surfaces.

Stussy welcomed members of theirs and Nike’s tribe with a duo of Trainrendors that paid tribute to cross-over and hybrid designs alike.

The shoe also celebrates the cross-trainer’s conception in 1987 when Stussy was uniting sub-cultures, like skate, surf and streetwear. This particular style references elements of both skate and snow, readying it with technical elements, like a rugged outsole tread, forefoot strap, and reflective details for visibility in low-light conditions.

Stussy and Nike celebrated 15 years of working together with a trio of Air Max 95 offerings that commemorate the sneaker’s correspondence in both London and New York’s underground music scenes.

Each offering appears with a similar color palette that incoporated a neoprene tongue application with the SS link logo on the tongue and Shawn Stussy’s iconic signature on the outsole. 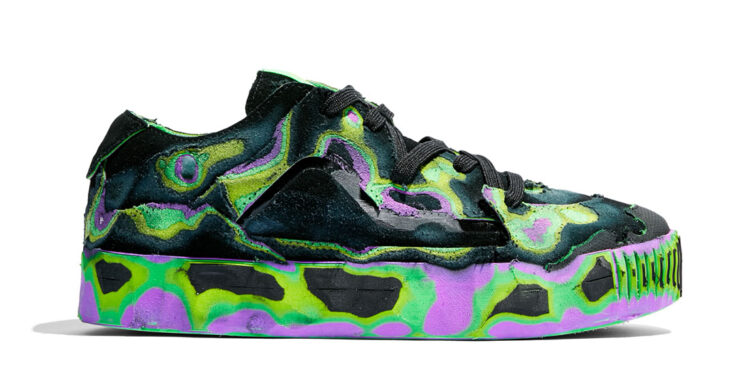