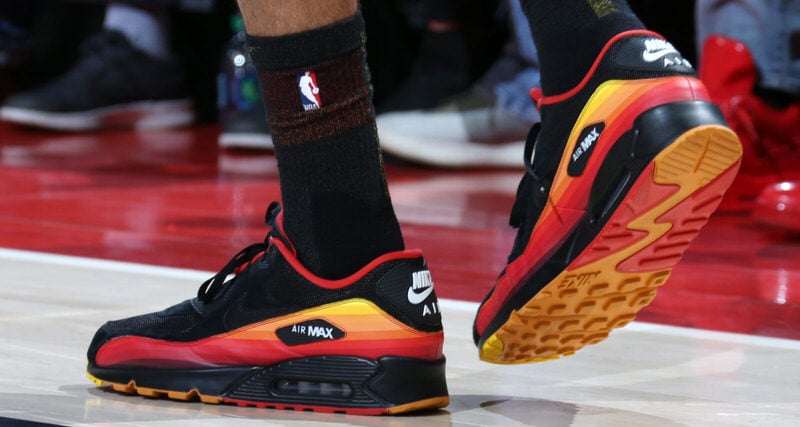 Who says man was not meant to hoop in running shoes?

Certainly, anyone who’s balled on the regular has played with or against someone who’s handed out buckets in a pair of Brooks.

When you think about it, the only difference between a pair of running shoes and a pair of b-ball shoes is lateral support and occasionally height. Other than height? Pretty much apples to oranges.

Last night, PJ Tucker shocked the world by playing in the OFF-WHITE x Nike Air Max 90. While Tucker has hooped in everything from Air Yeezys to OFF-WHITE Jordans, it was still a shock to see the small forward choose to check Rodney Hood or be willing to switch onto Dame or CJ in a pair of low tops that live in the lifestyle space.

Who else is an honorary Kicks on Court member of the Runner’s Club.

+ When Gilbert Arenas was making the switch from the Warriors to the Wizards he was also moving from Reebok to adidas
+ Said to have hooped in Air Max 95s during his high school days in Cali, the speedy combo guard was always big about feeling fast on court

+ First off, let’s not overlook the AND1 socks in the first photo
+ In preseason of 2003, Gilbert Arenas was hooping in Reebok runners straight out of JC Pennys as seen above and also handing out buckets in the “Hyper Blue” Air Max Plus

+ Swaggy P pulled out the Yeezy 500 on the road to his first NBA championship
+ Though the 500 resides more in lifestyle than running, it does feature an archival EQT sole stolen from the KB8 III

+ For Opening Night of the 2019-20 NBA Season, Trez held down home court in the “Double Crossover” Questions but also the UNDFTD x Reebok Instapump Fury colorway inspired by AI’s rookie signature
+ While the shoes slipped off, Trez didn’t slip as they got the win over LeBron and the Lakers

+ PJ Tucker put up 13 points and played D in the OFF-WHITE Air Max 90s
+ While another KOC legend that we’ll show later plays in AM90s often, this was a first for PJ

+ Like Swaggy, PJ also played in the Yeezy 500
+ When tied tight could these be a sleeper on court?

+ Thabo was playing in Hyper hoop shoes from the Nike camp in his early days in the league
+ When that Air Max 1 Mid dropped on Nike iD though? Well, everything changed

+ The AM90 has become for Thabo on court as the AF1 did for Sheed
+ Getting love back from Nike, the swingman has seen his own iD creations come to life while getting gifted a PE from the Swoosh, too