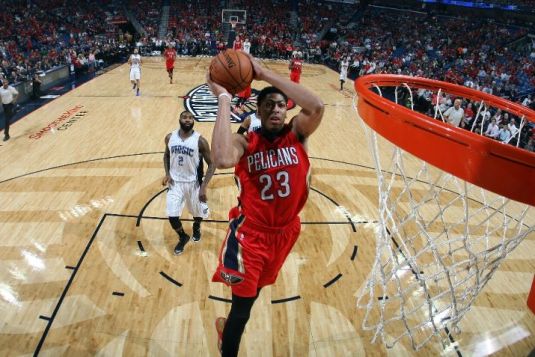 In last night’s season opener, Anthony Davis powered the New Orleans Pelicans past the Orlando Magic by recording a whopping 26 points, 17 rebounds and nine blocks in a red and gold Nike Hyperposite PE. If you recall, this was the exact same Hyperposite that Davis debuted in the 2014 Rising Starts Challenge during All-Star Weekend earlier this year.

What’s surprising about Davis’ choice of footwear is that he has been faithfully wearing player exclusive versions of the brand new Nike Hyperposite 2014 throughout the FIBA games and during preseason instead of the original Hyperposite model that he wore last season. View these kicks, plus James Harden’s Nike Zoom Run The One PE, in today’s edition of Kicks On Court.