Chances are you’ve been hearing NY-based rapper Sheck Wes‘s name a lot lately — which would make a lot of sense. The 19-year old star has been making noise in the game since early 2017 with his songs “LeBron James” and “Live SheckWes Die SheckWes,” all leading up to his recent announcement of signing to Travis Scott’s Cactus Jack Records.

One thing that stands out about Wes’s style is that, while paying homage to today’s major brands like Off-White and Bape, he still manages to “keep everything Sheck Wes” and maintain a high sense of individuality. Best yet, top-shelf sneakers are never left out of the equation.

Growing up in the sneaker shops and running 12AM pickup games at Kingdom Park with University of Texas MBB star Mohammed [Mo] Bamba, the Harlem native continues to make a name for himself both on and off the stage. Check out the full interview below and be sure to take a look at Sheck Wes’ My 5 coming soon.

NK: You’ve got heat on your IG. You’re a hooper too right?

SW: Yeah most definitely. I played basketball damn near all my life. Basketball was the first reason why – well, I started making music as a kid –  but when I turned about 12/13, that was when I started taking the sport more serious and playing AAU. Then moving back to New York. That alone made me take basketball way more serious, ’cause it’s nothing but basketball out here.

NK: What made you pursuit music so early?

SW: When I was 10/11, I used to listen to Kid Cudi. And my government name is like Kaw-dee, so I used to call my self Kid Kaw-dee.

I lived in Milwaukee, too. So, coming from New York, I had this little rap group called The Milyorkerz. It was me and a couple of my friends from school ’n shit. I was just making music on my MP3 player. Rip beats from the internet. You know, shit like that. Making those little songs that kids make.

Part of it as well was that I grew up in the sneaker store. That’s where I was hearing this Kid Cudi and all this stuff, ’cause my mom had the store two doors down, it was an African hair braiding shop. The sneaker store was called Number One Sports, they had like a Nike contract. I was basically like the barbershop kid in the sneaker store, c’ause my mom had the salon. There was females in there all day so I would go over there with the men. I ended up becoming like part of their little family and that’s how I got into some knowledge on sneakers.

NK: Not a bad relationship to have. As a hooper – I’ve been hooping for a while too – I’m curious, has your relationship with the sport shaped your sneaker collection in any way?

SW: Most definitely. Right now, I’m a victim of Nostalgia. ‘Cause I’m looking at all these shoes now like, bro. Right now I’m looking at Big Bangs, DB 4s, OVO 10s, some old Bape-stas. You feel me? Big Bangs I went and got those cause when I was a kid, I couldn’t get them. They were just so poppin’. Like, crazy. Like All-Atar Game LeBron 9s was so poppin’.

It comes as a type of flex too, cause the way I wear my shoes, is like, well… I wear my Doernbecher 4s everyday. That’s like my work shoe. You feel me? I know it’s a bit disrespectful to people’s desires, but I just don’t really believe in dead-stocking shit. I really believe you should just wear your shoe. 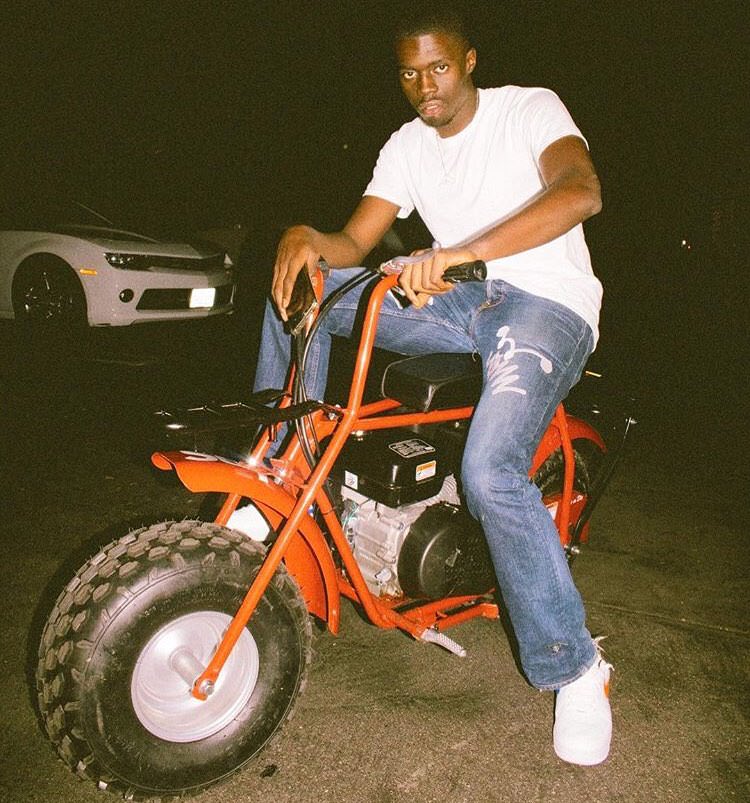 NK: I think that comes with just being a hooper, too.

Sometimes what I used to do was take my Gamma Jordan 11s, or whatever I had, and turn them from my ‘get fly shoes’ to my basketball shoes, and that helped with Nice Kicks — you get what I’m trying to say? I remember seeing San Diego State like two years ago when I was in school – ’cause I would go to the library bro, and you know they block mad websites in school. But the only website that wasn’t really blocked was Nice Kicks. So I would watch CSS, well, not watch, but I would look at all the shit. College KOC, KOC – and all these kids had OVO 10s! I’m like Damn, those shits are hard bro, AND 10s are a great basketball shoe. And in New York a lot of dudes play in retros period, so I was like, Man I need these. But back then, I didn’t have no money to get them. But now, all praises be to the Most High and everything, I’m able to do a lot more shit.

I used to be in school all the time, yo da-da-da look at this, yo da-da look at this. Then part of it too was having a friend like Mo’ Bamba who would go to Peach Jam and all this stuff and come back to the block with all this gear and all these sneakers. You’d be like, Damn, I want shit like that too.

NK: How did you and Mo Bamba meet?

SW: Damn. I mean, we all knew each other forever cause we all grew up in the same neighborhood. The difference was that Mo and them would be there during the school year and I’d just be in Milwaukee. So I would have to come back, you know? So I can’t really even remember, I just know me and Mo got closer, you know, when we all were like in that basketball community. Then being from the same neighborhood, we would all play these 5-on-5 games that would go from midnight till the wee hours of the morning. Or sometimes we would work out, you feel me. Mo would be on one side of the court working out, someone else would be on the other side of the court working out. And all of this is happening outside. We would see the craziest shit happen. I remember a coach from Arizona came to one of the games at night bro. Like at night time, swear to God. Middle of the night just to come watch Mo play pickup in the projects, at one in the morning.

Part of it was motivation, you know, a player like Mo he’s supernatural. Since he’s tall you can’t really relate, but you can relate when ya’ll from the same place and you can really go wild — I can make it out too. And now we got what 2-3 more kids from my neighborhood going D-1 too? It’s a blessing.

We never played together in AAU, but he would take me to his practices and shit. It was cool.

NK: What’s the first story that comes to mind about you and Mo.

SW: Mo’s the only person that ever dunked on me. For real. Let me see, what else… Mo’s just hilarious bro [laughs], sometimes he be on this super reserved, laid back vibe. But yeah.

NK: Did you grow up immersed in the streetwear culture or was that something you had to find for yourself?

SW: I grew up IN this culture bro. Even when it comes to like buying and reselling shoes. In New York there’s this huge group called the Kicks Kings. They’re from my neighborhood, too. Shoutout to the Kicks Kings.

They’re like this huge reselling group. They would get every sneaker — like, when I say every shoe, I mean every shoe. We would need some cash, so we would go get a shoe then run to sell it and make, you know, $80 or something like that. But that was how a lot of kids were making money. A lot of kids are still doing that too.

It was so big in New York, so I would come back from that sneaker store in Milwaukee and jump straight into the resell market with all my friends.

NK: What was the first pair to set it off for you?

I got like three pairs of Concord 11s. I got my own shit with NIKE. Ya feel me? I’ma have to go. Well, I broke my ankle, before playing in the Venice Beach Kobes. Actually, the ankle I had the boot on in the “Mo Bamba” video was the same ankle I broke. But the video, I rolled my ankle the day before the video in the Aunt Pearl KD 4s. Shout out to KD, shout out to The University of Texas.

But the sneaker to really change it for me, to be like man I really got this shit? had to be the Varsity Red 6s. Those are probably my favorite Jordans. The 4s are my favorite silhouette, like it’s the best go-to shoe for me. But when I got the Varsity 6s I was just like, Damn.

It was crazy cause I got the 6s, then I got the Breds, then those nasty pink infrared shits came out, then the new Breds came out. There was this time when having the Bred 1s was such a flex.

In NY all the bad kids would meet up on 42nd Street and buy, sell, trade sneakers. You’ll hit up guys on Facebook. You know. I remember like going broke n’ shit sometimes, like I’d have some heat but I’d have to sell it.

NK: You signed to Cactus Jack Recently. How did that come about?

SW: I mean, Trav and them reached out to me. It was just like, Why don’t we do all of this together, you know? Ever since Trav and them reached out to me they’ve been showin’ a lot of love. Everything been original. They always have me around when I’m out there; we’ll go to the stu, or play 2k. Everything is genuine, like ain’t nothing fake. You feel me?

Keep up with Wes on Instagram and be sure to peep his new video for Mo Bamba out now.

Special thanks to Sheck Wes.