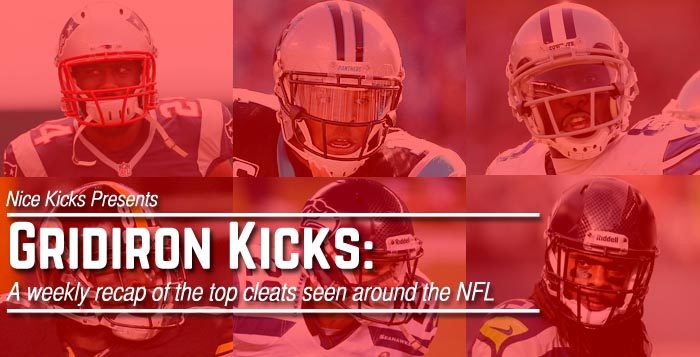 Like many things in life, unexpected occurrences happen from time to time. With this in mind, our normal video recap of the top NFL cleats will air next week with a special appearance from several Seattle Seahawks. However, we’ll still showcase some of the best models seen around the league as we provide you a special editorial edition of Gridiron Kicks: A Recap Of Week 7’s Top NFL Cleats.

In what has been a consistent theme throughout the 2014 NFL season, the Air Jordan 6 model has been a popular choice, or “stipulation” amongst Jordan Brand athletes. From Charles Woodson to Earl Thomas, a variety of different colorways were seen involving the aforementioned silhouette. Dez Bryant of the Dallas Cowboys took things to greater lengths as he sported two different Jordan 6 models during Dallas’ game against the New York Giants. What was the star wideout’s reasoning for the abrupt change? Well, as provided by Dallas News, Bryant states: “I feel like I have to go back to being me, wear the things I normally wear and don’t try to do anything different.” Well, the way Bryant preformed in the second-half of that game, it seems evident that he’ll stick with what works as the Cowboys look to continue their winning streak heading into Week 8.

Charles Woodson in the Breast Cancer Awareness-inspired Air Jordan 6 Low and Earl Thomas in a PE edition of the Air Jordan 6
Pages: 1 2 3 4 5