Andre SWAGassi. Welcome to today’s episode of @nicekicks Throwback Thursday, where we once again remember a Nike tennis silhouette that has remained locked away in the Nike Archives vault for the past two decades: Andre Agassi’s 1997 Nike Air Zoom Pounce.

Before we discuss the sneaker itself, first a word about the social context of the time surrounding the athlete. Like Nike sneakers, life has both highs and lows. In 1997, Agassi reached a low point in his professional career when he dropped to a rank of #141. There were many reasons which were attributed to the drastic drop in his performance. Following his divorce from Brooke Shields, Agassi re-dedicated himself to the game of tennis and improved to #122 in the standings to finish the year. Within the span of a year, Agassi beautifully rebounded from his career low rank to reach #6 in the standings – a record turnaround.

Considering his resurgence, Nike adopted a new style of the Agassi line which was a stark departure from previous years. Gone were the once bright, vibrant, avant-garde color blocking, which were replaced by basic, toned-down, traditional colorways which remained aesthetically pleasing yet subdued. An example which includes the topic of today’s post, the Air Zoom Pounce, in the white/black-lemon twist colorway. Featuring a very forward-thinking, low-profile, lightweight design and made of high quality materials, the Zoom Pounce includes all the necessary ingredients for a tennis sneaker classic in the making including a Phylon midsole, encapsulated heel with forefoot Zoom Air cushioning, TPU midfoot stability plate and DRC Court outsole. Weighing in at just 12.1 ounces, the Zoom Pounce made for the perfect tool by which to return a 134 mph serve.

While not one of the more popular, widely known Agassi tennis silhouettes aside from hard-core tennis enthusiasts, this model remains extremely difficult to find in its original condition today as most consumers wore their tennis sneakers at the time. A retro in need would make an instant cop, indeed.

So, go ahead. Play like Andre, and wear the Nike Air Zoom Pounce. The only question that remains is whether to throw your soaking wet DRI FIT top and Agassi “A” hat to the crowd after your victory. 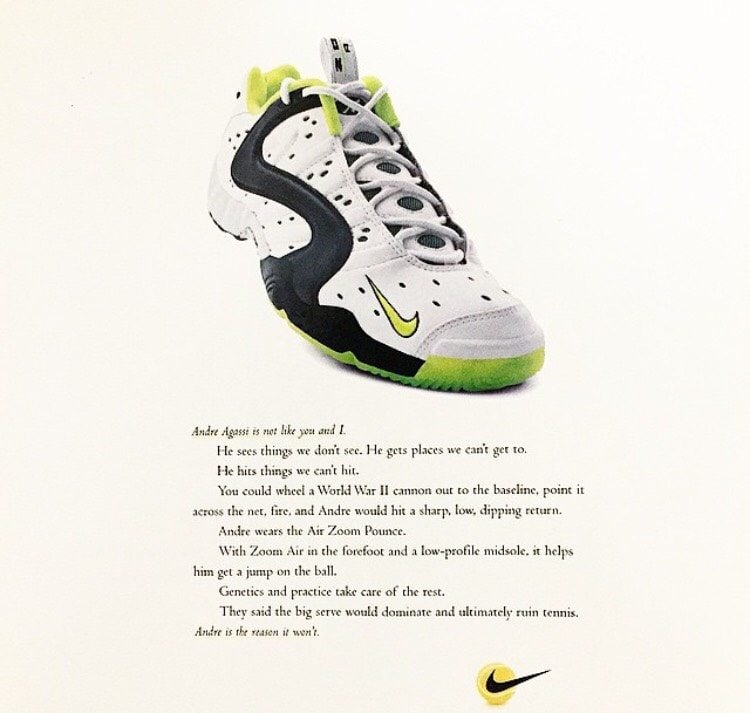