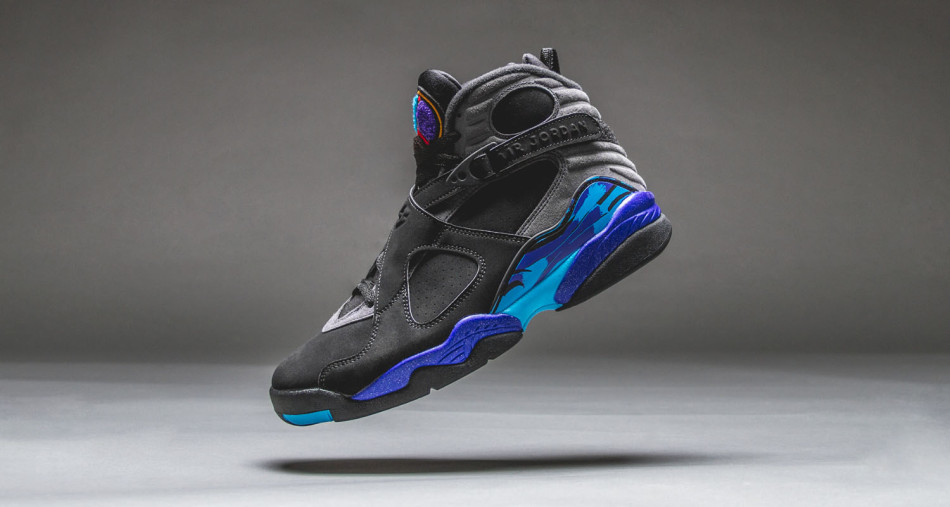 Tomorrow will bring us the long and highly anticipated return of the Air Jordan 8 “Aqua”. The Aqua 8s made their debut in February of 1993 when Michael Jordan stepped foot onto the court at the Delta Center for the 1993 NBA All-Star Game. In the unforgettable game, Jordan put up 30 points in what would be his last All-Star Game appearance before his first retirement. The game was filled with many highlights and fans on hand got their money’s worth when the game went to overtime where the West narrowly defeated the East.

While the first retro of the “Aqua” Jordan 8s came 14 years after their initial debut in 2007, the wait this time was just 8 years. While many would have probably liked to have the Aquas back sooner, the wait until 2015 means that Jordan-heads will be recipients of a Remastered Retro Jordan 8 in the coveted colorway. For starters, the shape is much more true to the original than the 2007 retro. More noticeably, the back panel of the shoe is a lighter grey than the 2007 release which was virtually black making the shoe just one tone on the upper panels. Lastly, but with creating much conversation, the 2015 retro release of the Air Jordan 8 “Aqua” feature a slightly sparkly midsole and outsole. Many heads have been against this finish, but OG-heads are very appreciative of the original touch dating back to 1993.  Nostalgia!

Are the “Aqua” Jordan 8s a cop or drop for you?