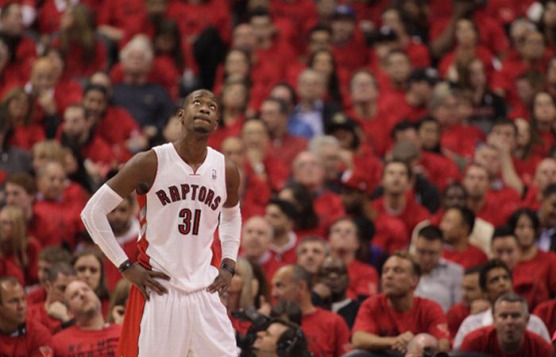 It’s no secret that the Toronto Raptors take pride in wearing some of the hottest footwear on a nightly basis. Guys, like DeMar DeRozan, Amir Johnson and Terrence Ross, consistently switch their feet in and out of retros and new silhouettes. The latter headlines our Kicks On Court column today, as he was spotted in the “Elephant Print” Nike Air Foamposite Pro during the Raptors’ blowout win over the Philadelphia 76ers last night. We also spotted Tony Wroten in the “Metallic Silver” Nike Chuck Posite in the same game. View these kicks plus more in today’s edition of Kicks On Court.

RELATED: Kicks On Court Weekly: A Visit to the Hottest Sneaker Shopping Spot for NBA Players