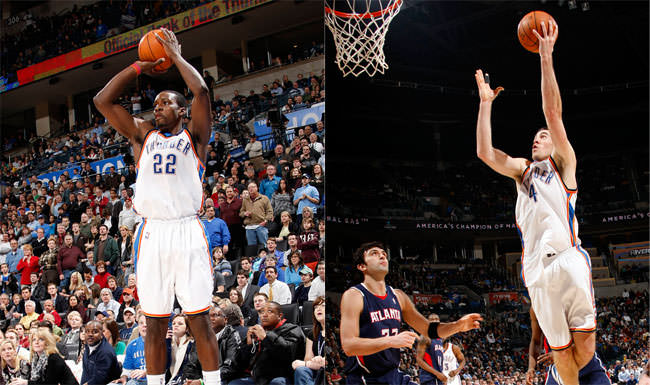 Earlier today, we showed you the three new Nike KD II colorways that are set to release later this year. While those will be easily attainable when they do release, we have spotted a couple of Kevin Durant’s teammates sporting? yet another never-before-seen KD II. With that said, check out today’s Kicks On Court to see this new colorway.

Thunder forwards Jeff Green and Nick Collison helped Oklahoma City beat the Atlanta Hawks while wearing a new, white/navy blue colorway of the Nike KD II. The predominance of the upper is comprised of white leather, and its navy blue hints are seen on the midfoot strap, swoosh, tongue and sole. If you recall, this colorway is very similar to the colorway Durant wore in the USA Minicamp this past summer. Is this one of the better KD II colorways to date? Click here to view these kicks plus more worn by Joe Johnson, LeBron James, Vince Carter and others.