Sometime around 1976, in Los Angeles, there was an uprising of women’s focused art shows. Exalting works from women both foreign and domestic championed the city’s gender slanted art scene. This feminist upheaval was based largely on the fact that the works of these complex and talented women were going unnoticed by the masses. More intimately, by the galleries and museums that championed their collective hauls as best in show even while exclusionary of a feminist perspective.

With 150 some odd shows to speak of in the Los Angeles area alone, under-appreciated artists of the fairer sex were thrust into a world grossly unimpressed with their genius. Georgia O’Keeffe, among the foremost painters and feminist of our time, defiantly refused to allow her musings to take part in the citywide recognition of women’s art. O’Keeffe felt she wasn’t just a great female painter, but easily one of the best painters there was. Both steadfast and unwavering in her truth, O’Keeffe would not allow her work to be disrespected by gender segregation. She felt that her work, and that of other brilliant women, firmly held up against her male counterparts. Often times bettering them outright.

Women are, and historically have been, routinely and unfairly categorized. This, of course, extends to people of color of any gender. We watch black films. We dine at Indian eateries. We take in Latin art shows. From a holistic viewpoint, these things aren’t truly of their own volition but simply one part of the whole. They’re simply films, restaurants, and art shows with stories that express a particular perspective. Not ethic subsets or lesser versions of globally accepted genres. 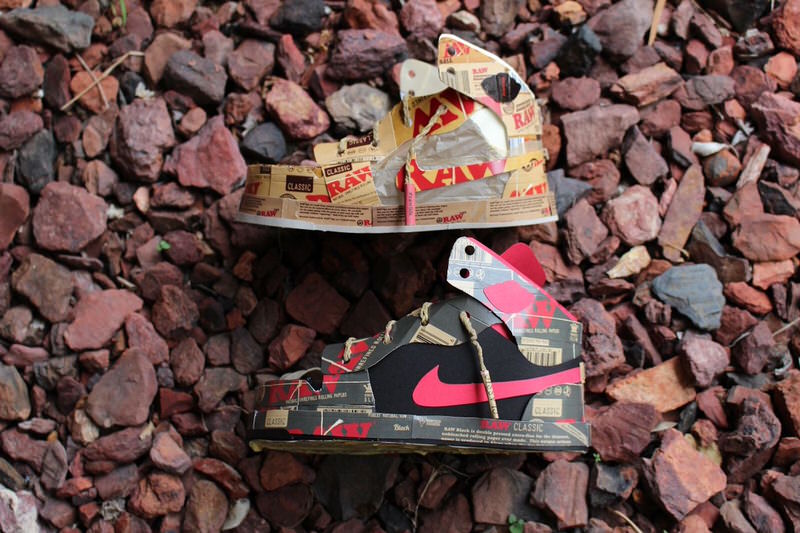 Jennifer Aquino is an artist whose work isn’t compartmentalized nor segmented by her womanhood or Latin roots. Many of her musings would technically be considered “sneaker art.” Yet she remains, unequivocally so, an artist without restriction. Uncategorized by her gender or roads commonly traveled, Aquino grew up visiting museums and sneaker shops with relative duality. Each informs the women she has become. “The Norton Museum of Art was big when I was a kid,” Jennifer recalls. “We also took [school] field trips to the Kravis Center in West Palm Beach.”

Although not an art school grad, Jennifer cultivated her love for art through experiences that sharpened her aesthetic senses. As an advantage of her middle-class upbringing, her parents supplied her with the tools to fuel her artistic endeavors. In greater focus, given her parent’s traditional Dominican roots, art supplies almost always trumped high-priced sneaker purchases. “My parents would buy me crayons over a pair of sneakers any day. Being of Dominican descent, they were very old school in believing that girls shouldn’t wear ‘boy sneakers.’ I was lucky to get some girly LA Gears.”

Scaling her time between longing art strolls and budding sneaker obsession, the latter was largely influenced by her elder cousins who played the role of siblings. “Growing up with my older [male] cousins, they were big sneakerheads so I was lucky to always be around sneaker culture. Any Jordans or Timbs I had early on would be hand-me-downs from them.” 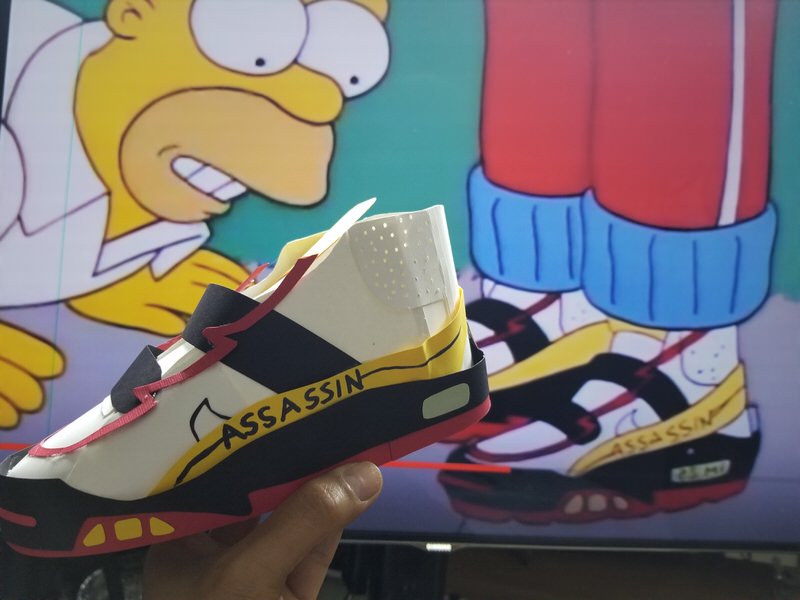 Aquino, Palm Beach, Florida born and raised, is just old enough to remember a much simpler time in sneaker culture. It effectively serves as a baseline for how she approaches ideology and subsequent creation. “As long as I can see it, I can build it,” she affirms. “I don’t care to use a computer to print out logos. I enjoy the uniqueness of free-styling things. It gives the piece character.”

There’s an antiquation in Jennifer’s approach to creation. Yet the path her art travels to completion is inherently contemporary. Much of this starts from a place of childhood adoration. “I remember the excitement of waiting for the Eastbay to come in the mail just to see [the sneakers] coming out. Back when there were no lines or tickets to get them.”

Those times aren’t far removed from Jennifer’s thoughts. In fact, her work regularly circles vintage sneakers and the brands that produce them. Moreover, in tighter perspective, what informs Jennifer’s personal visibility — or lack thereof — is the sexualization of women in overtly masculine spaces fostering an environment that deviates from their inventiveness and industry-driving brilliance. 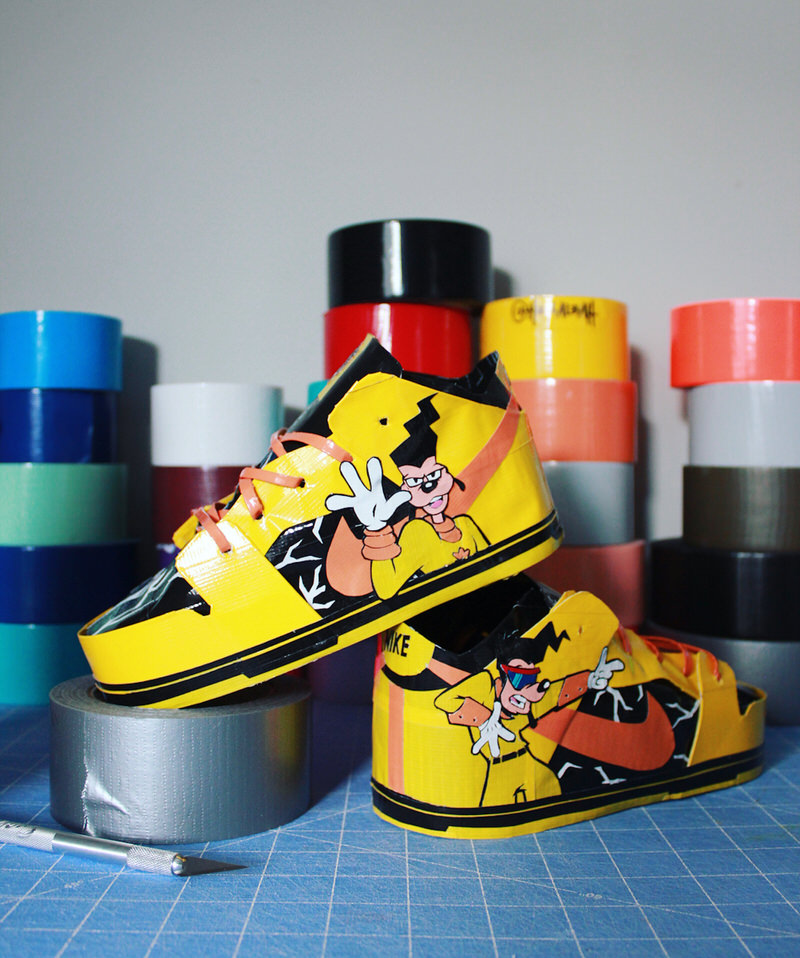 “Being a Hispanic female artist in a male-dominated culture has its ups and downs,” Jennifer freely details. “I don’t post many photos of myself because I truly want to keep it about the art. I’d rather have people respect my work and be taken seriously as an artist rather than just post selfies to get likes and follows.” The glowing abstraction in her work — not her external features — removes all ambivalence ensuring her talent prevails.

Jennifer, and many women like her, are urgently closing the gender divide in their respective fields. Male privileged art exhibits and adjoining sneaker functions are still a fatiguing norm. Yet the widening spotlight on female artists, designers, executives, consultants and their collective works is as present now as it was during the aforementioned revolt in the mid-1970s that continued into the ’80s. Jennifer hopes to use this time to both share her work but also inspire and educate others. “Ultimately, my goal is to open my own shop. I’d like to teach classes there and feature other artists as well. Giving others a platform to share their art.”

Enamored with commission work and ambitions to host her very first solo show before the end of the year, it comes as no surprise that Aquino is inspired by everything that orbits her peripheral. Be it tangible or otherwise, she sees no need to choose favorites. Instead, she allows inspiration to flow from all base points, not just those coupled with her heritage or feminist sensibilities. “I never really looked at it like that. I just love all art, regardless of race or gender. I find art in everything around me.” 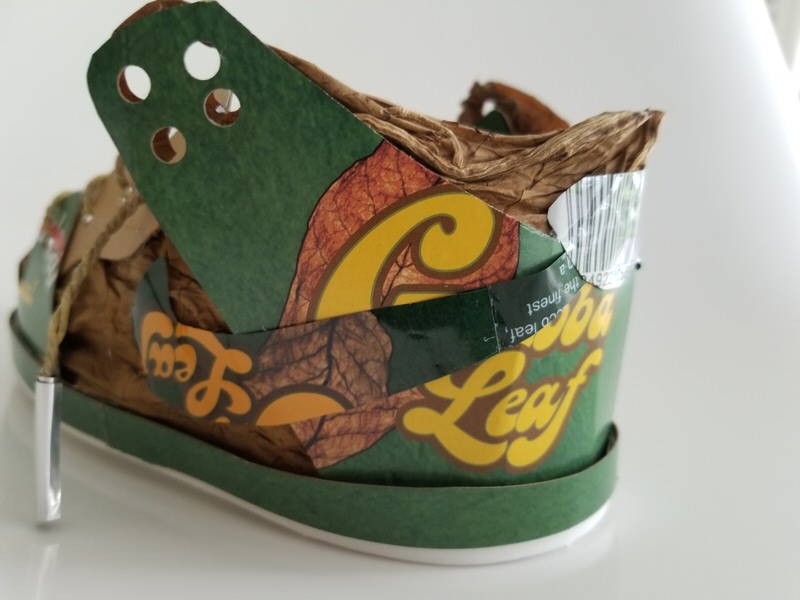 Keep up with Jennifer’s art on IG.