Knock, knock. Who’s there? Killa Cam. Killa who? Having gone everywhere from his home start in Harlem, Cameron Giles, better known as Cam’ron, has proven to be one of the most beloved figures in hip hop and fashion culture with the rap resume and style shifting moments to prove it.

From high school hoops at the highest heights to one stare and wink that had everyone wearing pink, the Child of the Corn turned Dipset general has moved with the motions in an extremely trend sensitive genre by setting them himself and playing towards patience and power moves (remember how much he caked off Killa Season on Koch?). As polite as they come, we spoke with Cam at the Reebok Classic x Footaction Classic in the Courtyard event to discuss everything from playing ball as a teenager with Ma$e to his next kick collab with Reebok. You’re gonna wanna read this, we really mean it.

Nice Kicks: How did the Reebok relationship come about?

Cam’ron: My man Dame reached out to us a few years ago and started sending us sneakers. I loved the sneakers he was sending us, so we started doing events together and even did a commercial with me and Juelz. We thought about it and said, ‘Why don’t we do a sneaker?’ The first sneaker we did was last April, the “Purple Haze” pair, and it was a success, then we did Part 2 this past November. I like both of them, but if I had to pick my favorite I’d say the “Purple Haze” ones. They both “Fleaboks,” Flea 1 and 2.

Nice Kicks: Can we expect another shoe with Reebok?

Cam’ron: We’re actually in the design process of the new shoe. I don’t have an actual release date yet so I don’t want to tell you when it’s coming out, but we’re in the design process now. We’re coming up with a few different concepts, we’re just being creative right now. We have a couple months and will probably come to a conclusion of what it’s going to look like soon. The way we do it with Reebok is they have particular sneakers that come out each quarter so we work around the sneaker that’s coming out that particular time. I have two different options of models but I haven’t picked which one yet.

Nice Kicks: Between hip hop, hoops and Harlem you have a lot of friends and fam. Any examples of who hits you up for a pair when a new Reebok collab drops?

Cam’ron: Everybody. I mean, mothers, aunts, sisters, cousins — I don’t have no sisters [Laughs] — but everybody, man. Not necessarily anybody who hoops because it’s not a basketball shoe, but everybody hits me up for shoes. I try to take care of as many people as I can.

Nice Kicks: On the subject of hoops, have you been playing much ball these days?

Cam’ron: No, I haven’t balled in a while. But if somebody challenges me I’ll be ready in about two weeks.

Nice Kicks: Who is the best rapper you ever balled with or against?

Cam’ron: I would have to keep it local and probably say Ma$e that I can think of. In high school, I played the point and when Ma$e came off the bench and into the game I moved to the two guard spot. After high school, I played JUCO ball in Texas at Navarro Junior College in Corsicana, Texas between Dallas and Waco.

Nice Kicks: Conversely, who is the best hooper at rapping?

Cam’ron: The best basketball player that can rap? Oh, Damian Lillard is nice. I like him. For me, if I had to pick somebody it would have to be him, he’s definitely nice.

Nice Kicks: Switching to fashion, we’ve seen you break a lot of looks from rocking pink to wearing capes a few years back. What’s next?

Cam’ron: We just put a new robe up on my website, Dipset USA. It’s velour with an encrusted Diplomat logo on the back and Dipset on the front. It just came out on Valentine’s Day and it’s red and white. 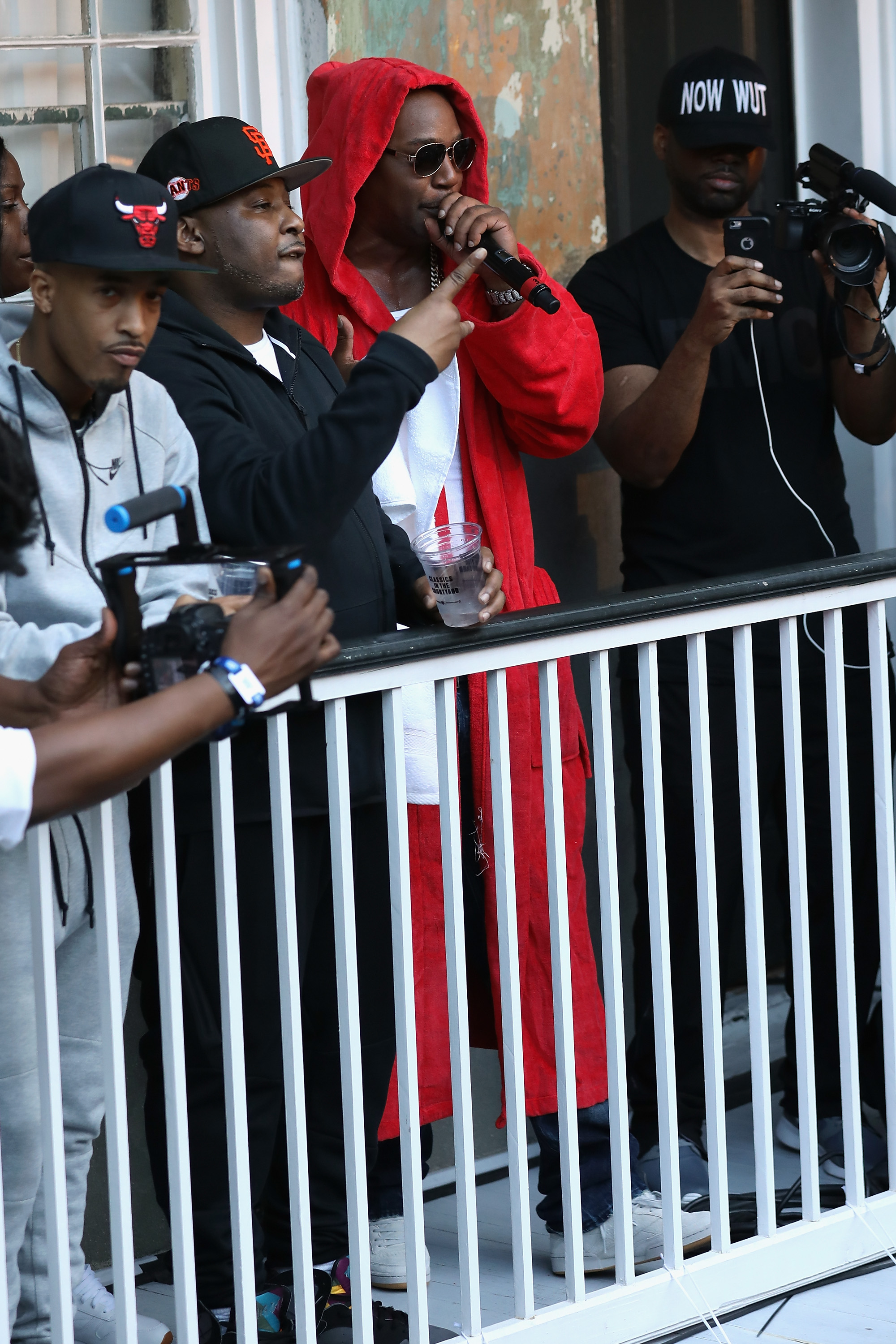 Nice Kicks: Coming up in Harlem, who did you look up to fashion wise?

Cam’ron: To be honest, just going outside. Everybody was competing and to be honest just competing with my friends. There wasn’t necessarily anybody I looked up to, my whole neighborhood was fly. I come from an era where the drug era was really big so everybody was really money’d up, buying Versace or Coogi or whatever it was. So, there wasn’t nobody in particular, but if I had to name somebody that people may know I would say Big L. He was a real fly dude, a little older than me. God bless the dead, he was really fly coming up.

Nice Kicks: Looking at this era of hip hop, anybody in the game whose style you admire?

Cam’ron: It’s weird, it’s strange, know what I’m saying? For me, I really don’t look at what people do too much, I just try do everything different. If I had to pick somebody, that’s a tough question because I really don’t know right now. I don’t watch what people do, I’d rather listen to the music. But as far as dressing, I’d probably say Nas. I saw him recently with a shearling coat on and that’s something I’d definitely wear. Even though he’s a little older and not necessarily rapping 24/7, I admire the way he dresses.

Nice Kicks: When recalling your music video history, does a particular outfit stand out as your favorite?

Cam’ron: My favorite outfit would have to be from the video I shot for “Get ’em Girls.” It was a red camouflage outfit I had on with the army pants and the army hat. You know what’s crazy? I recently saw a boutique that had something similar with the same camo look. That was always one of my favorites.

Nice Kicks: It seems like a lot of the VLONE stuff that A$AP Bari wears and the collabs A$AP Ferg has done really pay homage to that look. That’s respect.

Nice Kicks: Do you keep and archive your old video outfits?

Cam’ron: I still have them. Absolutely.

Nice Kicks: About five or six years ago, your face and Dipset logos started popping up on shirts and gear everywhere. Were you in on that from the jump or did you get hip to it and decide to make and produce your own gear?

Cam’ron: I wasn’t in on it early. I got hip to it and that’s what made me build my website and sell everything that everybody else was selling. [Laughs]

Pick up your official Killa Cam gear at Dipset USA.