Here at Nice Kicks we try to avoid hyperbole, but truthfully expectations were sky-high for the new Nike NBA uniforms. Playing to league standards and team tones, the first rollout of Swoosh stamped jerseys were just about exactly that — avoiding redesigns in favor of tradition while rebranding pre-exisiting looks. For fans with high hopes, it was a bit of a bummer.

Then the City Series jerseys happened.

Offering an alternate to traditional team takes or even celebrated throwbacks, the lively local looks were exactly what fans were expecting and hoping for in the new partnership, seeing personality injected in performance wear for a perfect marriage of sport and fashion.

While few fans will ever say the teams or the Swoosh went 30 for 30 — no ESPN — when unveiling the first season of City jerseys, the truth is the collection saw more hits than misses with perhaps the Miami Heat’s “Vice” Jersey proving hottest of them all.

Dialing down to South Beach, we spoke with Brett Maurer, the HEAT Graphic Designer behind Miami’s fluorescent “Vice” jerseys, to hear what went into design and what the reaction’s has been like from players and fans alike. Slip your sunglasses on and see what they had to say below.

Nice Kicks: City Alternate jerseys are something not just new for the Heat but new for the league as a whole. Take us back to when you were first briefed with the concept for the design.

Brett Maurer: Nike approached us about two summers ago about their thoughts on where they were gonna go with the new alternative uniforms. They told us more or less that they were going to go city centric and make it for the fans that have been their since Day 1.

There had been a lot of talk before as to whether there would ever be a Vice jersey for the Heat and it had been fueled by social media. With this we saw the opportunity to finally make good on that and bring a Vice uniform to our rotation.

Like anything else, it all started with research. We were digging through our archives, seeing what made the city tick, and going through all of it from South Beach Art Deco to ’80s retro graphics. We saw everything but our direction changed when we saw the Miami Arena all lit up in pink and blue. It played perfectly to telling not just the story of Vice, but the city and franchise history as well. It was a wrap from their as far as direction and then just going iteration by iteration to define the jersey as what it is now.

Nice Kicks: The league is known for being pretty PC, were there any issues with clearing the Vice theme or nickname?

Brett Maurer: The NBA definitely runs a tight ship in regards to logos and things of that nature. As far as the Miami mark/Vice themed ball and flame logo, the league had to approve that. As far as the jersey, it was designed in-house by our creative team and just working back and forth with Nike as the uniform provider. The league really trusts Nike in regards to their expertise in that.

Nice Kicks: Considering almost two years of work was put into these, what was the first wave of feedback when you finally got to present the Vice jerseys to both the players and the fans?

As far as the public, it had kind of leaked prior. We just kind of let them marinate on it as to whether or not it was real. We let them discuss. We already had our campaign so we let that go and once we did release it, it was confirmation to all those fans that had been discussing it. It’s been absolutely incredible to see the whole acceptance and love for these jerseys across every circle from fans to fellow designers. Hearing fans say things like, “I saw the Miami Arena mark, it’s amazing and it brought back memories and I’m almost in tears.” Hearing that sort of thing and knowing that you hit the mark? That’s what it’s all about and it’s really nice to hear that.

Nice Kicks: I don’t want to put you on the spot too much, but when briefed with a design task like this, do the players or fans come first?

Brett Maurer: We take it all into account. You definitely want something that the players want to wear and want to rep the city of Miami. They’re our biggest marketers and our biggest influencers and to not think about them would be a mistake.

With that said, this whole concept of this jersey was city centric and for the fans and with them in mind. I think we were able to check all the boxes of the people that needed to love this jersey. Going about the design process, we had to hit the brief and the athlete had to want to wear it.

Nice Kicks: Was their any pushback from the franchise or fans in regards to departing from traditional Heat hues?

Brett Maurer: In past years and campaigns we’ve departed a few times from our traditional color palette. In ’06 we did our Floridians jerseys and we’ve done the same thing with our Home Strong campaign. Leaving the color palette of the team was based on using the colors that have defined the city of Miami since the ’80s. But even leaving the palette, we sublimated that by using our classic silhouette from ’88 and also using the Miami Arena mark which has always been a part of our branding.

One of the biggest bits of feedback that I got that was great to hear was that if you stripped off ‘Miami’ and the logo off of it you could still guess it was us and see how it was rooted in our brand.

Nice Kicks: Definitely agree with that. How good of timing was it for the Vice jerseys to come out around the time Dwyane Wade came back?

Brett Maurer: This would’ve been the first Heat jersey Dwyane wouldn’t have worn since originally joining the Heat. When he came back he talked about needing to have it once he saw it. The fact that he was able to come back, put this jersey on and not miss a beat with us was incredible. He also came at a point when the campaign had been going on for a little bit and it really breathed new life into it. Again, this was for the fans and for it to have another huge moment with him in it was huge.

We put these jerseys out before Wade came back and they sold out — the whole team — within 35 minutes. We’d already gone to Nike asking for more jerseys and with him back we’ve already re-orderred twice. It worked out pretty well for us in that sense.

Nice Kicks: Jersey and shorts aside, there are also “Vice” socks.

Brett Maurer: Yes. The socks and accessories portion was all taken care of and produced by Nike. In addition to that, we also have an in-house fashion line called Court Culture where we produced a collection of clothes with the Vice theme in a more casual way.

Nice Kicks: We’ve seen in recent years teams like the Atlanta Hawks lace artists in attendance with their own personalized team jersey. My question is when can I purchase a Pitbull “Vice” jersey?

Cassandra Sigler [Miami Heat PR]: [Laughs] For this specific season since it was our first collaboration with Nike, we did not have customization. We’re looking into that for next year because on my end I’m always looking into outfitting artists — our local artists especially. Definitely stay tuned, that’s a goal for next season.

Nice Kicks: Lastly, am I right in thinking the City jerseys will only be worn for a year and will be replaced with a new design each year? If so, any clues to what’s next?

Brett Maurer: Currently the City jerseys will only be worn for one season. We’re looking forward to what Nike has in store for next year. It’s all about the collaboration between us and Nike. This was our first year working together and collaboration with somebody you’ve worked with only gets better. Of course we’re trying to top this, you know? 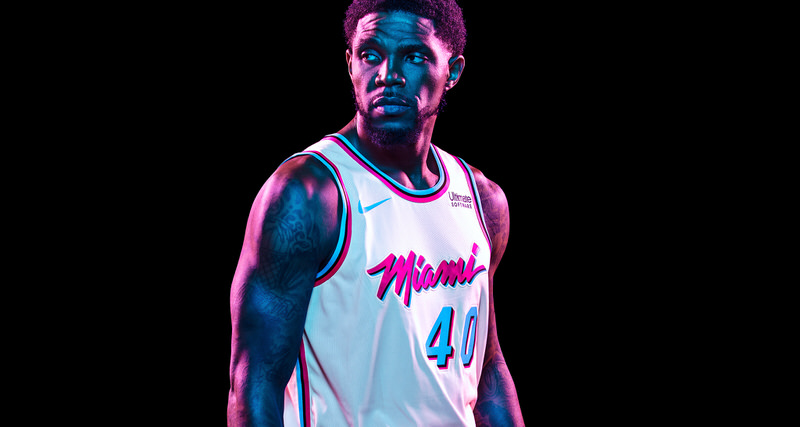 Jersey imagery/studio shots by David Alvarez for the Miami Heat. Dwyane Wade game shots via Sports News and by Getty Images via SLAM