In today’s climate, the Kanye West and adidas partnership is perhaps the strongest collaborative endorsement deal across the entire industry, as the Yeezy Boost 350 and 750 models have helped to elevate the portfolio of Boost-equipped projects for the brand.

As it turns out, the two were close to working together over a decade ago, albeit on a much more simple co-branded sneaker. The brand’s former head of entertainment marketing Gary Aspden recounts in the 2nd issue of Crepe City Magazine, available now on Crepe-City.co.uk, that the partnership actually dates all the way back to 2006, after Kanye expressed interest in a vulcanized edition of the Rod Laver.

Aspden met with Kanye and his business manager Don C in LA, and retells the following excerpt to Crepe City:

Gary Aspden writes:
“In 2006 there were meetings held between Kanye West and adidas, back before he had ever done a trainer collaboration with anyone. As I was in charge of adidas’s Entertainment Division at the time I was asked to lead those discussions along with one of the team who was based over there. We met with Kanye in the studio in L.A. where he was recording – I was impressed by the fact that he had no big entourage, just him and his manager Don. He was immediately welcoming and respectful when he realised I had been instrumental in that first adidas x BAPE collaboration (at the time he was a big fan of A Bathing Ape and adidas Originals). The discussion revolved around working with adidas on versions of the Rod Laver Vintage which was his favourite shoe at that time.

After much to-ing and fro-ing between Kanye’s team and the then head of adidas Originals, the project didn’t end up coming to fruition which I now believe was no bad thing, however, years later as everyone is aware, adidas and Kanye finally hooked up and collaborated. The result of that I believe has been something far more substantial than anything that was potentially on the table back in 2006 – a completely new shoe silhouette utilising a groundbreaking technology. Even back then Kanye was very clear about the fact that before anything he saw himself primarily as a designer and was determined to start his own line – I remember him showing us logo ideas for ‘Pastel’. I personally have had no direct involvement in the adidas Yeezy project (that is handled by the likes of Jon Wexler and Rachel Muscat) but in my view it arguably has more parallels with that first BAPE collaboration than anything I have seen in the last decade or so.

It takes a similar approach, and like BAPE in 2003, it creates a level of demand that is indisputable. These products are about so much more than a pair of shoes, they come with a concept and a watertight execution – it’s the entire package. He pays attention to every detail of the product, even down to the string used for the swing tags. I have huge respect for the fact that he personally made trips to the factories with Nic Galway and was hands on with the entire process. Given how busy Kanye’s schedule must be, it’s hats off to him for taking the time to pay that level of attention and showing that level of commitment to getting things exactly the way he wants them to be. No half measures.”

While there a few fake iterations of the alleged sneaker floating around online, former adidas Originals employee Ben Pruess took to Instagram today and posted up the one and only Kanye sample. You’ll notice a clean and simple white and brown colorway atop the updated version of the Rod Laver, along with Kanye’s “College Dropout” bear logo from the era screenprinted onto the heel and tongue.

Check out the first-ever adidas x Kanye sample below. Would you like to see Kanye remixes of some of the brand’s more iconic original silhouettes? Let us know your thoughts in the comments section below and on Twitter. 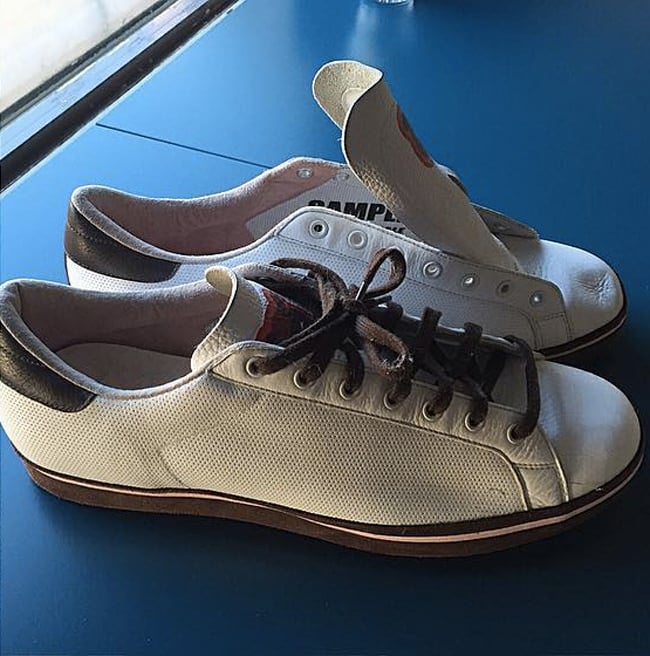 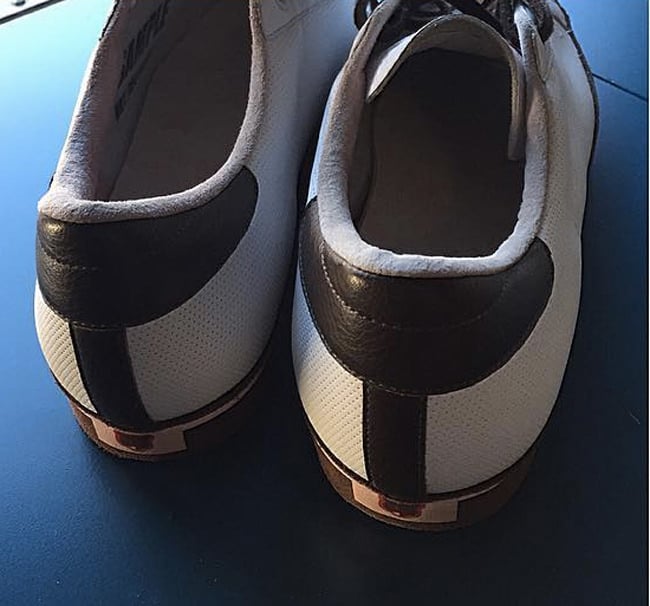 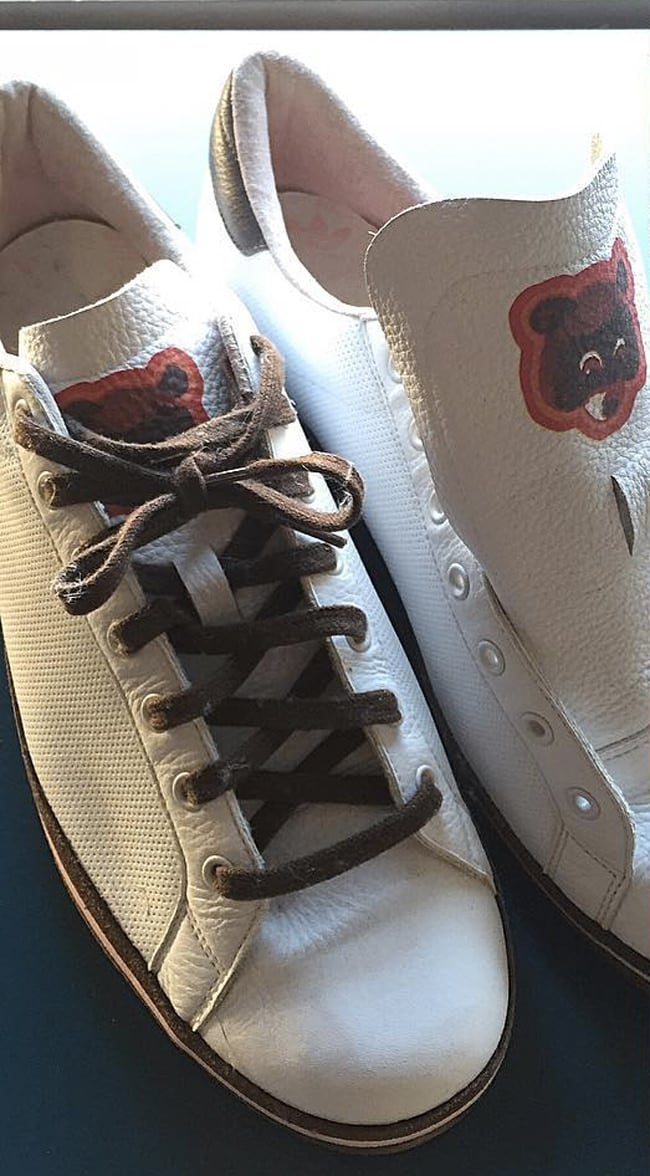 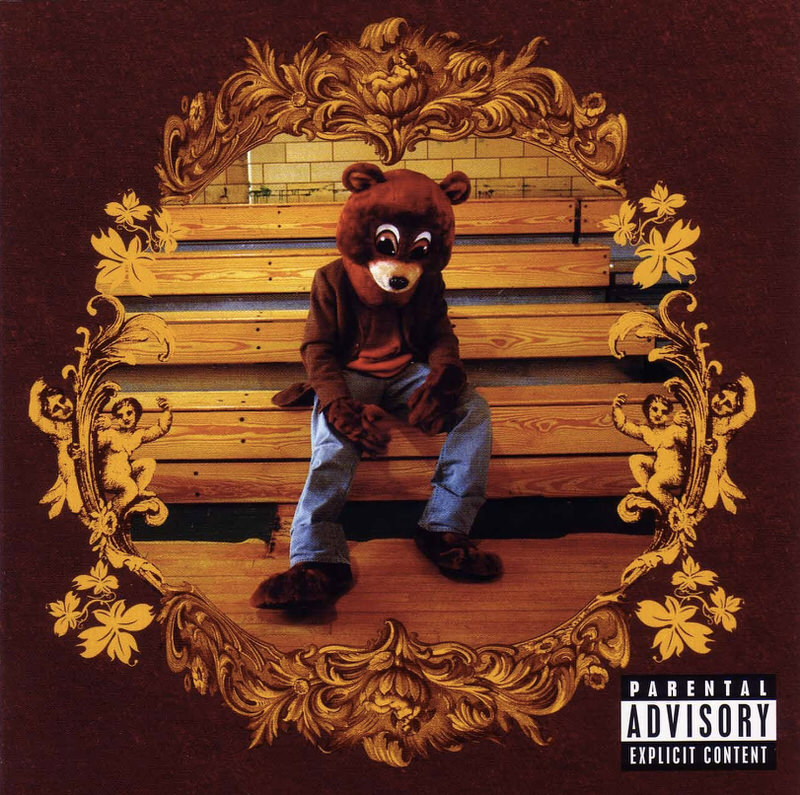