As they say, one man’s trash is another man’s treasure, and for Linus Nutland, that couldn’t be more true. Nike Server turns a wasteful into a gold mine as Linus repurposes old sneakers that are destined for the landfill.

Linus started Nike Server back in March of 2019. It began as a simple sneaker reselling platform with a niche focus on vintage Nikes. Between Linus’ love for sneakers and his ever-growing collection, Nike Server seemed like the inevitable solution for him to take his sneaker collecting to the next level, but more than just that, Linus was a first-year university student and school was putting a strain on his finances.

“I was in my first year of university and I needed money,” said Linus. “Pretty much all of my collection of Nikes at the time, I had bought for like under £50. I was searching on eBay for just my size and then I realized if I started searching for every size, I could start making money off this.”

From the depths of eBay to charity shops, car boots, and more, Linus started curating an endless supply of vintage Nikes. But more than just sales, Nike Server provides a deep dive into sneaker history. Linus spends hours researching different pairs in order to provide context and education on each sneaker. Even if you don’t find yourself in the market for vintage Nikes, there’s a lot to be learned from the Nike Server archive.

“When I first started out, I didn’t want it to just be a shop,” said Linus. “I wanted it to actually be some kind of educational platform. Some of [the history] is just stuff I know from following pages and following designers, but a lot of it is about research. Obviously I’ve been doing this for so long now that quite a lot of the knowledge is sticking in my head, but sometimes when I’ve got a pair of shoes I’ve never even seen before, I try to search as much as I can. Then I then bring that research onto Instagram so that everyone else can know.”

After getting Nike Server off the ground, Linus found himself in a tricky situation. A lot of the sneakers he was selling had little-to-no wear left being that his stock consisted of strictly vintage. This is fine for a collector, but for buyers looking to wear the shoes, this was a major problem. Linus ended up dealing with upset customers and a surplus of stock that wasn’t selling.

“I was stuck with either listing shoes as unwearable, and then no one was buying them, or trying to be cheeky, and not listing them as unwearable, but then people would message me that their shoes are falling apart, and I would have to refund them. So it got to a point where if shoes arrived, and I thought they were unwearable, I wouldn’t sell them. But I didn’t want to throw them away, so over a month I ended up with like 20 pairs of unwearable shoes.”

This is when Linus was forced to get creative and start seeking out other options. As a sportswear design student, Linus decided to repair the sneakers himself, but he quickly realized that he was a little too in over his head.

“I tried to start doing the restorations myself. All the re-soling and re-gluing; it just didn’t work. It took too long and you need expensive equipment to do it correctly. I didn’t have the money for that. I had 20 unwearable shoes and if I wanted to re-sole them, then I needed to buy 20 more shoes – that was what sparked me to look for another alternative way of doing things.”

Eventually Linus ended up discovering Vibram, a somewhat eccentric but extremely technical footwear company that has a long-standing innovative history. Although Vibram has roots in Italy, the company has a series of different cobbler shops located in major cities.

“Vibram has a cobbler’s shop in London, so I took the 20 pairs to them and they re-soled them all for me. After that, I coordinated all of the product photography and ended up doing an editorial shoot with my friends as models. It ended up looking really good and Vibram basically saw that, and reached out to me, and it became an official collaboration.”

Known as the Zero-Waste Approach, this collaborative project between Linus and Vibram is the first of its kind. Linus continues his usual method for Nike Server and sets aside all the unwearable sneakers. From there, he sends the shoes off to the Vibram cobbler shop for the soles to be replaced. Vibram saves all the old soles for Linus, which he then takes to NikeTown London’s “Reuse A Shoe” drop-off point. Nike then recycles the old soles and repurposes the material to create their Nike Grind rubber, which is typically seen on Nike’s “Move-to-Zero” sneakers.

The best part about this process is that anyone can do it, as Vibram has launched their “Repair If You Care” initiative. To get started, visit the Vibram website and use their shoe repair locator, which lists all Vibram-approved cobblers in your area. From there, you can either head directly to the shoe repair shop or schedule a virtual consultation with Vibram. The virtual consultation will guide you through your options and make instructions for your local cobbler.

This process is not only able to save your sneakers, but completely transform them. Linus’ ability to pair technical Vibram soles with improbable uppers, makes for a sneaker that is absolutely unconventional and one-of-a-kind. With 300 million pairs of sneakers ending up in the landfill each year, Linus hopes that more people will consider upcycling their sneakers before tossing them in the trash. Sustainability has always been important to Linus. Nike Server is just one of the many ways he’s tried to eliminate waste within the fashion industry.

“Before I started Nike Server and before I was doing all of the stuff with Vibram, all of my university sportswear design stuff has all been sustainable. I had been focusing on completely biodegradable clothes and natural performance fabrics. It’s also something that I’ve inherited as well, as both of my parents are [eco-conscious.] My dad especially, as he has worked in the sustainability sector since I was born.”

In the past, sustainability initiatives have gotten a bad wrap. A lot of people are too stuck in their ways or simply don’t see the value in sustainable design, but unfortunately, the fashion industry is one of the largest carbon emitters in the world. If we hope to see a cleaner and long-standing Earth, we desperately need to reconsider our shopping habits.

“In terms of footwear, just look at the basic facts like how much carbon emissions come from making one pair of trainers,” said Linus. “It’s around 16 kilograms on average for a pair of sports shoes. Then you take into account how many pairs of shoes are made each year – it’s something ridiculous like 25 billion pairs. And then you look at how many pairs of shoes are thrown away every year — it just doesn’t make sense. There’s so much stuff already here to buy. If you wanted a pair of shoes, you could go on eBay or Depop and find that same pair of shoes slightly used, and even cheaper. It makes more sense to buy secondhand. That’s why I started Nike Server. It’s crazy how much damage the footwear industry does, and if you’re buying new sneakers, you are supporting that damage essentially.”

Sustainability doesn’t have to be boring and Linus’ partnership with Vibram is proof. For their latest initiative, the duo has launched the Vibram Academy Tour, which is led by none other than Linus. These academy tour stops serve as pop-up workshops where people can take in a pair of their old sneakers and re-sole them on the spot. This shows people a behind-the-scenes look at the process and the quality of the work. But more importantly, it encourages creativity and allows for people to take sustainability into their own hands.

As Linus works to finish school, he hopes that he can secure a job at a leading sportswear company like Nike, where he can continue to implement sustainable design practices. Recently Linus finished up a production internship at Raeburn, an ethical design company that also focuses on sustainability. As of what’s next for Linus in the near future, a third installment of the custom Nike Server x Vibram sneakers is on the way soon. Be sure to follow @LinusNutland and @NikeServer on Instagram, so you can secure yourself an exclusive pair of his Zero-Waste Approach sneakers. 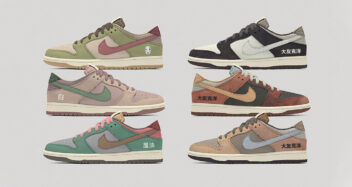 Creator Connection: Between the Lines with Stan Birch 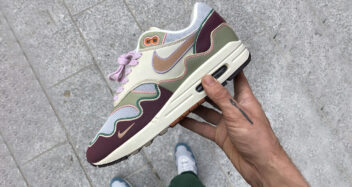 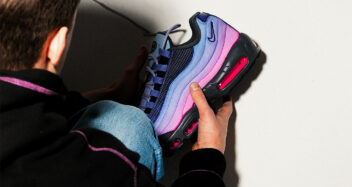 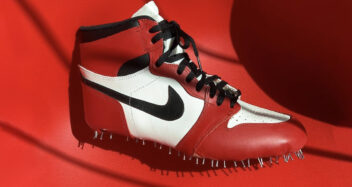