As the championship game goes down tonight, plenty of basketball enthusiasts are excited to see who takes home the title. With the hoops action, comes the latest and greatest in footwear as we are certain that some of the finest collegiate stars will sport various Nike LeBron makeups, which segues to our latest College Kicks On Court Classic.

Featuring the likes of Ben Simmons, Rajon Rondo and Devin Booker, this latest feature covers the last 13 years of college basketball by focusing on all of the Nike LeBrons and the impact of his silhouettes.

To see more, scroll through the page below to enjoy.

When LeBron James made the venture to the NBA, plenty of basketball enthusiasts were enamored with the opportunity this once-in-a-generation type of player presented. Inking a lucrative Nike contract right out of High School, LeBron’s signature debut would be the Nike Air Zoom Generation.

Featuring a ton of LBJ specific features, the Zoom Generation would become a staple of college hoops seen on the likes of Jameer Nelson, Pat Christopher, Jamaal Franklin and Daniel Ewing.

The Nike Zoom LeBron II would be the first LeBron James signature model to take on the legendary forward’s name and it would be the shoe in which he would rock during the 2005 All-Star game in Denver.

The first ASG colorway of the Zoom LeBron II would feature grey and royal blue accents whiles laser-etched details are featured; the same model donned by Corey Brewer, as seen above.

In 2005-2006, Nike released the third installment of the LeBron series with the Nike Zoom LeBron III. LeBron himself would turn-in plenty of stellar games in the model, but its presence would be spotted within the realm of college basketball as several Big East stars rocked the silhouette.

The boot-like construction of the Nike Zoom LeBron IV made this silhouette arguably the heaviest model within the lineage. However, that didn’t stop former No. 1 overall pick Greg Oden from dominating the collegiate ranks and helping the Ohio State Buckeyes reach the 2007 National Championship Game. Although the Buckeyes would fall short, his pairing with Michael Conley in the “Ohio State” PE of the LeBron IV was rather impressive.

Jordan Hill has become a solid rotational player for a variety of teams such as the Los Angeles Lakers and Houston Rockets. During his time at Arizona, Hill would rock a plethora of notable shoes such as the Nike Zoom LeBron V White/Midnight Navy that he wore against West Virginia in the 2008 NCAA Tournament.

Ohio State also had a PE but relegated themselves to rocking the Solider model of the Nike LeBron series. 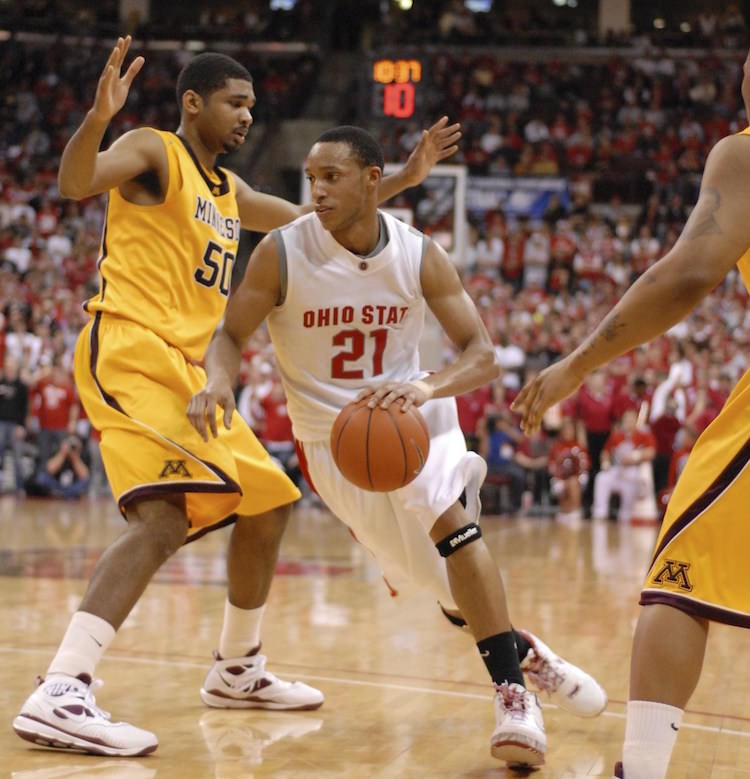 Evan Turner would have a solid career at the Ohio State as his tenure would lead to the No. 2 overall pick in the 2010 NBA Draft. Rocking the “Ohio State” PE of the Nike Zoom LeBron 6, Turner would also outfit himself in Soldier makeups of the Nike LeBron series.

Furthermore, the Kentucky Wildcats had their very own UK PE during the 2009-2010, that would be donned by John Wall and company.

Whenever there is a “sneaker list,” Derrick Williams is always within the discussion as the current Knick forward has showcased an array of quality kicks for many years now. During his time at Arizona, Williams would take on conference foe the UCLA Bruins in the “Cool Grey” Nike LeBron 8 V2.

For those that may remember, the Nike LeBron 8 was the first model that LeBron James would wear as a member of the Miami Heat.

LeBron James has been known to be very gracious to his de facto university in the Ohio State that surely would’ve received the services of LeBron James had he chose to choose the path of “higher education.” With that in mind, an abundance of LBJ silhouettes have garnered Ohio State treatment such as the LeBron 9.

This would be the signature model that would help LeBron grasp his first NBA title.

Within the pantheon of AAU Basketball, the traditional aesthetic is to sport a “team shoe” that shows unwavering solidarity. Well last season’s Duke Blue Devils squad had a sort of “team shoe” of the their own as plenty of player such as Quinn Cook and Jahlil Okafor rocked the Nike LeBron X.

Both players would enlist the help of custom artists to create their 1-of-1 pieces, in which they would help secure Duke a national title.

The Nike LeBron 11 would help bolster the growing trend of 1-of-1 iD models canvassing the hardwoods of collegiate competition. With the larger schools having access to the litany of PEs available, we’ve witnessed several UNLV Runnin’ Rebels rock both Elite and iD variations of the Nike LeBron 11, such as Christian Wood.

As usual, Ohio State Buckeyes would garner their own PE of the aforementioned makeup.

The Nike LeBron 12 may easily have been the most transcendent Nike LeBron signature model as the abundance of collegiate players in the silhouettes is vast. So vast in fact that nearly two years removed from its initial release and players such as Markus Kennedy of the SMU Mustangs continues to don the “What The” colorway during in-game action.

Also, lottery picks D’Angelo Russell and Devin Booker were seen on occasion in the LeBron 12.

The Nike LeBron 13 is easily the most innovative and performance facing silhouettes of the LeBron lineage. While a one pieced upper that connects the body and tongue, Flywire technology combs the underlay.

Recent signee of Klutch Sports, a LeBron James endorsed agency, Ben Simmons spent the entire season in the LeBron 13 within an array of LSU colors.