“Michael Jordan had to convince them (Nike) that the 11s would be great. He told them that one day an entertainer is going to wear those kicks with a tuxedo, or something like that, because of the patent leather toe.” – Shawn Stockman of Boyz II Men

Boyz II Men put the Air Jordan 11 on; Michael Jordan made them hot.

You don’t have to give the most successful R&B group of all time any credit for the Air Jordan 11 being the most fashionable Jordan ever. Heck, there’s no images on the web of them wearing Jordans on the Grammy’s big stage and most importantly, Tinker Hatfield and Michael Jordan should be the first two people mentioned when discussing anything about the Air Jordan 11. However, the style icons of Boyz II Men created a special moment with the Air Jordan 11 that Michael Jordan himself remembers vividly, whether you and I have evidence or not.

In our latest interview, Boyz II Men’s Shawn Stockman speaks on behalf of the group about how the group decided on wearing Concords at the Grammy’s, Michael Jordan’s reaction, the group’s stamp on today’s style, and their influences growing up in Philly.

Shawn Stockman of ?Boyz II Men on the red carpet in “Concord” 11s

Nice Kicks: Obviously, you guys are known for the incredible hits you consistently came out with during the 90s, but the sneaker world credits you for one of the most iconic moments of the Air Jordan 11. What do you remember most about wearing Concords on the Grammy stage?

Shawn Stockman of Boyz II Men: I can tell you the exact story MJ told us. Around 95-96, Jordan came out with the Concord 11s, and when they first came out, Jordan told us that the people over at Nike were not big fans of the 11, initially. Jordan had to convince them that the 11s would be great. He told them that one day an entertainer is going to wear those kicks with a tuxedo or something like that because of the patent leather toe. It makes sense because patent leather shoes are often worn with tuxedos. Lo and behold, the day of the Grammy’s, the guys and I came out in White Sox baseball caps, tuxedos and Jordan 11s. MJ saw it and was like, ‘Yo, this is crazy!’ He was a big fan of the group even before that, so when we finally met up with each other, he told us this story that I’m telling you now and how Nike really didn’t like the 11 when it was initially produced. From that meeting, we became really good friends. Since then, we’ve been getting Jordans on the regular because of that. I pretty much have every single Jordan that has come out since that meeting.

Nice Kicks: So, whose idea was it to wear Jordans with tuxedos on the big stage?

Shawn Stockman of Boyz II Men: It was basically all of us. When we first saw them, all of us instantly fell in love with them. We were like, ‘These are the sh*t.’ We knew they would look crazy with tuxes. As far as how we decided, it was just a conversation amongst us as friends. We knew they were dope, we were going to the Grammy’s, and we wanted to look good and different. We were never the type of group, at least at that time, to wear just regular, old tuxes with shoes. So, we wanted to freak the tuxes a little bit with the Concords.

Nice Kicks: Nowadays, you see a lot of people ‘dressing up’ Jordans at weddings, award shows and/or other formal events. Do you see you guys wearing Jordans as the beginnings of formal wear with sneakers?

Shawn Stockman of Boyz II Men: You see that everywhere these days. I’m not saying we were the originators; I wouldn’t be that pompous. We were just one of the first groups to do it in this generation. We brought our own certain type of fresh to it. Even though somebody may have done it before us or even after us, we came out with that original vibe and original style. We brought more of that style into the limelight because we were so popular and everybody checked for what we wore.

Nice Kicks: I assume the Air Jordan 11 is the group’s favorite Jordan model.

Shawn Stockman of Boyz II Men: Yes, those are our favorite ones. I think they’re the freshest, and I have all of the 11s – the black patent leathers, the white patent leathers, the black and red ones. But there’s a few brands that I really like to wear, and I like to wear stuff that goes with almost any outfit. The 11s are my favorite because I can wear those with anything; any shirt and any pair of jeans. 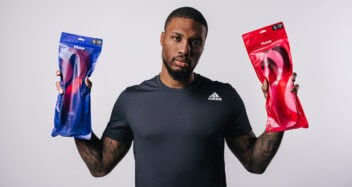