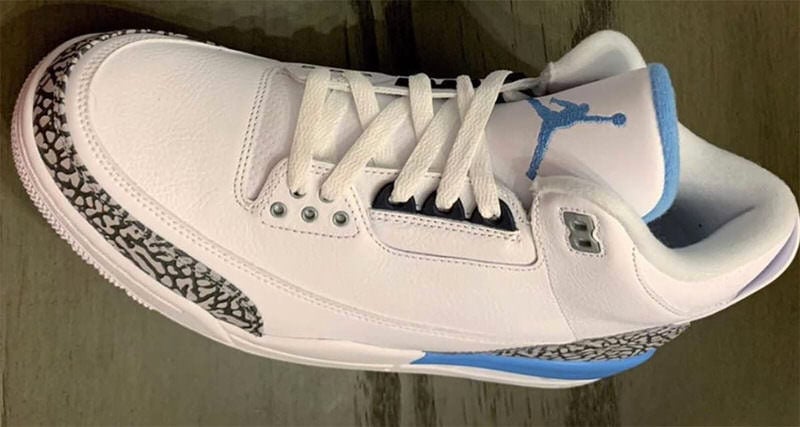 Playing football at the University of North Carolina sure has its perks as back in January 2018 we saw for the first time the Air Jordan 3 UNC PE.

Unveiled to the tune of Big Sean & Metro Boomin’s “Pull Up ‘n Wreck,” a video from @UNCEquipment showcased a shoe that would have Julius Peppers and Dre Bly lobbying for an extra year of eligibility.

Essentially taking the White/Cement 3 base and adding university blue in place of black or red, the school logo stamps the tongue with Jumpman Air gracing the heel on these Heels exclusives.

In case you missed it, the Michigan football team got their own Air Jordan 3, too.

Another view of the Air Jordan 3’s the team and staff received yesterday. #WEAREJORDAN ?: @taylorvippolis

While this Carolina colorway was originally an exclusive for the school’s football roster, they are reported to be releasing to all in altered form.

Recent information suggests a powder blue pair of 3s could come in Spring 2020.

While U of M exclusives have inspired GR releases in recent years, this could be the next evolution of a beautiful trend. Perhaps Florida 4s next?

Well, now not only do we have a release date but a shot of the GR sample.

Just in time for March Madness, the Air Jordan 3 UNC is reported to release on March 7th of 2020. Tongue branding and eyelet detailing prove the only noticeable differences on this team take turned general release.