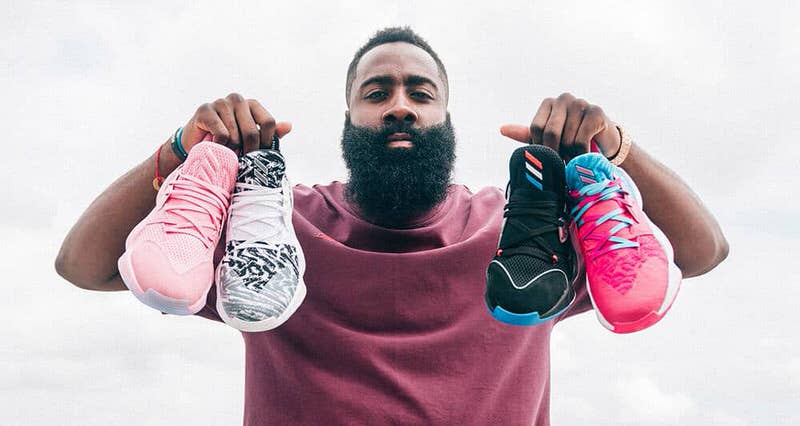 Since the beginning of the two-time MVP’s signature line with adidas started, adidas Boost was the feature cushioning tech for the flagship model for James Harden, but for his fourth model, the brand has shifted away from Boost in exchange for Lightstrike – the new super-light midsole that provides the perfect balance of lightweight cushioning and on-court responsiveness.

adidas Lightstike was created exclusively by the adidas Basketball team and introduced last year in the very limited run of the N3XT L3V3L.

Tapping on the roster of creators that Adidas has in their arsenal, the adidas Harden Vol. 4 will see an early introduction with a collaboration with LA-based streetwear designer Daniel Patrick that Harden is said to wear on court on November 1st.

“The process to create the Vol. 4 was a true collaboration with the adidas design team that allowed me to voice my creativity and to blend different ideas into one shoe that would showcase both my style of play on the court and my sense of style walking out of the tunnel,” said Harden when talking about his fourth signature shoe with adidas.

Daniel Patrick continued with his insight into the project, “The look of a basketball shoe is just as important as the performance in today’s game, so we made sure to push the boundaries in both. We all worked closely together to make sure the swagger and style that James carries were brought to life with this Harden Vol . 4 colorway and through the larger adidas Basketball collection to come.”

Harden Vol. 4 will be available starting October 12th with the “Barbershop” colorway, followed by “Pink Lemonade” available on October 26th, “Candy Paint” on October 31th, and “Cookies & Cream” on November 15th.  All will be priced at $130 and available directly from adidas and their retail partners.