The success of the first Acronym x Nike Air Presto Mid Pack brought both Acronym and the Nike Air Presto back on the map again. The pairing originally released back in 2016 and made a huge success in both high fashion and streetwear fashion markets.

According to py_rates on Twitter, nearly two years later, the functional fashion brand will be teaming up again for Fall 2018 to release three brand new colorways of the Acronym x Nike Air Presto Mids. 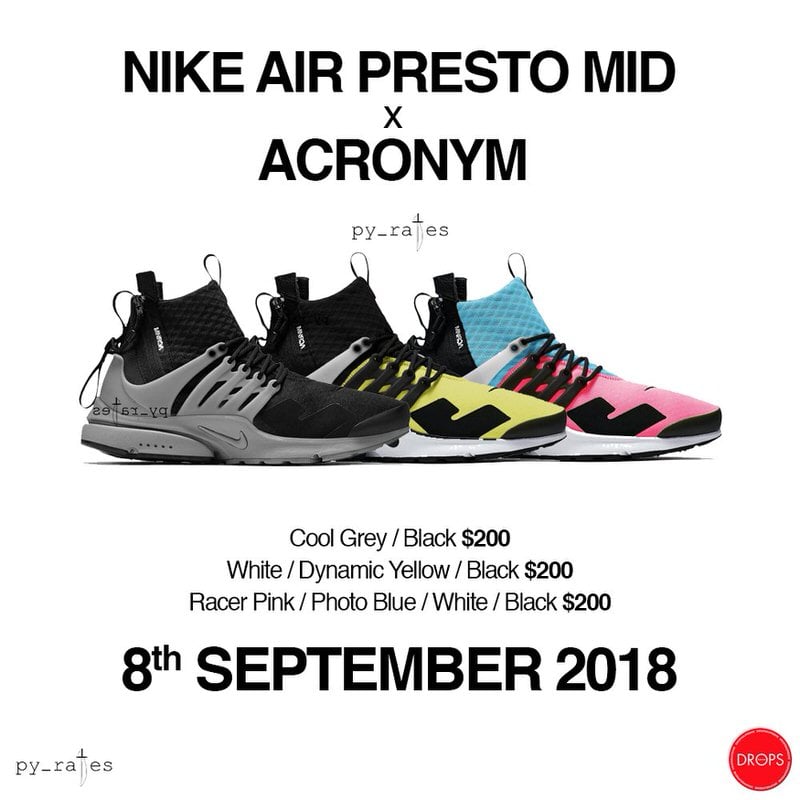 According to py_rates, the new Acronym x Nike Air Presto Mid Pack will release on September 8th with retail of $200 USD.

No official images have been confirmed yet, but check out the mock ups py_rates rendered.

Update 8/23: One of the three Acronym x Nike Air Presto Mid colorways have been revealed by @J23app. Take a first look at the Racer Pink/Photo Blue-White-Black edition expected on September 8 for $200 USD.

Update 8/24: The remaining two pairs of the collection have been revealed. Check out both the White/Dynamic Yellow-Black and Cool Grey/Black colorways. All are expected to drop On September 8.

Update: 8/30: Following the surprise SNKRS release of the Racer Pink/Photo Blue-White-Black colorway, Nike has officially confirmed the set will release on September 20. Errolson Hugh also shared a promo video of the collection in IG.