Last night, PJ Tucker brought out the OG Nike Shox BB4 in Red/Silver, originally made for Vince Carter to wear during the 2001 NBA All-Star Weekend.

Carried into the arena by the swaggy small forward for the Houston Rockets, the 18-year-old shoes made it to shootaround, but were not worn on court as they came apart before tip-off. 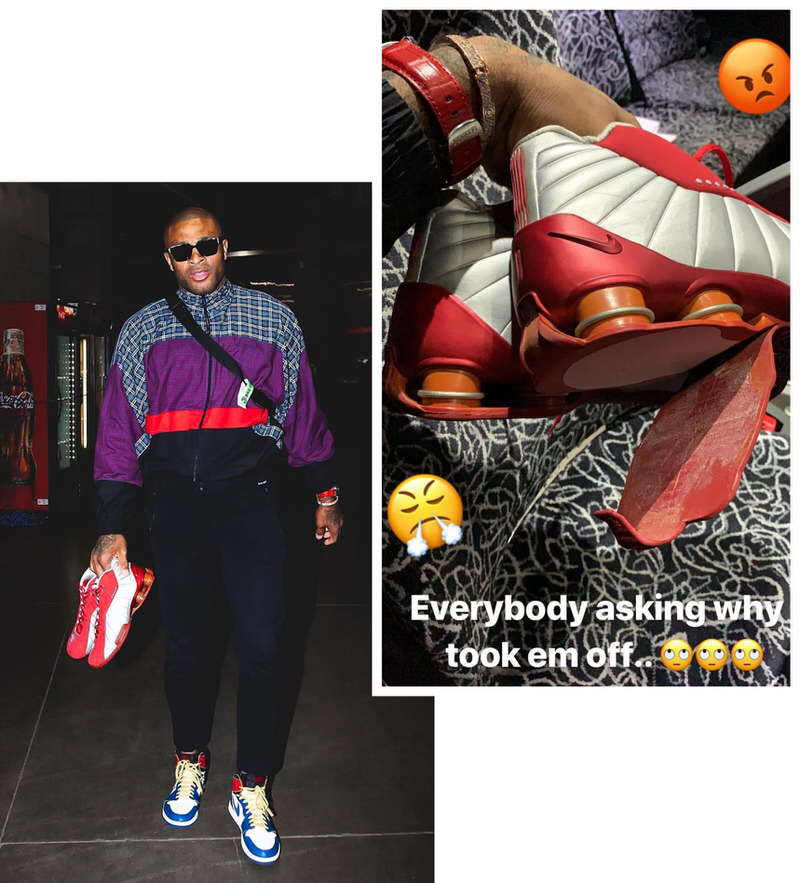 Funny enough, this was not the first time this Red/Silver pair of Shox didn’t make it to the hardwood.

Crafted for Vince Carter for NBA All-Star Weekend 2001, VC was voted an All-Star starter in 2001 and even played exceptionally in the game, scoring 16 points and dropping four dimes. However, the Red/Silver Shox never hit the hardwood.

In fact, Vince elected to wear a PE pair of the BB4 that was essentially the White/Red retail colorway, only with his number and initials stamped on the side.

Wearing a retail twin over a moment made PE in the game had to be good-news-bad-news for Nike. At that time, the BB4 was the hottest hoops shoe on the market and VC was the man in the NBA.

After saving the Slam Dunk Contest in the year 2000 when Mike’s retirement in ’98 and the lockout in ’99 almost made a Y2K crash for the league as a whole, Vince Carter was on top of the world.

One would assume it was all but expected by Nike that their new Shox signee, who leaped over Frederick Weis in the Summer Olympics, would defend his crown in the Boing-baring Red/Silver Shoxs.

As we know, that did not happen.

Though Nike likely suspected such would, we can bet they never would’ve guessed that Vince Carter would still be playing into his 40s — and still dunking at that.

Making the most of the moment that is now, Nike awarded VC with retro PE pairs of his beloved BB4s in an array of colorways made to highlight his new team — the Atlanta Hawks — as well as pay tribute to his Toronto launching pad.

Still doing his thing in Atlanta, it’s anybody’s guess when VC will hang ’em up. In fact, when Vince Carter actually retires will more than likely be the decision of an NBA GM, rather than VC himself, as he’s effectively told Father Time, “Nah, B” for what feels like the last decade.

Planning on playing next season and hopefully playing the one after that, what if Nike were to retro the Nike Shox BB4 in the Red/Silver ASW colorway on the shoe’s 20th Anniversary?

Back in the day, only 500 pairs were produced and sold as a true quickstrike for All-Star festivities. While they clearly sold through, the shoe never had an on-court moment so to speak, as Vince didn’t wear them in the game nor participate in that year’s dunk contest. 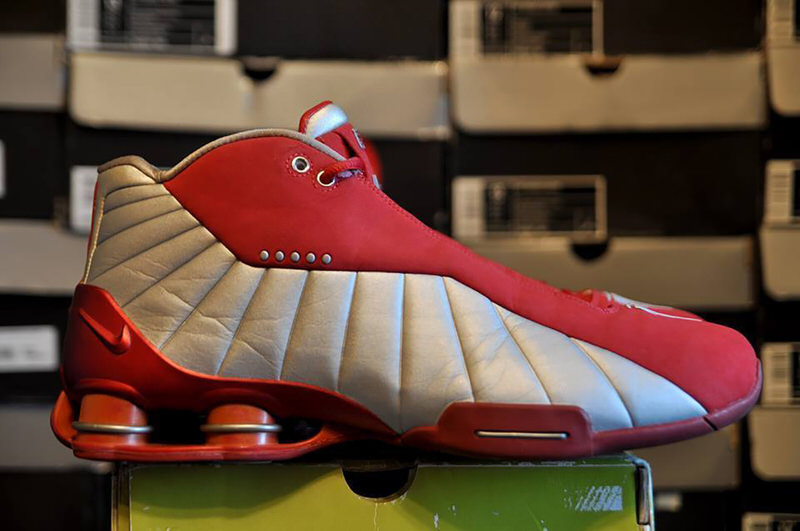 This past season, Adam Silver did an amazing job by placing Dirk Nowitzki and Dwyane Wade in the All-Star Game, as honorary members to celebrate their tremendous careers and announced retirements. What he also did was set perhaps an unfathomable precedent to do the same for similar stars in the future.

While Dirk is definitely the greatest international player to ever lace them up in the league and Flash is the most charismatic winner since Magic retired, there are many Hall of Fame-level players that could be considered for an honorary All-Star nod, but might not have the right timing on their victory lap.

Rather than have hurt feelings or unrealistic expectations for who is an honorary All-Star and who is not, why not spread the love and the fun by placing the game’s greats in the events they made memorable during their Hall of Fame careers?

But most fun of all, have Vince Carter in the Dunk Contest.

If VC can keep defying gravity by 2021, it’s only right Nike lace him up for a proper 50 in the shoe he never wore. 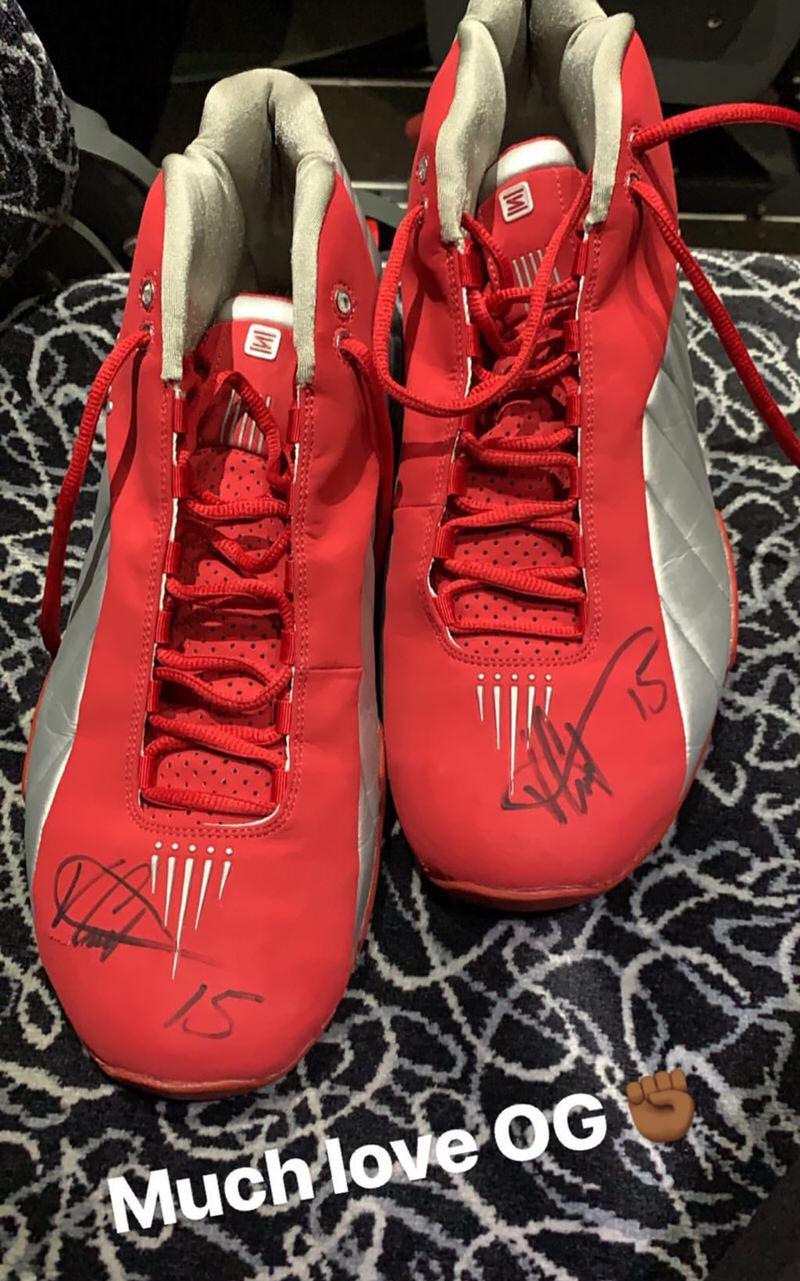