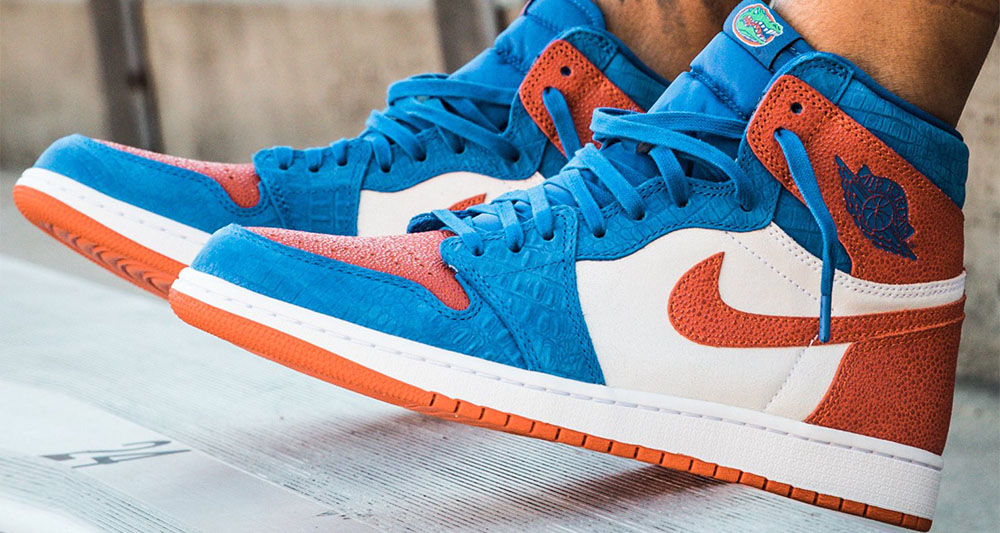 From the very beginning of outfitting collegiate teams, Jordan Brand has gone above and beyond for student-athletes at Jordan Brand sponsored programs. In the early 2000s, the likes of MJ’s alma mater UNC, University of Cincinnati, and Cal were the regular recipients of custom gear and player exclusives, but in recent times as Jordan Brand has done top-to-bottom deals with entire university athletics programs, the players have been treated to retro PEs that have details that go above and beyond most special project releases.

In 2017, it was officially announced that Jordan Brand would be outfitting SEC powerhouse University of Florida following other chess move grabs of top conference programs that included Michigan in the Big Ten and Oklahoma in the Big XII.

Shortly after the announcement, Jordan Brand unveiled a series of Air Jordan retros sporting the Blue and Orange of Gator Nation and the players received an eye-catching Florida Gators Air Jordan 4 PE in late 2018.

Just moments ago, we were given an exclusive first look at a new PE for the Florida Gators that has set the bar to new heights for collegiate retro Air Jordan PEs.

The Air Jordan 1 Florida Gators PE utilizes the color blocking similar to the Shattered Backboards and Bred Toes with a white suede mid-panel, pebble textured leather on the back, side Swoosh, and toe, then finished off with gator debossed royal blue leather around the toe and heel with a nice finishing touch of waxed blue laces.

The rumor around Gainsville is that only a handful of players from the 2019 University of Florida football squad who graduated have been gifted these special Air Jordan 1s.  Currently, a few pairs are available at the local sneaker and streetwear spot Margaux who is fielding orders via DM.

UPDATE: Following up to yesterday’s first look at the Florida Gators Air Jordan 1 PE, the college’s official equipment manager’s Twitter account posted some shots of how these beauties look on foot.