In a fresh pair Air Force One sneakers – Rakim

On the surface, the iconic Nike Air Force 1 needs no introduction. Simply put, it’s one of the most important silhouettes in footwear history. From its crisp look to the endless colorways – there’s an AF1 for everybody. Across the globe variants of the shoe can be found on the feet of AF1 fans both old and new. With numerous special editions, limited releases and collaborations the AF1 truly is something special.

Bruce Kilgore’s timeless design debuted (1982) during the infancy of hip-hop, so interestingly enough, the two have grown-up together. Like hip-hop, the Air Force 1’s popularity started on the east coast.

Philadelphia’s Moses Malone famously wore the AF1 during his 1983 championship run with the 76ers and from that point forward the streets were on notice. If you remember, Nike retro’ed Malone’s championship season Air Force 1s last year.

Was Malone the only reason for the AF1’s rise? Of course not, but his gritty, unrelenting, on-court dominance was relatable to the hip-hop world. Malone made them noticeable, but hip-hop made them cool.

When it all falls down, Moses helped the showcase the AF1 but rappers gravitated towards the shoe because of their versatility on the streets. Essentially, there’s an AF1 to match any MC’s fit. One of the earliest, if not the first, recorded sightings of the Air Force 1 in hip-hop came via Rob Base and DJ E-Z Rock and their smash hit “It Takes Two.” 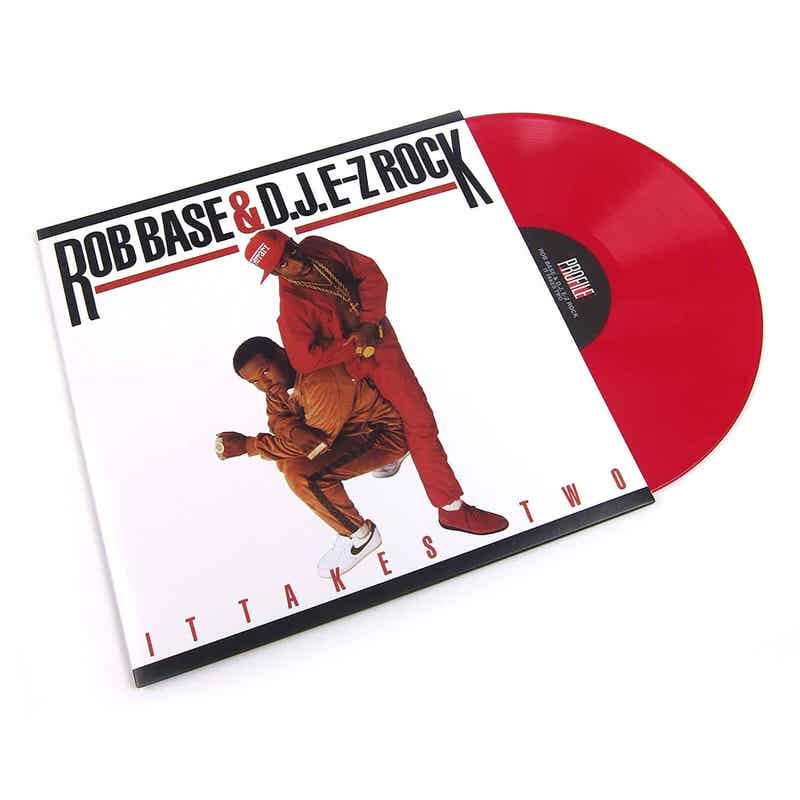 As they say, and the rest is history. Since “It Takes Two” the Nike Air Force 1 and hip-hop have gone together like peas and carrots. Countless rappers have rocked the Air Force 1 from Dr. Dre to Nas, Chance The Rapper to Lil Yachty and many, many more.

Jay-Z includes the AF1 in his verses, Nelly immortalized his love for the shoe with his notorious track of the same title and Fat Joe even licked a pair on MTV (S/O to Fat Joe for being the don of sneaker sole licking).

Throughout the decades Nike has blessed a grip of artists with their own special edition Air Force 1s and they’ve all gone on to be cult classics.

Recently, Travis Scott has carried on that tradition of collaboration between hip-hop and the AF1 with a string of wildly successful drops since 2017.

In commemoration of Trav’s latest AF1 release, let’s take a look back at some of our favorite hip-hop AF1 collabs from yesteryear! 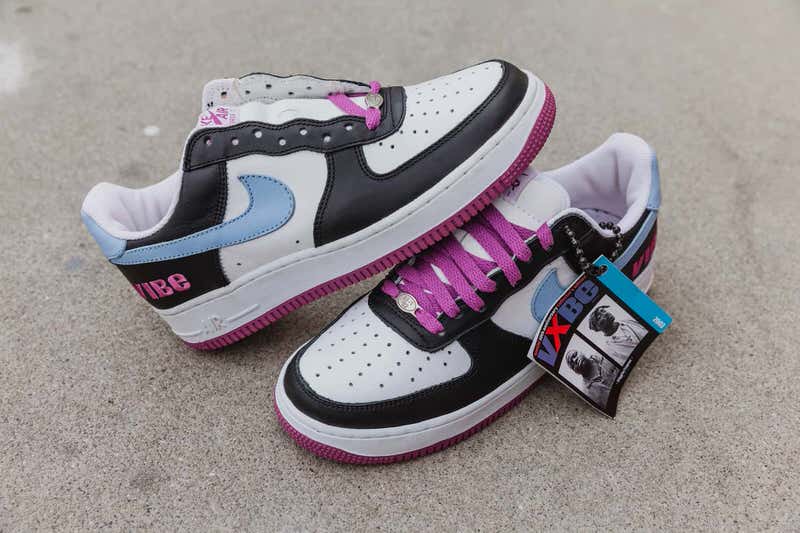 Here us out, Vibe is one of the definitive sources for hip-hop/rap news. It’s an OG publication that most rappers stive to work with.

Nike blessed the mag with these gorgeous AF1s for their 2003 award show and they’ve been a holy grail for committed AF1-heads ever since. 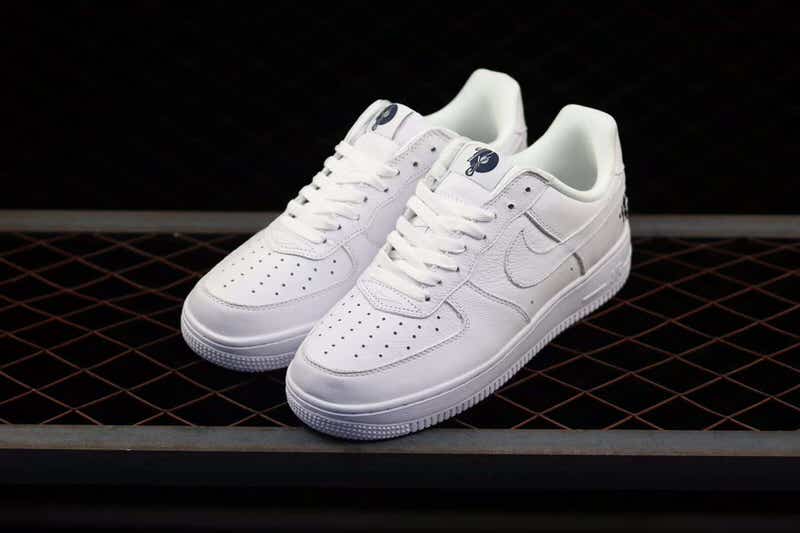 The Roc is in the building! Jigga got right to the point by simply applying the Rocafella Records logo on the tongue and heel to a pair of Uptowns.

Any real AF1-head as these in the closet as a cornerstone of their collection, thank goodness we got that retro in 2017! 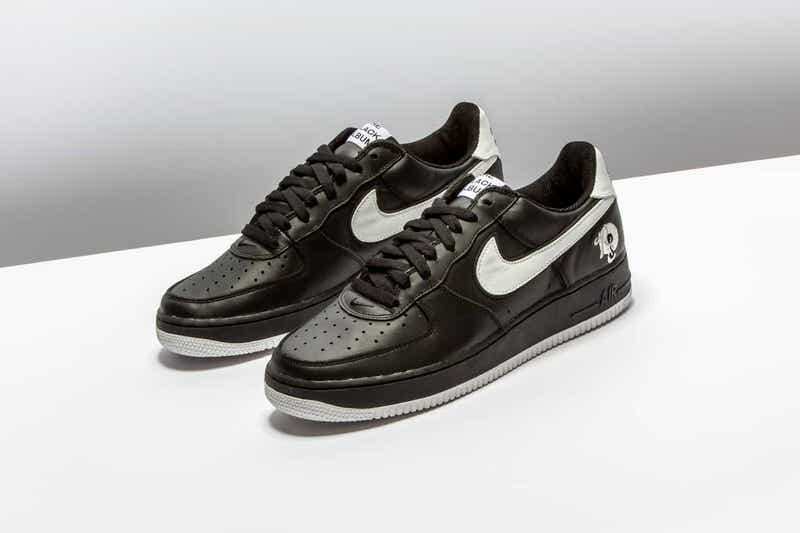 Jay said it himself, “I drop the Black Album, then I back out.” In conjunction with his “last” (lol) album, The Black Album, Jay-Z partnered with Nike for an extremely limited edition of the Air Force 1.

HOV flipped the color blocking of his first collab and added his album’s name to the tongue — again, straight to the point, ‘cus IT’S THE ROC! 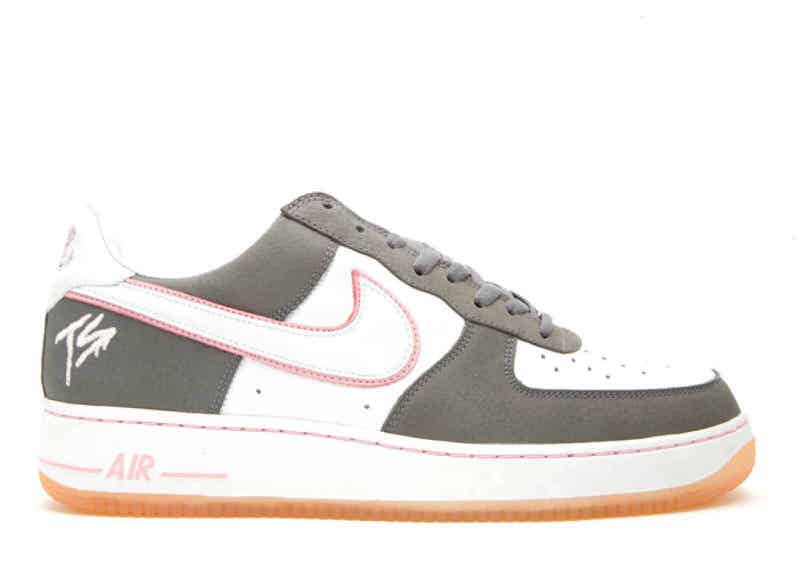 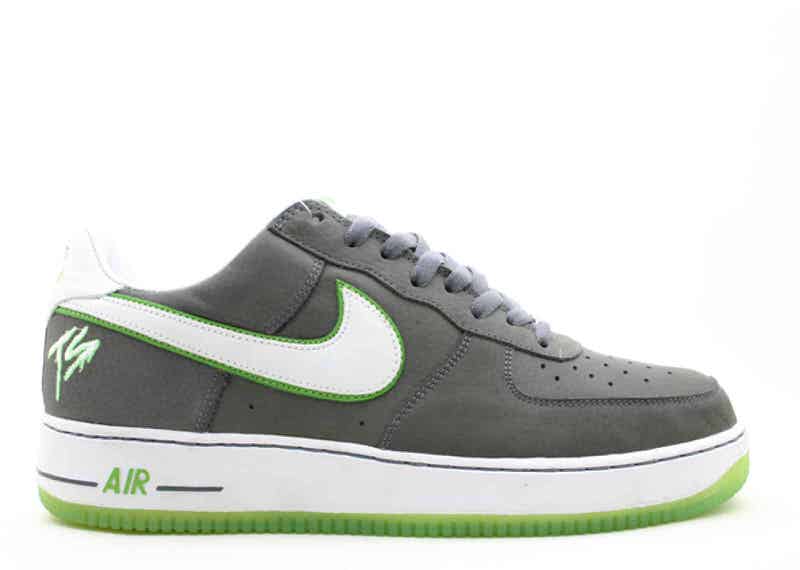 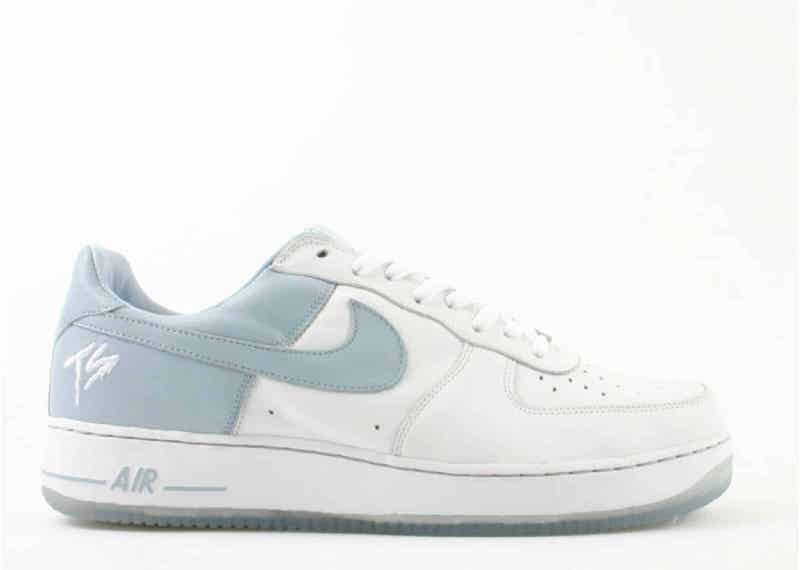 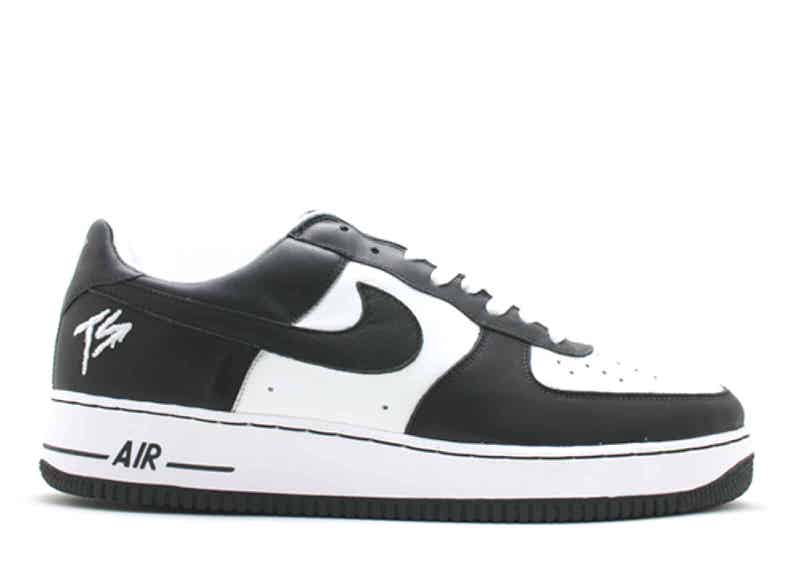 Bronx legend Fat Joe is a real Don of the sneaker world. Young cats didn’t grow up with MTV Cribs but anyone fortunate enough to have watched the show surely remembers Joe’s casa. Mid-episode the rapper enters his sneaker room and has a full-on moment with his Forces by licking the outsole! Fast forward a few years and licking the bottoms of deadstock shoes is still weird, but Fat Joe was the first to do it for ‘the culture.’ Look up the clip, it’s iconic.

“The Lick” ended up doing Fat Joe a big favor. A year after his Cribs bit aired, Nike worked with the MC on a series of Terror Squad (Joe’s music collective) Air Force 1s. Marked by the ‘TS’ on the heel, Fat Joe’s joints barely saw the light of day. Only the white/pink Swoosh’ed pair released via hyperstrike aka extremely limited and/or Friends & Family. 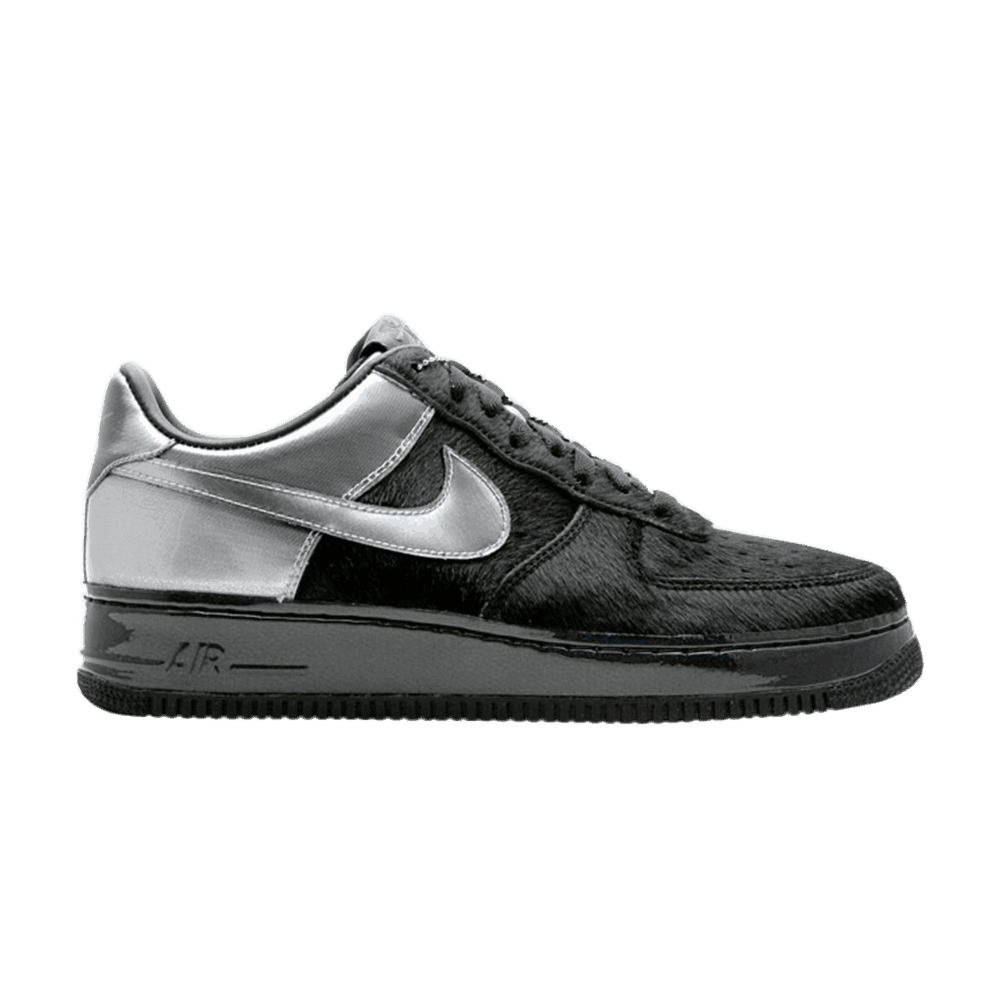 Black Friday doesn’t always have to be so ugly. Back in ’08, DJ Clark Kent dropped these black pony hair and silver kicks that sat on top of a translucent midsole.

“I went to the fabric library, picked the prime suspects and went to work on the design,” said God’s Favorite DJ. “The end result…Something black, luxurious & fly, and FRESH!!!! What better way to start the holiday shopping season?!?!???” 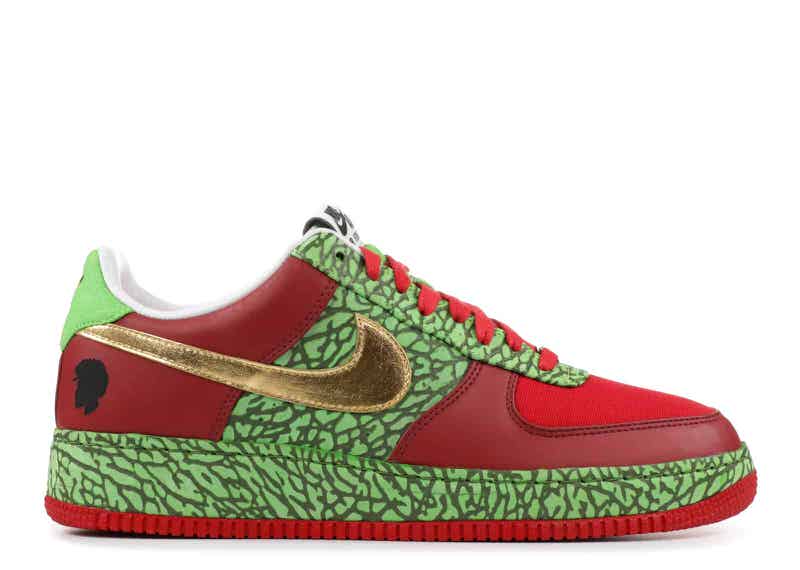 At the heart and soul of every song, there’s a beat and Questlove is a percussion OG. With a list of collabs to his name, Quest isn’t new to working with Nike. 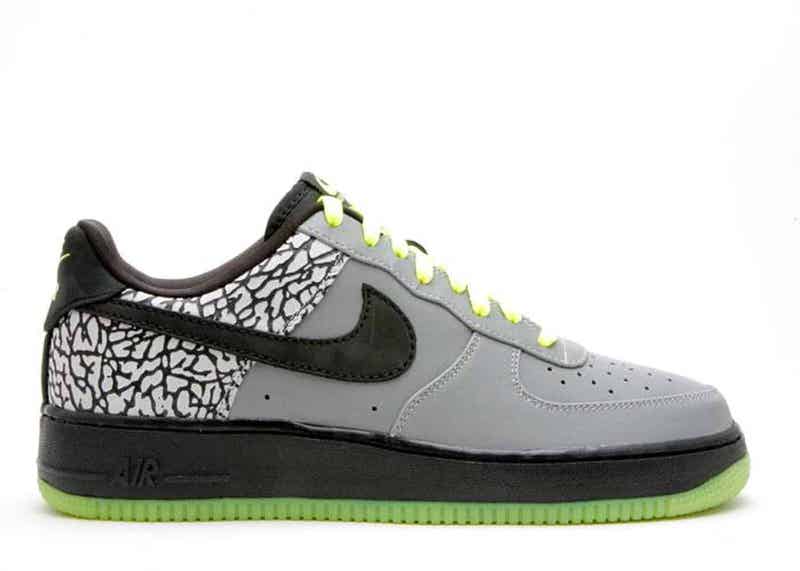 Released with accompanying Air Maxes and Dunks, these AF1 by DJ Clark Kent are still fire.

Volt/grey/black always looks exceptional, but Clark went the extra mile by adding elephant print, 3m uppers, and a glow-in-the-dark outsole. The ‘112’ name calls back to Kent’s NYC area code (if you didn’t know). 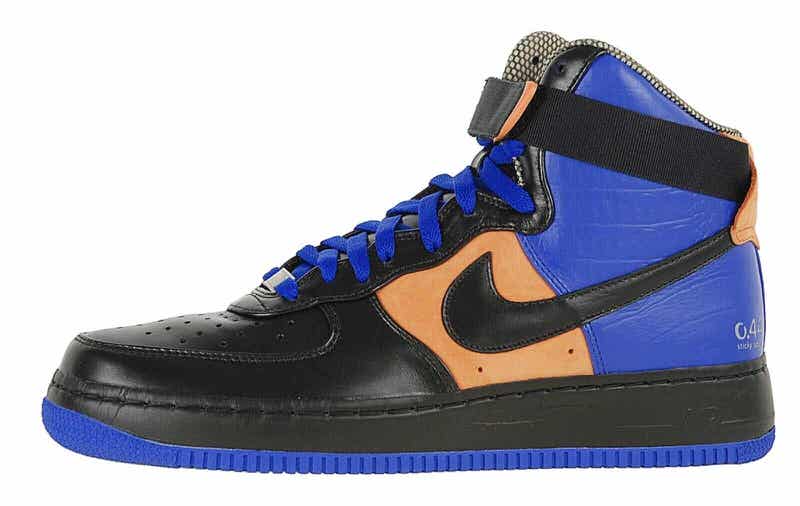 Clark when for the 3-peat with these Knicks inspired AF1s. Released in limited quantities as a part of the ‘East v. West’ pack, Clark couldn’t help but show love to his hometown with the clean black/orange/blue colorway.

If you were lucky enough to grab a pair while in NYC back in ’09 then your pair came with an NYC patch and special edition box.

We have to note that DJ Clark Kent has mad AF1s under the ‘Bespoke’ banner. Don’t think we forgot, there’s just so many and they’re not widely available! 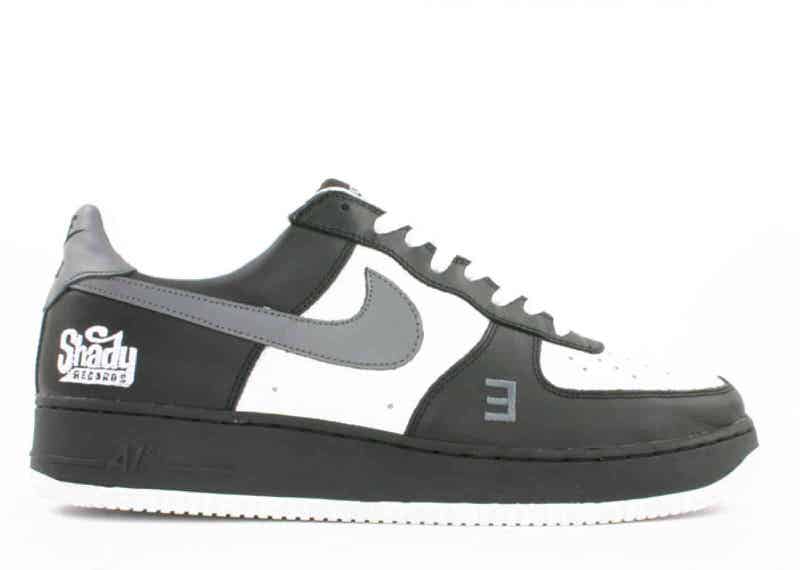 Eminem was the hottest MC in the late ’90s & early 2000s, period. Detroit’s finest ran the table with hit after hit punctuated with phenomenal lyrics. As a longtime Nike fanatic, Eminem quickly started cooking with the brand once his career took off. We’re all aware of his epic Air Jordan collabs, but Em also had a strong Air Force 1 game.

Dressed in a simple white/black/gray color scheme with Shady branding all over, these kicks were so simple yet soooo good. Unfortunately, this pair (and the next tw0) never saw a global release; but if AF1s keep poppin’ off then don’t be surprised if we get a retro down the road. 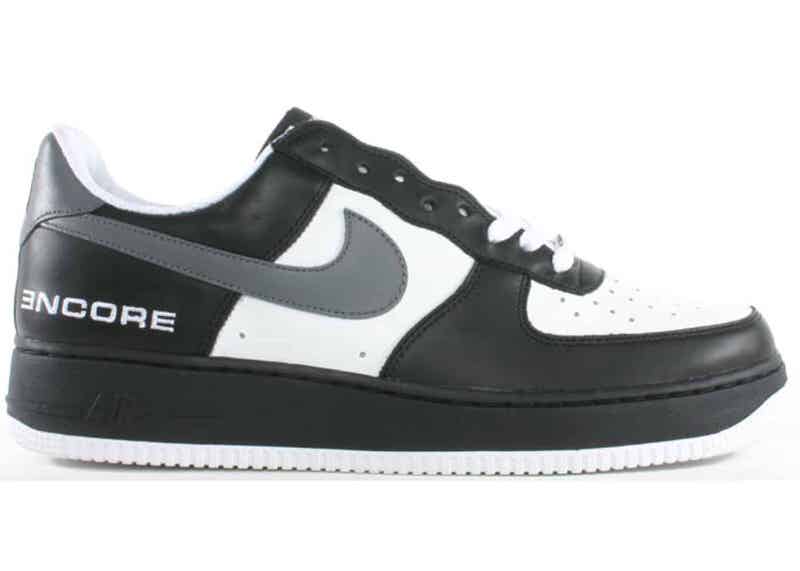 Slim Shady’s second AF1 launched alongside the ‘Shady Records’ pair above — but with minor changes.

The Shady Records branding was replaced with Eminem’s album name, Encore and the backward ‘E’ on the mudguard was removed. 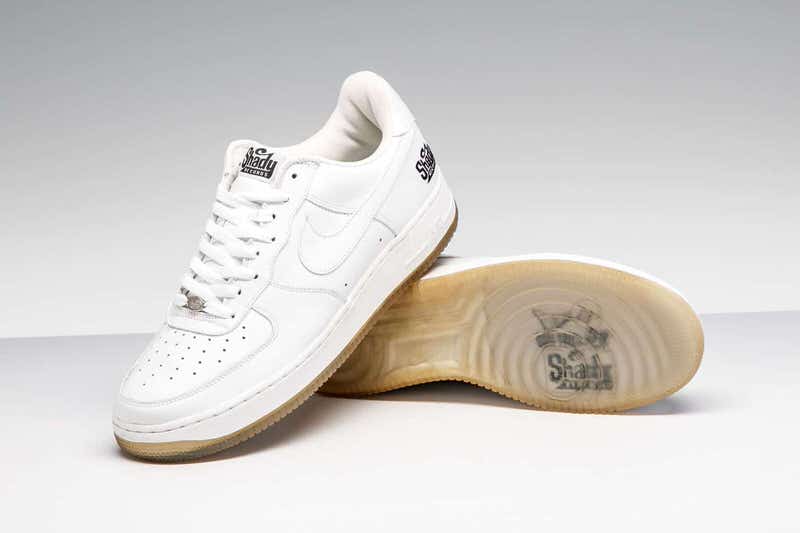 It’s not pictured, but this pair’s insole shouts out (former) Shady Records artists like 50 Cent and D12, too. 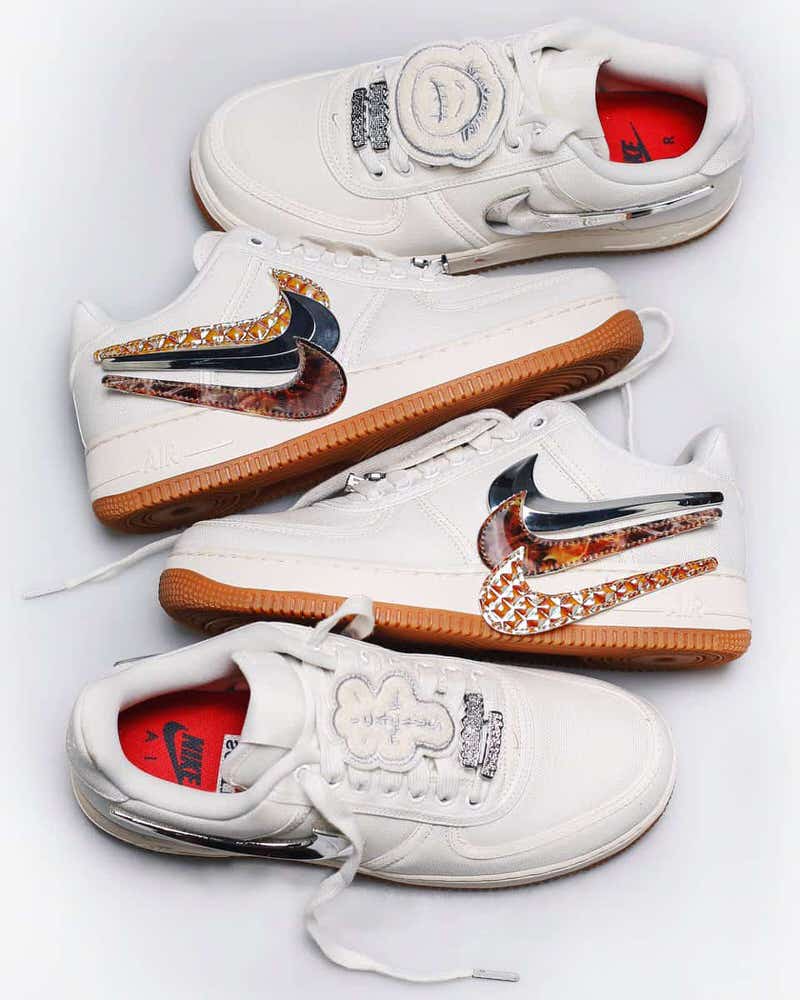 La Flame pulled out all the stops on his first AF1 collaboration:

Above all, Travis’ kicks looked great customized, allowing for further self-expression (something Trav is all about). 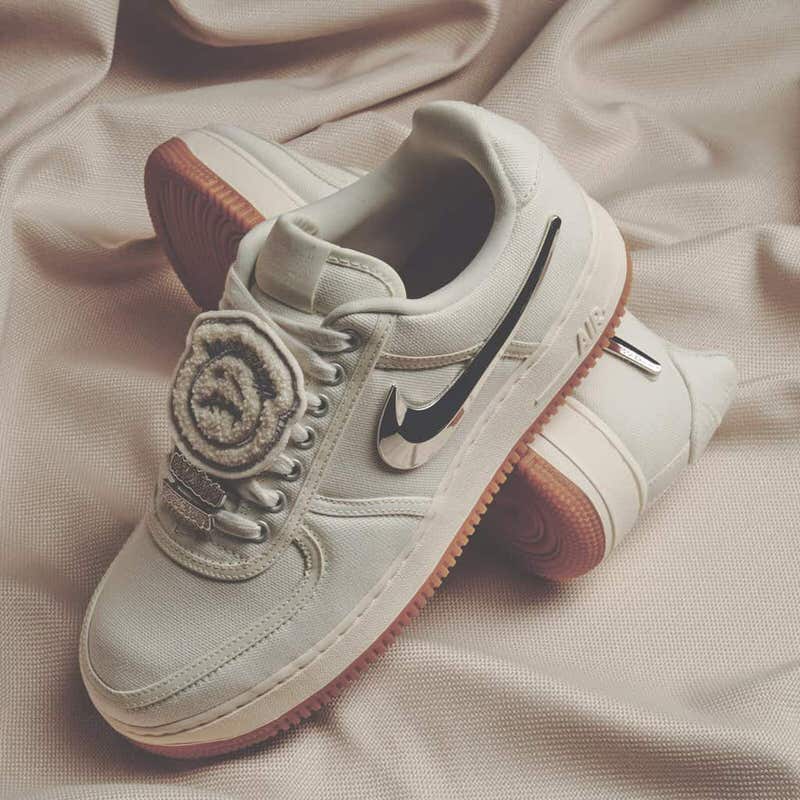 Run it back, but this time… in Sail. 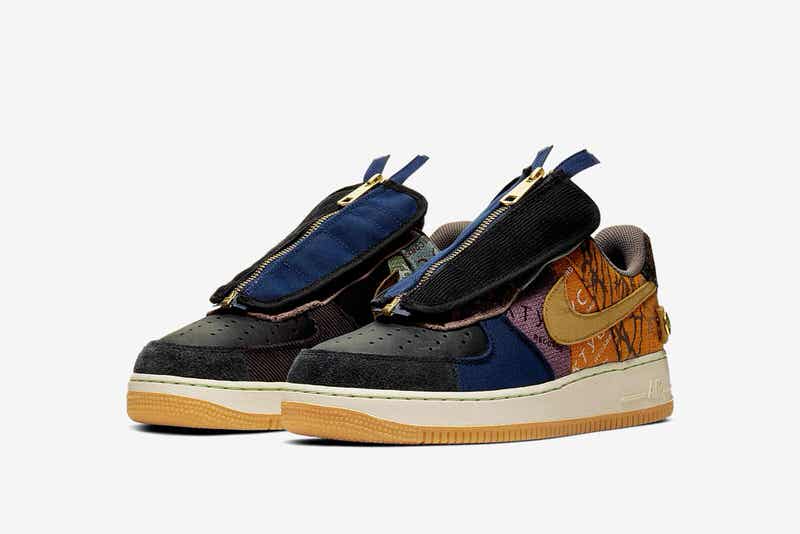 There’s brown canvas, wool, plaid, corduroy, leather and metal (on the heel) all working together to create a distinctly Travis look. If the zipped lace cover isn’t your thing then don’t worry, it’s fully removable! There’s no doubt that these will go down in history alongside past AF1 grails created by rappers.