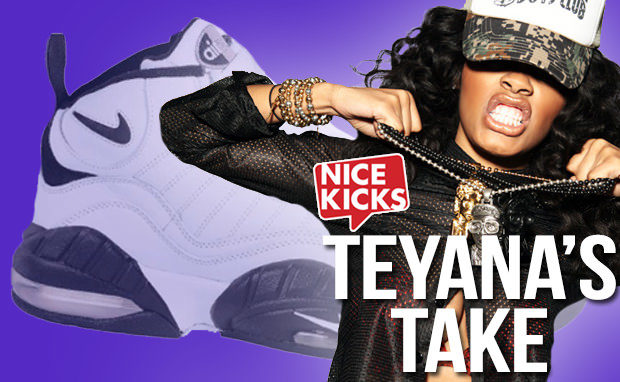 College basketball, namely the University of Michigan, received quite the boost when five highly touted freshmen decided to attend one school. At the time, it was unheard of to be able to stack such talent on one time in one swoop. The most celebrated of the quintet was Chris Webber. After two stellar seasons at Michigan, C-Webb took his talents to the NBA wear he continued to impress, and was featured in one of the best Nike commercials?to date. His Nike deal also gave us one of the most beloved signature sneakers in the Nike Air Max Sensation.?Take a look as Teyana Taylor explains her love for the shoe, and the?controversy?that came with it in this installment of Teyana’s Take.

Sneaker world! What’s poppin, it’s your girl, TT, with my take on some of my favorite kicks. First, I would like to take a quick second to say thank you for coming back and checking in with me. So shout out to you, you and you!

The Chris Webber Air Max Sensation was a dope sneaker that was surrounded in as much controversy as its namesake. The former ?Fab Five? star walked away from his deal with Nike because they refused to lower the asking price of $140 dollars. That price tag made them the most expensive sneaker on the market at the time. Webber feared that the majority of the inner city youth in America couldn’t afford them, and some would even resort to extreme measures to obtain them. These, simply stated, just look nice to me. I’ve always loved the Air Max cushioning on Nikes so these were a no brainier to me. Black is one of my favorite colors so the Swoosh on the front immediately caught my eye. I love rocking them with my Brooklyn Nets Cap.