Supreme‘s Week 8 Scarface collaboration couldn’t have come at a better time. Just recently, Supreme received a $1.1 billion valuation last week after reportedly selling 50 percent of its shares to the Carlyle Group for $500 million, and now it appears the world is theirs. The sell comes after nearly 25 years of cultivating the streetwear giant that we know them as today, so I don’t see this ending like the tragic tale of Tony Montana. Sticking to the script, the Scarface collaboration showcases the rise to power and fall from grace of the film all with a few images.

All of the tees are Bangers with ease. It’s really a matter of preference for your favorite scene in the movie that determines which tee is more of a hitter to you. Personally, I prefer the Blimp Tee. The soundtrack is my favorite part of the film and the scene depicted on the tee encompasses Tony’s mood with the swirling sounds of the film and movement of the blimp. Cinematics aside, this tee confirms what many speculated in Week 1, Supreme releasing a blimp was a calculated foreshadowing for this collaboration. The Blimp Tee is also the only tee in the collaboration to feature a logo on the front of the shirt. It’s safe to assume that the Scarface tees will come in the Scarface palette of red, black, white, and grey. Estimated retail is the regular collab tee price of $44 and will be printed on this season’s non-American Apparel %100 cotton pre-shrunk blanks. 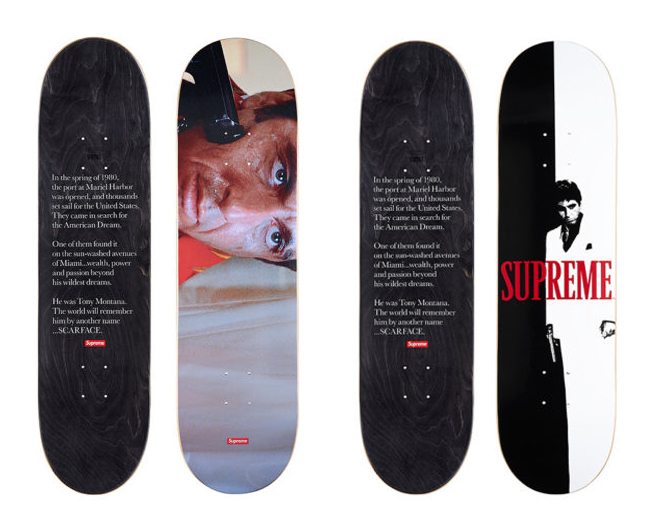 Despite the wall street acquisition, Supreme is still a skate brand at heart and these Scarface Skateboards are sicker than a 12 stair tire flip (as you can tell I don’t skate… roast me). The boards feature the shower scene where Tony watches his partner get amputated with a chainsaw while at gunpoint and the classic movie poster on the other but replaces the “Scarface” text with “Supreme” in the same font. The boards feature the same tagline from the movie poster…

“In the spring of 1980 the port at Mariel Harbor was opened, and thousands set sail for the United States. They came in search of the American Dream. One of them found it on the sun-washed avenues of Miami… wealth, power, and passion beyond his wildest dreams. He was Tony Montana but the world will remember him by another name… Scarface.”

On the grip tape, this tagline is also featured on the collection’s tees and Scarface Friend Hooded Sweatshirt. My only qualm with the board is that you will need to purchase two in order to showcase the image on the deck and the text on the grip tape. Estimated retail is $66 so two boards will run you around $132, that’s a small price to pay to differentiate your wall from the typical Scarface posters found in college dorms around the world.

The Scarface Hockey Jersey is the biggest sleeper of this collaboration. The hockey jersey is featured in triple-white and a Red/Black-White colorway (featured above). Each jersey has cut and sewn “Scarface” spell outs at a diagonal across the front and “Montana” on the back with the number 83 patched on the shoulders and back representing the year the movie was released. This piece will be priced around $148 using the 100 percent polyester quality garment that is standard for Supreme hockey jerseys.

The second sleeper could be a limited piece so this isn’t a sleeper in the sense of it being an easy cop but rather the way your cousin’s 94 Honda Accord with nitrous is a sleeper. The World Is Yours Desk Lamp is the most fire accessory to be released so far this season. The lamp won’t run out of battery like the Andis clippers (because it has a cord), it’s more functional than the blimp and you don’t have to ingest something to use it as you do with the sake set and chopsticks. This same lamp was originally released by Universal Studios with a limited run of 2000 pieces and one is currently on eBay for $1000 (shout out to @supcommunity for the info). The only difference between the original lamp and the Supreme recreation is a subtle monochromatic Supreme logo at the base of the lamp. The minimal branding makes this accessory a sleeper because it doesn’t scream, “Hey, I like Supreme!” to everyone that enters your space. If only this lamp doubled as a fountain.  Estimated retail for the Desk Lamp is $98 dollars.

I have the same issue with this week’s two duds so we’ll lump these together for ya. Although I claim to be a subtle hypebeast (not being drawn to exuberant branding) I would have enjoyed the Scarface Embroidered Leather Jacket and Scarface Sweater if Supreme swamped the “Scarface” spell out on the front for “Supreme” as they did with the Scarface Split Tee and Split Skateboard.

I recognize that including the Scarface branding on these pieces could have been written into the terminology of this collaboration, but if that is the case then why do the tee and board differ from the rest of the collection? Even with the Supreme branding the sweater still would have been dead to me as it’s just a bit too loud. The all-cotton ugly Christmas sweater is estimated to be priced at $158, and although 2 Chainz made millions on his ugly sweaters I expect more from Supreme despite their recent acquisition.

The Leather Jacket features Supreme branding on the back, a simple swap of the “Scarface” spell out from the front to the back would have solved the branding issue. The jacket consists of cowhide leather, a satin lining, full zip closure and embroidered graphics on the front, back and sleeves. Despite all of these lux materials and an estimated retail price of $598, the jacket still comes across as a purchase from your middle of the mall streetwear store.

The verbiage used by Supreme for this week’s drop is a little concerning.

Many have speculated that this is in regards to “The World is Yours Desk Lamp” as it may only be sold in the States due to it utilizing the standard North American NEMA plug, however, this has not yet been confirmed.

Check out www.supremenewyork.com/news for the rest of the collection and good luck.

Sound off in the comments if you agree or disagree with this week’s Bangers, Sleepers and Duds.