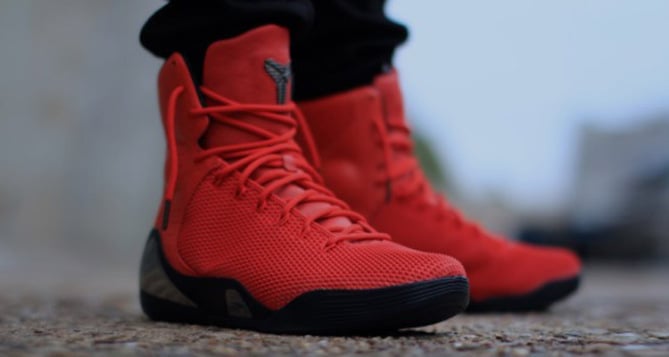 Tonight, Kobe Bryant will take the court just 31 points away from passing Michael Jordan’s career NBA scoring mark and what better time to deliver the best photos yet of the “Red Mamba” Nike Kobe 9 High KRM EXT.  Images of the “Red Mamba” Kobe 9 EXTs have been pretty scarce so far with mostly poorly lit, low resolution, camera photo shots.  With just a little more than a week until release, we finally get some good shots and even better that they are on-feet.

The “Red Mamba” Kobe 9s feature a textured material covering the front of the shoe like we saw on the back of the “Red October” Nike Air Yeezy IIs that dropped with no notice in February.  Embossed red premium leather cover the back part of the shoe that extends up the ankle in the high top cut.  Unlike the Red October Yeezys though, the Red Mambas run with a black outsole accented with a black chrome panel replacing the carbon fiber seen on the Kobe 9 Elites.

Release date is set for December 19, 2014 priced at $275 available to a very select number of Nike Sportswear doors and online at Nike Store.  Folks in Arkansas can count on Rock City Kicks to get their pair.

UPDATE: The “Red Mamba” Kobe 9 release date has been changed to December 19th.