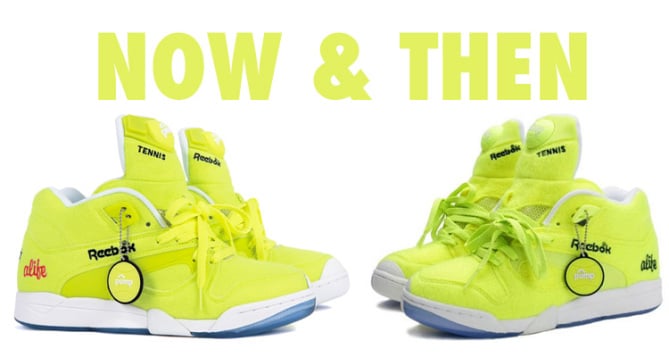 With so much attention on the shoes, crazy resale prices, and consumers looking for more, the time couldn’t have been better for the next release by ALIFE of the “Ball Out” Reebok Pumps.  Once again taking inspiration from tennis balls, the second release of the collaborative project between ALIFE and Reebok brought the shoes in orange and white – the two other colors of Tennis balls you would find throughout history.  Releasing on Black Friday, November 24, 2006, the shoes were again an instant sell out with a chase that soon followed.  A year following that launch came the Black/Neon and Pink colorways of the “Ball Outs” that were yet again another gone in a flash drop.

Since the debut the brand has had many collaborations with a long list of brands, but if you ask folks at the Rivington Club, this is one of their favorites.

On a tradeshow floor at the Reebok booth, a casual conversation between ALIFE and a Reebok director got onto the topic of the “Ball Out” and a return and reissue of the shoe.  As Jesse said to me, “we wanted to bring it back, but wanted it to be different from the first drop out of respect to the OG heads.”

Jesse and many of his colleagues at ALIFE come from an era before retro, re-retro, and re-re-re-re-re-retro of the same exact shoe.  Even if there is a slight change that isn’t noticeable to anyone else, it was important to them that this bringback of the original colorway of the “Ball Out” Court Victory Pumps would be different from the first run.

What makes the 2014 release of the “Ball Out” Pump even more special to me (still have a DS pair), is that the red stitching of the ALIFE cursive logo is exactly how the first sample ever produced was done.  In essence, tomorrow’s “Ball Out” release is just like the initial concept that was sketched back in 2005.

The ALIFE x Reebok Court Victory Pump “Ball Out” releases exclusively at Alife Rivington Club and online at rivingtonclub.nyc for $200 – the OG price.