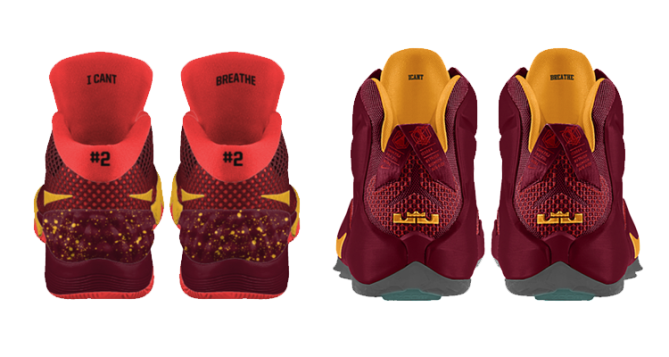 Last night, LeBron James and Kyrie Irving along with many other NBA players took the court in Brooklyn wearing “I Can’t Breathe” shirts in support of Eric Garner.  The bold statement follows Derrick Rose’s on court pre-game statement this past Saturday as well as one made by St. Louis Rams players who demonstrated in support of Mike Brown.

The big sneaker story yesterday was the debut of the NikeiD KYRIE 1 on court which was announced several hours before the game tipped off.  Inspired by the statement of Kyrie and teammate and fellow Nike signature athlete LeBron James, I went online to see if I could order the KYRIE 1 and LeBron 12 with “I Can’t Breathe” personalized on the shoes and sure enough I was able to.

Last decade there was some online controversy over what words and phrases NikeiD would allow or not allow on their products.  References to child labor, sweatshops, political figures, crime, and other controversial subjects were usually disallowed.  Hopefully, Nike will allow consumer to customize their shoes with this message seeing as it is something done by the respective athletes who endorse the products.