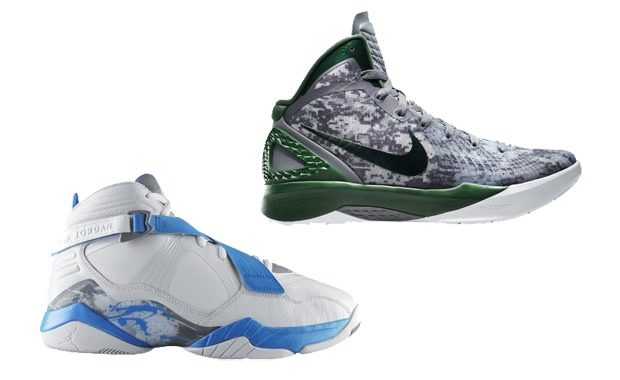 NBA fans are still suffering due to the lockout, but that doesn’t mean basketball is non-existent. Tomorrow evening, the Michigan State Spartans will take on #1 University of North Carolina in one of the most unique basketball games ever played. The game, which is referred to as the Carrier Classic, will be played in San Diego on the deck of the USS Carl Vinson in honor of Veteran’s Day. To coincide with the game, Nike and Jordan Brand will be unleashing two sneakers inspired by each brand’s team at midnight. Nike will unleash a Cool Grey/Gorge Green-White Hyperdunk 2011 that possesses a camouflage upper. Jordan Brand will release a UNC themed, white and university blue Jordan 8.0. As stated earlier, visit Nike’s online store for both sneakers’ release at 12AM tonight