While most align Oklahoma City with the earliest stages of Kevin Durant‘s NBA career, the infancy of his leap to the pros after one year at the University of Texas was spent in Seattle. Before the Supersonics moved to Oklahoma, in 2008, Durant laced up the same glowing hues Gary Payton and Shawn Kemp once did.

Nike pays tribute to Durant’s time in the Emerald City with a budding KD 11 PE. Dubbed the “Seattle Blends” edition, the pair was produced with tonight in mind, as Durant and the Warriors travel to Seattle for a preseason game against the Sacramento Kings.

The shoe was first seen on Seattle Storm forward Breanna Stewart back in June. Durant will lace up the shoe tonight in the city that drafted him. This player exclusive isn’t expected to release at retail. 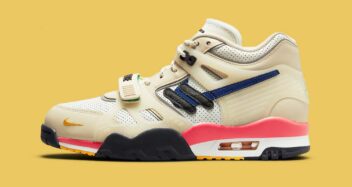