When it comes to shoes, comfort is everything. Whether you’re running on a treadmill, hitting the clubs with the homies, or just hanging out at the crib, the comfort a shoe brings is instrumental to your everyday life.

In the world of skateboarding, your feet are everything. Balance. Comfort. Power. It all stems from your legs and feet. Professional adidas skateboarder Miles Silvas talks about the importance of comfort, his current rotation, an upcoming signature colorway and much more in our latest installment of My 5.

“The shoes are everything for me,” Silvas mentions. “They have to be on point because if those aren’t right, you’re not going to be skating right. It’s really important what shoes I wear and what shoes I get.”

Take a look at the comfy and stylish rotation Silvas has on deck below (pun heavily intended) and be sure to checkout the video as well.

Silvas: I like the rubber toe a lot, it has a ton of grip and aesthetic wise I dig it because I can just wear it when I’m just chilling because it’s a cool silhouette just to put on. Skatewise, that rubber toe is what makes it special to me compared to other skating shoes because they tend to have suede and leather. The rubber toe makes them last a little longer too. It’s a nice little switch up from your everyday shoe. I have pairs on deck of my own colorway, too. It’s crazy. My family was always super into adidas, and I grew up with the brand so having my own colorway with my name on the shoe is crazy to me. I’m pretty psyched about it.

Silvas: It’s a cool shoe, man. I like the upper a lot. It has a lot of similarities to the Ultra Boost, obviously it’s Yeezy so it has a little more going on the upper. The shape and comfort are pretty similar to the UBs. They’re supper comfy. I really like the Zebras because the white and black make it looks like they’re some scribbling shit going on. They’re mad comfy.

Silvas: I love all-white shoes and the Stan Smiths are pretty much all-white. They switch out the color on the heel tabs and I like that a lot. It’s nice having those on deck if I ever want to rock an all-white pair. The silhouette is simple too — there’s not too much going on top or on the side. I have one pair of the green ones but the navy ones are my go to.

Silvas: I actually used to skate in these back in the day. I’d buy them at a soccer shop and just skate in them. I always loved them for the colors, they were always super fresh. I love the OG logo they have on the heel. They’re really cool. 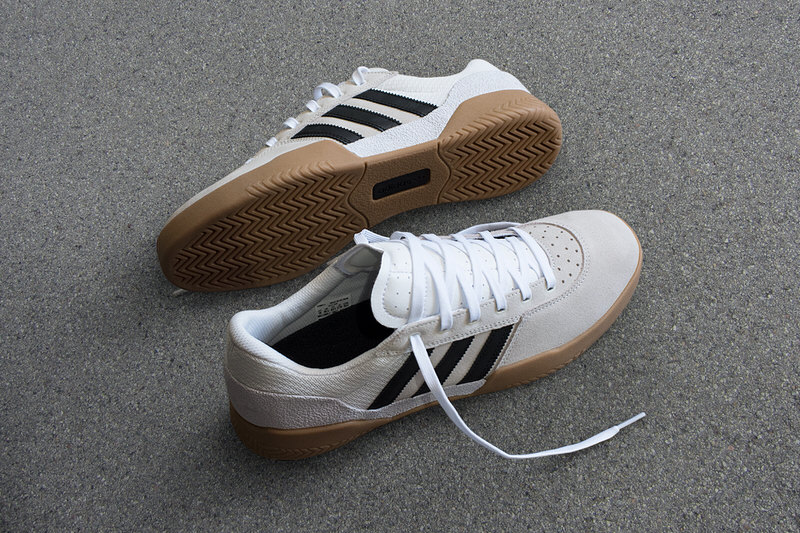 Silvas: It’s always nice to have a shoe that you can just thrown right out of the box and it’s ready to go. You don’t have to break it in over a day or anything. As soon as you put it on, it’s ready and it works right. I hadn’t worn the shoe until the commercial actually and I just put it on and was ready to go. I’m weird about shoes. They have to be perfect. Sometimes I have to switch out the insoles or break them in but these were perfect out the box.

As you can tell, the skateboarder’s current rotation highly emphasizes comfort and style. Specifically the adidas City Cup. In the latest adidas clip, Silvas and adidas do something unprecedented in the world of skating. By implementing the method of a one-take video, that is just one shot without cutting anything out, Silvas skates through seven blocks in Koreatown in Los Angeles. Check it out below.

Keep up with Miles Silvas on Instagram here. Be on the lookout for his own signature colorway of the City Cup soon.