Before bots, before blogs, sneakerheads were united as an underground culture of collectors who congregated at shoe stores hours before they opened. Digitally speaking, they found each other — and in many cases found themselves — on forums that connected passionate purists from all corners of the globe.

Still at it, Aftermathic, our good friend Angela Marie, better known as Ellaesco, has combined her West Coast roots with a New York State of Mind for one of the iller collections still runnin’. The Master of Air as selected by the Swoosh has been a Nike head since the days of ISS forums and NikeTalk, forever about the chase and always about wearing them and sharing them with other collectors with the same love.

Renowned for her runners, we caught up with Ella for a special Air Max Day edition of Monday My 5s. 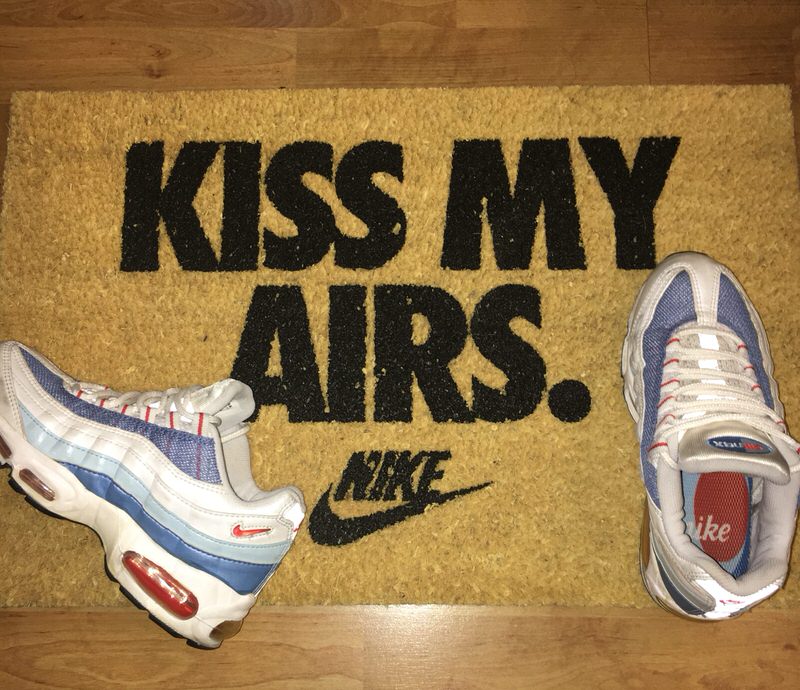 Ellaesco: I remember being between apartments and crashing with a friend. Everything was in storage and I was sleeping on the floor surrounded by shoes. While I was there, somebody posted on the forums these shoes that we called the “Lobster” 95s. Someone was wearing them on the ISS Forums like back, back in the day and they were able to help me get them.

I like the shoes to be the statement of my outfit. Back in the WDYWT NikeTalk days I may have gone matchy with them, but I don’t go too matchy matchy now. I definitely dress from the feet up, though. I’ll wear a solid to play off them but I won’t try to match every color on the gradient of the 95. 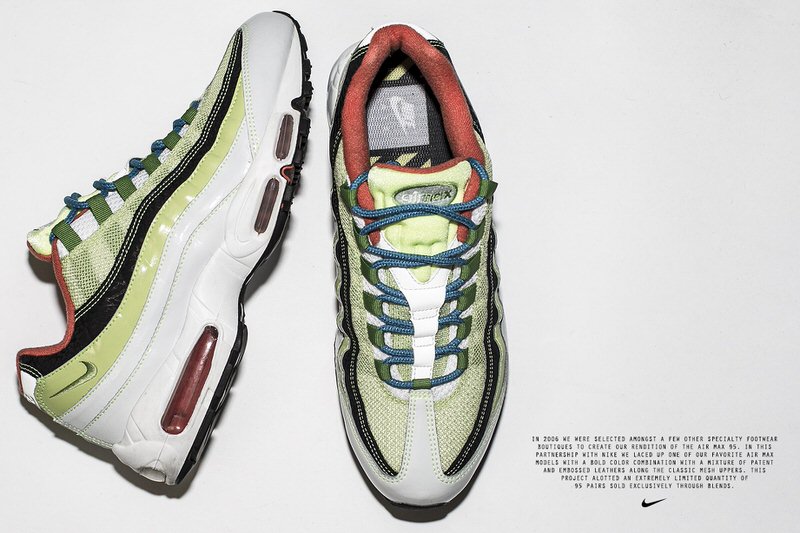 Ellaesco: These are a size too big but they still get wear from me. I’ll wear baggier denim to down play how big they are. You know the story, these were $95 and they did 95 pairs. They came in an iD box and the price point was crazy for an Air Max 95! I got these direct from Blends back in the day from a friend I met on NikeTalk. 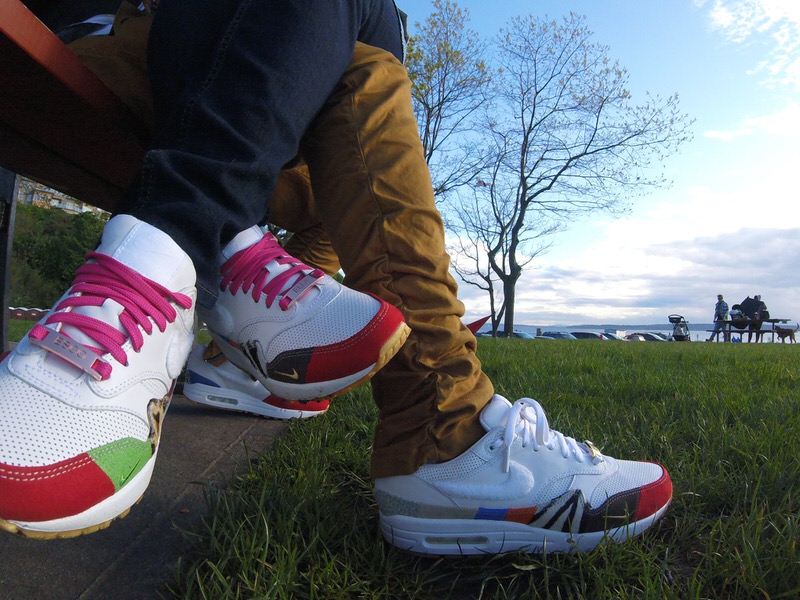 Ellaesco: When we were selected for the Masters of Air documentary we didn’t know much about it. They brought us all out to the Nike campus and we got to meet each other and the whole Sportswear team. We got to meet Tinker and he got to know us which was really cool. Listening to Tinker tell stories about more than just sneakers but his journey? It was a moment.

So those shoes, they presented them to us in a room that many people haven’t seen on campus — the Winnebago in the Kitchen. They asked us about our grails and they put it all into one shoe.

The shoes aren’t about the hype to us, they’re really about all the stories that went into the shoes and meeting everyone. The relationships that formed because of it you wouldn’t trade for anything. I wear them for special occasions like Air Max Day last year but I’m kind of trying to wear them so they don’t die out, but maybe the idea is to wear them on my wedding day — they are white!

To this day, I still have a group chat with everyone from the Masters of Air experience. We still all talk, but it is a little bit more poppin’ in March… The group’s been really excited about the “Animal” Pack, though we didn’t expect the 95s to be so limited. Contrary to negative popular belief, we don’t get handed every single pair every March so we help each other find stuff. Just like Stevie said in the doc, it’s still all about the chase — it’s about the work it takes to obtain a pair we think is dope and really like. We’re camping, hunting online and hitting the SNKRS app. 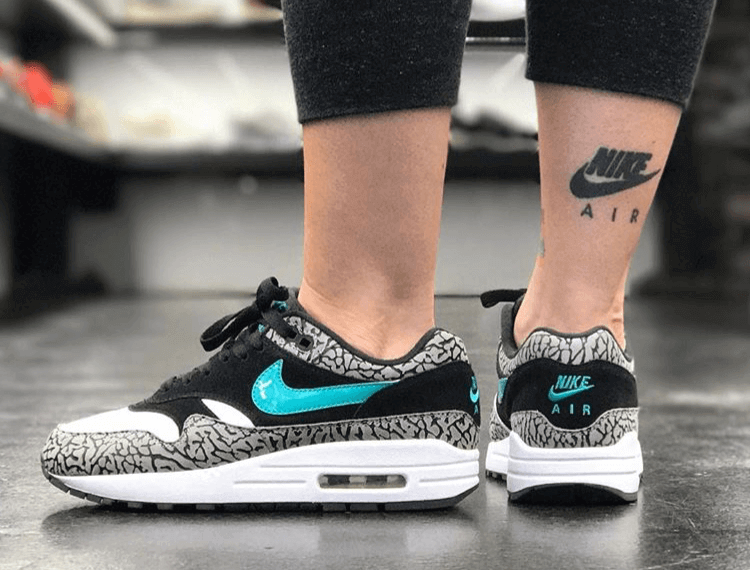 Ellaesco: I wear those a lot. They pretty much go with everything because I don’t wear a lot of printed shirts — at the most a vintage shirt — and I like the shoe to speak for the whole outfit. Anything atmos in recent years is exciting to me because it’s something I wasn’t able to obtain in the past. My size is hard to acquire and sometimes not even made! I didn’t have these, the Animals or the Viotechs back in the day and if they were made in my size I haven’t found them yet. 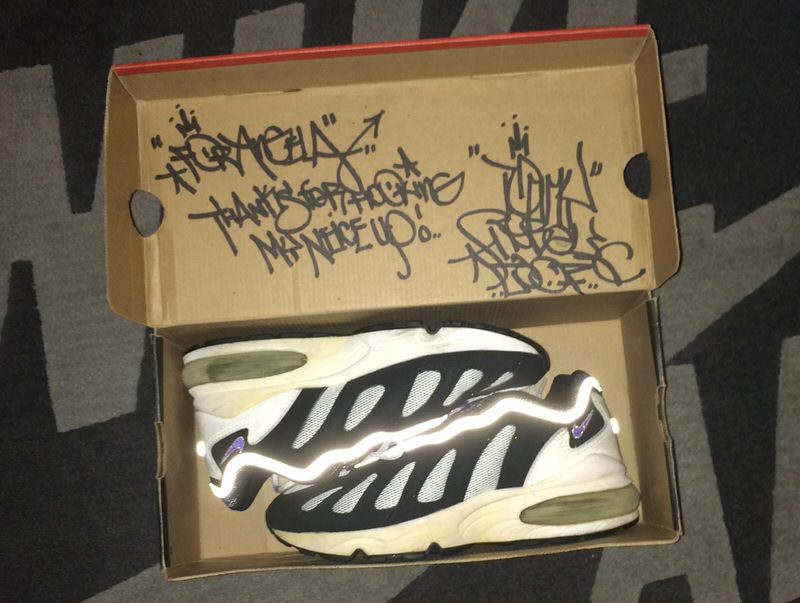 Ellaesco: These were the result of a chain of gifts. My good friend from Nike Talk, Crabby Rangoon out of Chicago, he got me a pair of OG Huaraches. They were a size too small so he got me a second pair. Around the same time, my friend Tommy Rebel in New York had a niece in the size of the Huaraches I couldn’t wear. I sent him the Huaraches, he gave them to his niece and it made for this little girl in Brooklyn walking around in OG Huaraches, it was beautiful! Shortly after, he was in Philly and he found a pair of Air Maxes he thought I’d like. He called me, asked me my size then he hung up on me! He wouldn’t tell me what they were. Then a week later I got these OG 96s and it was just this ill karma thing of all people just thinking of each other.

That was in ’06, ten years after they released. I definitely wore them all I could and wore them with no fear when I got them. Now I’m a little bit more careful with them.

Keep up on IG with Ellaesco