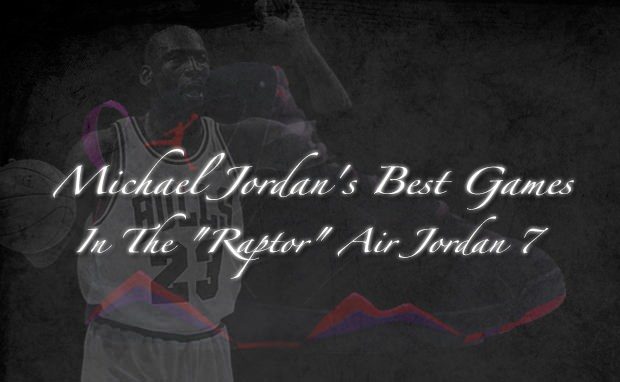 Strong hip-hop ties and 90?s wave color blocking make it easy to see how casual friendly the Air Jordan 7 ?Raptor? is. Don?t get it twisted though, when Michael Jordan wore them it was all business. Baring no inspiration from the Toronto team to be, purple reigned in the 1992 Playoffs as MJ led the Bulls to a second straight ring in his charcoal colored kicks. Check out seven of Jordan?s best games in this weekend?s big release.

The Air Jordan 7 may have been the funkiest Mike?s footwear got from a colorway perspective. After playing much of the ?91-?92 season in the wild ?Hares?, MJ brought out the purple-splashed ?Raptors? for the postseason. Good call. Jordan went for 46, 11, and 9 in his playoff opener which looked more like an exhibition game.