It only takes a few minutes of speaking with Lonnie Walker IV to understand why the San Antonio Spurs didn’t hesitate to select him when he was still on the board at No. 18. SLAM Magazine recently dubbed Walker as “The World’s Most Interesting Rookie.”  He can speak thoughtfully equally on topics such as religion, world news and pop culture just as easy as he can talk hoops.

With an inquisitive nature and strong opinions on various worldly affairs, it’s easy to see why the 19-year-old has already developed a quick bond with coach Greg Popovich. While too young to indulge in any of his coach’s private label pinot noir, Walker is excited to have the opportunity to not only play for an organization that is the model to many in the NBA, but also arguably the league’s best coach.

Along with his on-court talents, Walker has a strong desire to reach back to the youth of his hometown of Reading, PA. It’s traits like this that made it an easy decision for adidas to make him one of only two signings — Atlanta Hawks’ Trae Young being the other — in this year’s NBA Draft class. “Lonnie is a true original,” says agent George Langberg of Catalyst Sports & Media. “His charisma off the court combined with his electrifying play set him apart. Lonnie and adidas are a natural fit.”

We spoke with the Spurs rookie to hear how he’s adjusting to NBA life, his deal with adidas and what his personal goals are this season.

Nice Kicks: How hectic have things been for you since being drafted?

Lonnie Walker IV: It’s definitely a very quick transition because you’re talking about going to school for 19 years of your life, waking up at 8 AM, going to class, going to work out and it’s always been academics and basketball. Now, you have an immediate transition on strictly playing basketball and having some freedom here and there. It’s been pretty great and now transitioning into NBA life and living how most NBA players live, it’s ridiculous, honestly.

Nice Kicks: You were able to get your feet wet some during Summer League. How would you grade your performance and what was it like to finally get a small taste of what’s to come?

Lonnie Walker IV: It was great just to get a first look at just how the NBA style is – the physicality, intensity and conditioning. Once I caught my rhythm, the game became a lot easier. I had a great time. I met a couple of teammates, played with two of them and it went well.

Nice Kicks: Shortly after that, you traveled to Greece. Was that something that had been on your bucket list?

Lonnie Walker IV: Yeah. I love to travel. Even with going to Greece, it was a similar routine. I was still lifting, push-ups, pull-ups, squats and all of that stuff in the morning – just staying engaged and not losing sight of what’s going on in the future. It was definitely one of the dopest trips I’ve ever had.

Nice Kicks: What were some of the things that made it that enjoyable?

Lonnie Walker IV: We visited an abundant amount of islands. The water was so clear you could see the bottom of the ocean. We had black sand in front of our hotel and the beach was beautiful. It was great.

Nice Kicks: You and Pop have already gotten the chance to sit down several times with one another. What’s it like to now get to know him on a personal level?

Lonnie Walker IV: It’s been a lot easier than I thought. Sometimes, when you see a guy in the media, you think certain things. I kind of thought Pop was a more critical guy but when you get to meet him, he kind of treats you like a son. He knows a lot about life on and off the court and that’s the type of person I am. Everything he talks about and the things he’s interested in are things that I love to listen to and think about also. Me and him have a really great bond and I’m just grateful to be a Spur. 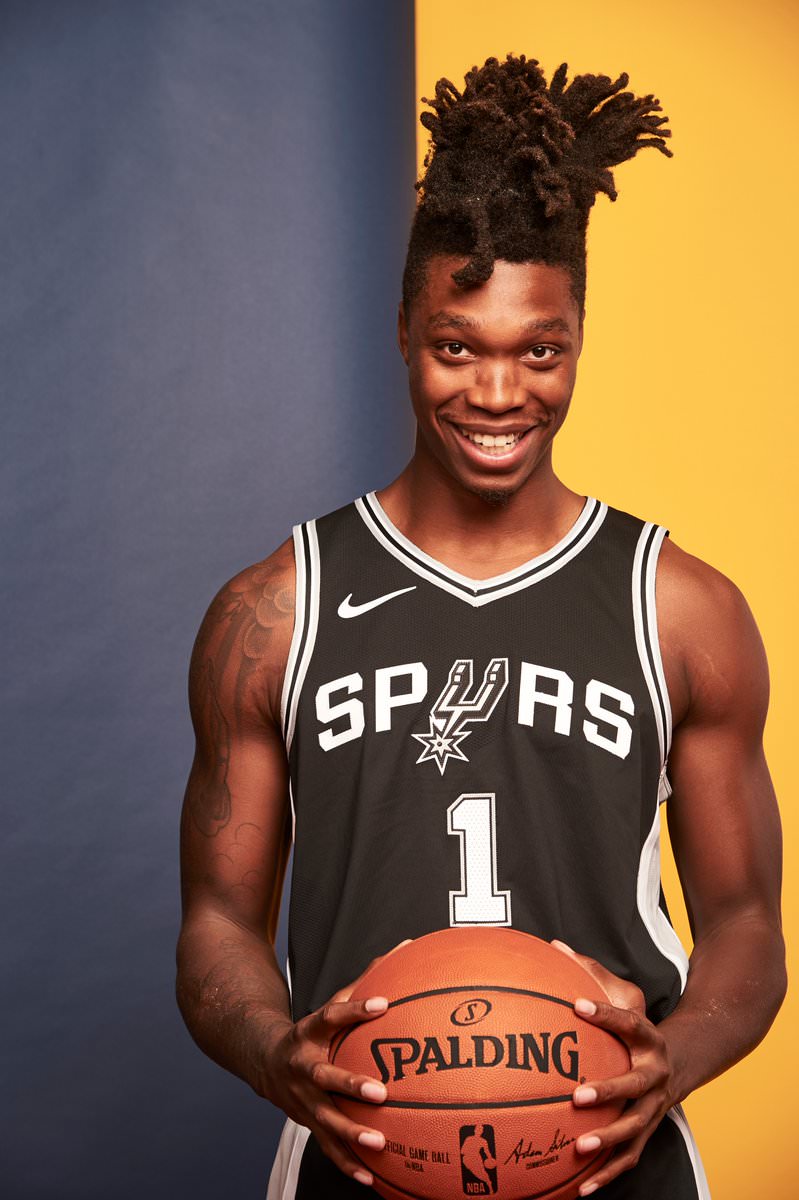 Nice Kicks: Just from your short time in being a Spur, what are some of the things that make it a special program to be a part of?

Lonnie Walker IV: It’s just the little things — how you approach life on and off the court. We have workouts at 7, [Pop] expects you to be there at 6:15. He doesn’t want you there at 7, 6:50 or 6:45. He’s very decisive about the time – don’t be late and just do everything the right way and try as hard as you can. As long as the technique is getting better day-by-day, that’s all he asks for. Right now, I’m just working on increasing my IQ, my technique and just getting stronger and better.

Nice Kicks: On your Twitter profile, you have a Tweet pinned asking for the best places to eat in San Antonio. Have you gotten a chance to get out and try any places?

Lonnie Walker IV: I think I went to one or two. I’m going to relax on going out to every restaurant because I have to get back to cooking and eating a lot healthier. It was a good way for me to interact with the fans there. They’re just amazing and they’ve been welcoming and helping me out, so I thought what better way to interact with them than to get their insight on all the great foods that San Antonio has to offer. I think it’s like 900 or more spots, so the fans have helped me out with that.

Nice Kicks: There was a time where adidas would have several rookies from draft classes signed. This draft, only you and Trae Young were signed. What’s it like to be one of those guys that they went after?

Lonnie Walker IV: It just shows that they value the hard work. As the 18th pick – let alone going into the draft – I never thought about being signed by adidas or any brand. When they met with me, they gave me a lot more motivation because they saw something in me that no other brand did in just how they talked to me and respected me. They were really proud of my perspective, how I live and approach the game. I think adidas is a lot more different than any of their competitors just based on conversations like that. Adidas is more than just that name and brand and I’m just so grateful to have the outcome of partnering with them. 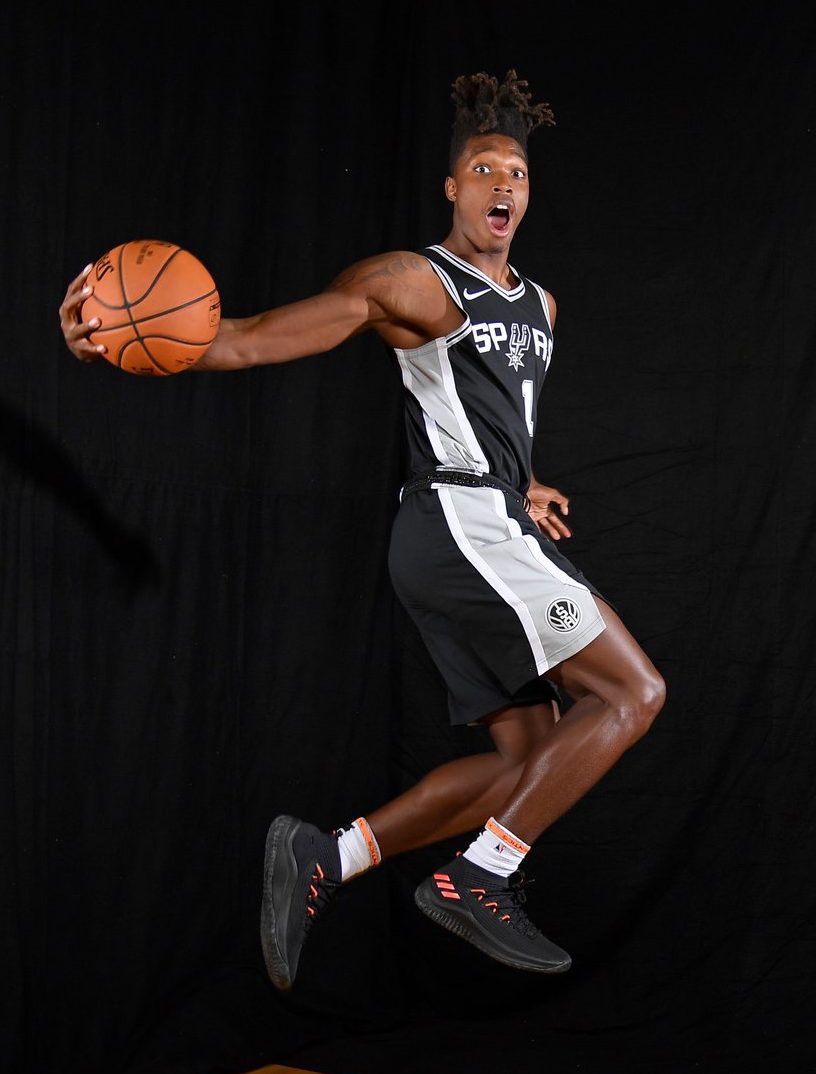 Nice Kicks: What would say are your top-five models from them currently?

Lonnie Walker IV: On the floor, I love each volume of James Harden’s shoe, all the Lillards. Those are my top two. Off the court, pretty much any walk-around. I’m not even going to gas it, the Yeezy 350s and 500s, the Ultra Boosts. They’re so comfortable and it’s just like you’re walking on clouds. After workouts and I want to relax, I’ll have a nice pair of adidas sitting there, ready to be worn. They’re that comfortable.

Nice Kicks: You and Eric Wise (adidas Category Director of Merchandising) helped donate 300 pair of adidas to children in Reading’s Blacktop Basketball League. How did that come about and why was that something you wanted to do?

Lonnie Waler IV: Since day one when I met with adidas, they listened to all the little things. One thing that they knew about me is that I’m very for my community and making a difference in people’s lives and changing them. My entire life in Reading, I always liked to motivate the youth and show them that you don’t have to leave there to become something special. You don’t have to make an excuse to why you didn’t become who you wanted to be. Once they heard that, they wanted to help out immediately. It wasn’t like they were going to do it just because I was with adidas, it was they wanted to do it because that’s who they are and it’s genuine and real. That was amazing. Just to continue to talk to youth, give those shoes to them since all of them were like “I want to be like Lonnie,” – it just brings a lot of motivation and happiness into my life because I know that day-by-day I’m changing lives little by little.

Nice Kicks: What are some of the personal goals for your rookie year?

Lonnie Walker IV: My checklist is just centered on being the best player I can be whenever I touch that court. Whether it’s practicing, lifting, jogging — I just want to do everything with a purpose and just have a great outcome. I definitely want to become one of the top defensive players in this rookie class and that’s my focus. My offensive game will speak for itself.