As Kobe Bryant enjoys retirement from the NBA, few would argue Mr. Bryant’s legendary status. So legendary in fact, that may argue Kobe to be the second greatest player behind Michael Jordan. While that may be a hot take to many, the battles between Kobe and MJ were rather enticing during their playing days.

From Jordan’s time with the Bulls and then eventually the Wizards, the matchup between these two shooting guards will forever live in NBA lore. With that in mind, take a look back at the best battles on court between Kobe and MJ. 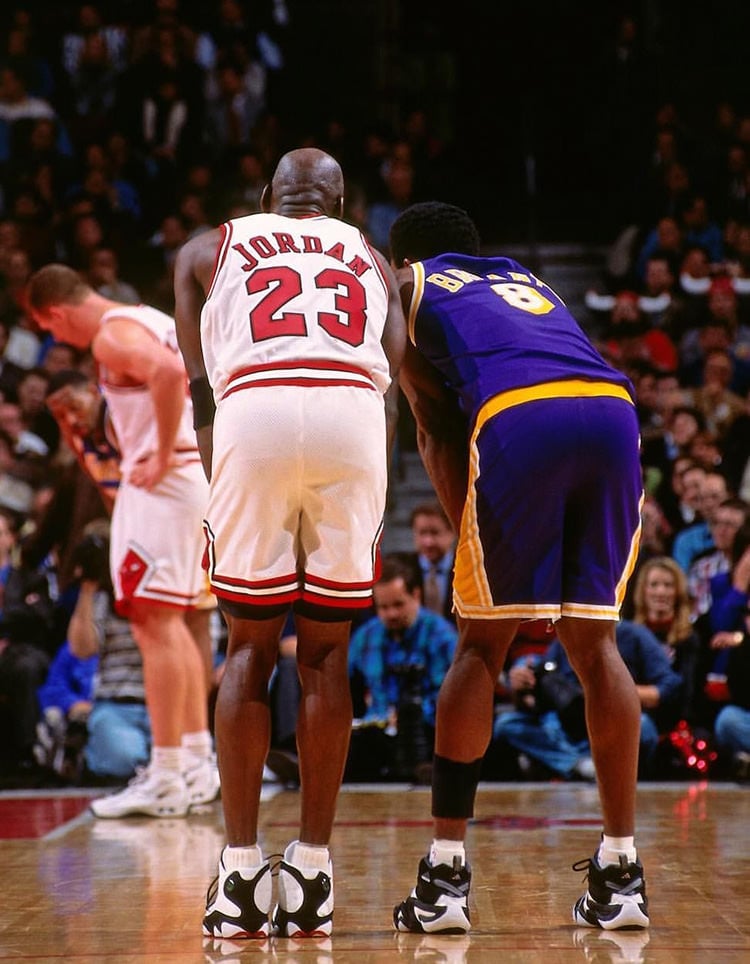 Technically speaking, this December 1997 matchup wasn’t the first series between Michael and Kobe, but it did mark the first occasion in which both players filled the stat sheet and provided a memorable game. Second year player Kobe Bryant would score 33 points, dish out two assists and snag three rebounds in the adidas KB8 model. While Bryant’s numbers were stellar, MJ and the Bulls secured the win as His Airness, while rocking the Air Jordan 13s, hit 36 points, dished out four assists, and recorded five rebounds.

Things remained consistent during Kobe and Michael’s second matchup of the 1997-98 NBA season as they each sported their customary signatures. Once again, Michael got the better of the up-and-coming star, as MJ tallied 31 points, two assists and five rebounds in a loss; all while rocking the White/Red colorway of the Air Jordan 13. As for Bryant, the second-year pro laced up the White/Black makeup of the adidas KB8, as he scored 20 points, snagged four rebounds and handed out an assist.

Kobe Bryant wasn’t even a regular starter for the Los Angeles Lakers but still garnered a starting roster spot within the 1998 NBA All-Star Game. However, in what seemed to be a theme early-on in their respective matchup, Michael Jordan would steal the show, securing MVP honors with 23 points, eight assists and six rebounds in the “Playoff” version of the Air Jordan 13. Ultimately, Kobe didn’t disappoint as he tallied 18 points, dished out an assist and snagged six rebounds in the “All-Star” version of the adidas KB8.

After Michael secured his sixth championship with the Chicago Bulls, he decided to walk away from the game and pursue a front office and ownership position with the Washington Wizards. Perplexed by the inefficiencies  his team showed on the court, MJ got the urge to return to the hardwood for the 2001-2002 NBA season, thus re-booting his annual matchups with Kobe Bryant and Los Angeles Lakers. The two legends would meet in February of 2001, as the dominant Lakers led by Bryant would come away with a convincing win. Rocking the adidas The Kobe Two, Bryant would tally a triple-double that included 23 points, 15 assists and 11 rebounds, while MJ scored 22 points, tallied six assists and five boards in the Air Jordan 17 Lows.

In a return to his hometown of Philadelphia, Pennsylvania, Kobe Bryant would match Michael Jordan’s All-Star MVP of year’s prior as Bryant’s stellar 31 point outing in the adidas The Kobe Two helped the guard secure MVP honors. While Michael Jordan was the second leading vote getter in the East, the Wizards guard was only able to score 8 points in the Air Jordan 17.

The final game of the ’01-’02 season seemed to be a contest filled with second stringers as Michael only played 12 minutes and scored 2 points while dishing out three assists and tallying three boards in the Air Jordan 17s. However, for Bryant, it was business as usual as the youthful guard scored 14 points, dished out six assists and nabbed two boards in 33 minutes of action, all while rocking his customary adidas The Kobe Two.

During the 2002-2003 season, Kobe Bryant found himself to be a sneaker free agent as his previous deal with adidas had expired during the previous off-season. Taking an entire year to wear various dope kicks, Kobe rocked a stellar Air Jordan 7 “Lakers” PE during his early season matchup against Jordan and the Wizards. However, Bryant would struggle from the field with a 39% average, as he scored 27 points, dished out four assists and shelved six rebounds. Ultimately, Michael and the Wizards defeated the defending champs, as Jordan ended with a stat line of 25 points, three assists and three rebounds in just 30 minutes of action.

In what would end up being Michael’s final All-Star Game, the iconic guard did not disappoint as he scored 20 points, grabbed three boards and dished out two assists. However, Michael’s signature play of the night was an illustrious fadeaway during overtime, which gave the East a two point lead. It seemed as though this moment in the Air Jordan 18s would be a fitting way to end Jordan’s All-Star Game legacy. However, in serendipitous fashion, Kobe Bryant was fouled seconds later and he hit two free throws to tie the game, in which the Western Conference would win in double overtime. Bryant paid homage to MJ by rocking the “True Blue” Air Jordan 3s, as his stat line of 22 points, seven boards and four assists helped secure the win.

In what would be the final matchup between the two iconic players, Kobe Bryant would provide a spectacular performance as he dropped an astounding 55 points in a pair of Air Jordan 8 PEs. In addition, Bryant secured five rebounds and dished out three assists in a convincing Lakers’ win. However, Michael would hold up his end of the bargain as he finished with 23 points and four assists in the Air Jordan 18s.

So, who won head-to-head? 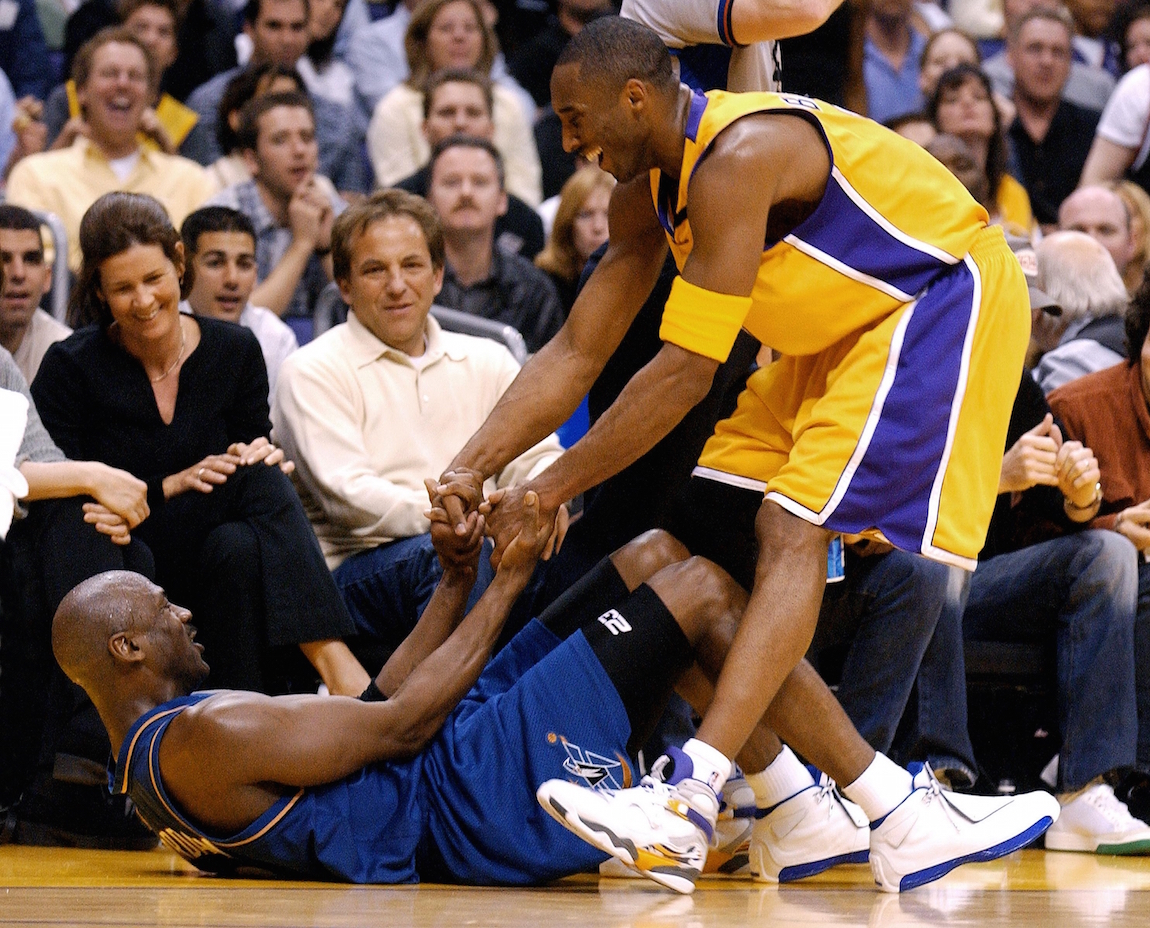