After initially signing a shoe deal with Chinese brand Anta in 2014, Golden State Warriors star forward Klay Thompson has signed a new 10-year renegotiation extension with the company, Nice Kicks has exclusively learned, locking him in with Anta until 2026.

The long-term footwear and apparel endorsement deal, struck by Thompson’s Wasserman agent Greg Lawrence, Senior Vice President of Basketball, along with his business manager Joe McLean, will land the explosive sharpshooter among the top 10 highest earning sneaker endorsers among all NBA players. The deal could reach 10 years and $80 Million, with a variety of incentives incorporated into the contract, and will continue to grow his brand throughout both China and the US. An initial 6-year iteration of the contract was originally negotiated by Thompson’s prior agent, Bill Duffy of BDA Sports. Thompson then switched representation this past February, with his new agency Wasserman continuing talks with Anta and finalizing the 10-year length.

For Klay, the extension represents a continued growth for both himself and the Anta brand together, after he first signed on three seasons ago, unsure of what to expect. “I didn’t know much about Anta,” Thompson told Nice Kicks earlier this week in Shenzen, China on the newest episode of the Nice Kicks Cast. “One of my agent’s clients, Rajon [Rondo] was with them, and he said this brand had incredible potential and that the Chinese market, as well, was something that I could really dive into.”

Dive into it he has, as Thompson has been to China four times in total, twice for a multi-city summer tour throughout the country with Anta, after each of his NBA championships. This past week, Klay embarked on his latest tour, a 10-day trek throughout the region’s hoops-frenzied cities of Chengdu, Shenyang, Guangzhou, after hitting Beijing and other major cities on his 2015 tour.

From the onset, having his own signature shoe and individual player tours with the brand was an admittedly major sticking point of the deal, and something that Thompson particularly gravitated to.

“I knew with the other brands in the States, whether it was Nike or adidas, it was going to be tough for me to get a signature shoe,” admits Klay. “I knew with Anta, I would have so much input creatively. I was going to hopefully be the Michael Jordan one day of Anta. That really resonated with me, and knowing that I could be really big in China, that was really cool to me. The shoe market sometimes is overflooded in the States, and I thought, ‘Well, why not branch out and be global.'”

Since signing with Anta, the trajectory of Thompson’s rise in the league has been dramatic, now landing him among the league’s most popular players both domestically and in China.

“The last three years, my career just exploded, in the NBA and internationally,” continues Klay. “I was able to win two Gold Medals, two NBA titles, played in a few All-Star games and get to be on the world stage all the time. I don’t think Anta saw that, and I didn’t even see that. They were really excited about it, and I think I surpassed their expectations.”

By surpassing those expectations, even though he was currently under contract with Anta until 2020, the two sides opened talks on a new extension that would effectively tear up the existing terms of his original deal, retroactively starting fresh as of November, 2016. The 2014 agreement paid him around $2 Million annually — now he’ll be making around four times that much, with continued resources and marketing committed to growing his “KT” signature footwear and apparel line around the globe. 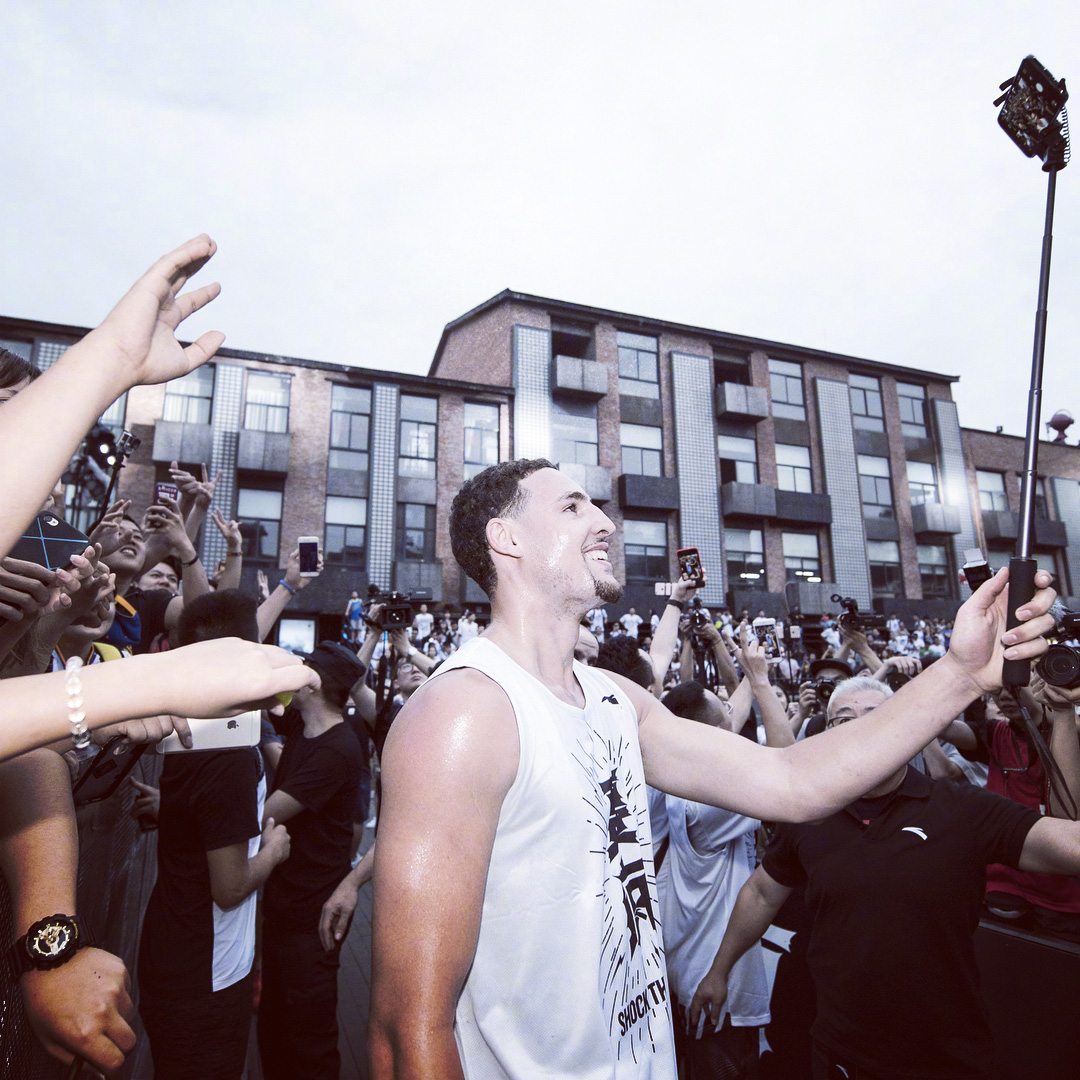 “Knowing that these guys got my back and they want me to be a lifer, that’s special,” says Thompson. “Not a lot of guys sign shoe deals like this. I’m very, very happy to be with Anta.”

From Anta’s perspective, the 2-time champ has been exactly the ambassador they were hoping for, as his blend of on-court success in Golden State and his enthusiasm in interacting with fans throughout China have made him one of the top-selling endorsers in the region. With more than 8,000 stores across China, Anta placed over 500,000 pairs of the KT1 in the marketplace, and has continually looked to ramp us his business since.

Later this fall, they’ll launch the KT3 together, along with an assortment of KT-branded basketball gear, casual apparel and lifestyle sneakers. While it’s been common for Chinese brands to sign NBA stars as they’re aging during the closing years of their career, Thompson’s deal is unique in that he’s just now entering the prime of his career at 27 years-old, with two titles already in tow.

“This partnership has been very successful, both on the brand side and business side,” says Shawn Liu, Anta’s Sports Marketing Manager. “Klay’s popularity has been growing with the success of the Warriors, which gives us a chance to elevate the Anta basketball brand positioning and product pricing.”

All week long in China, Thompson engaged with fans at a variety of events, whether it was a multi-story jam-packed mall appearance, an art gallery-themed showcase of his greatest shoes to date with the brand, or simply showing up to an outdoor court in Shenyang and surprising local kids by jumping into their pickup game.

Anta went all out to showcase the KT brand at each stop, and will continue to invest in both design and development resources to amplify his footwear series. They’ve just recently opened a new design center in Santa Barbara, California, bringing more brand contacts and industry veterans closer to Thompson in the states to further his product needs. The two sides will look to continue establishing the KT series in the US, with the understanding that the majority of the business will be coming from China.

“For almost every professional athlete, their shoe and apparel deal is their flagship partnership. For Klay to make this type of long-term commitment, it was important that the agreement be tailored to each side’s needs, while maintaining the flexibility to grow as he enters the prime of his career,” says Thompson’s agent Greg Lawrence. “This partnership could last for the duration of his playing career and beyond. Anta provides Klay the opportunity to be the face of a brand and to have the lion share of their focus and marketing, especially in China, where we have already seen the positive impact and returns for Klay’s brand as a whole.”

For many NBA players, it wasn’t until after the 2008 Beijing Olympics that a shoe deal with a Chinese brand was looked at as a viable option. Now, Klay Thompson is hoping to be “the flag bearer,” as Lawrence describes it, setting himself apart by being the league’s featured star partnered in China. 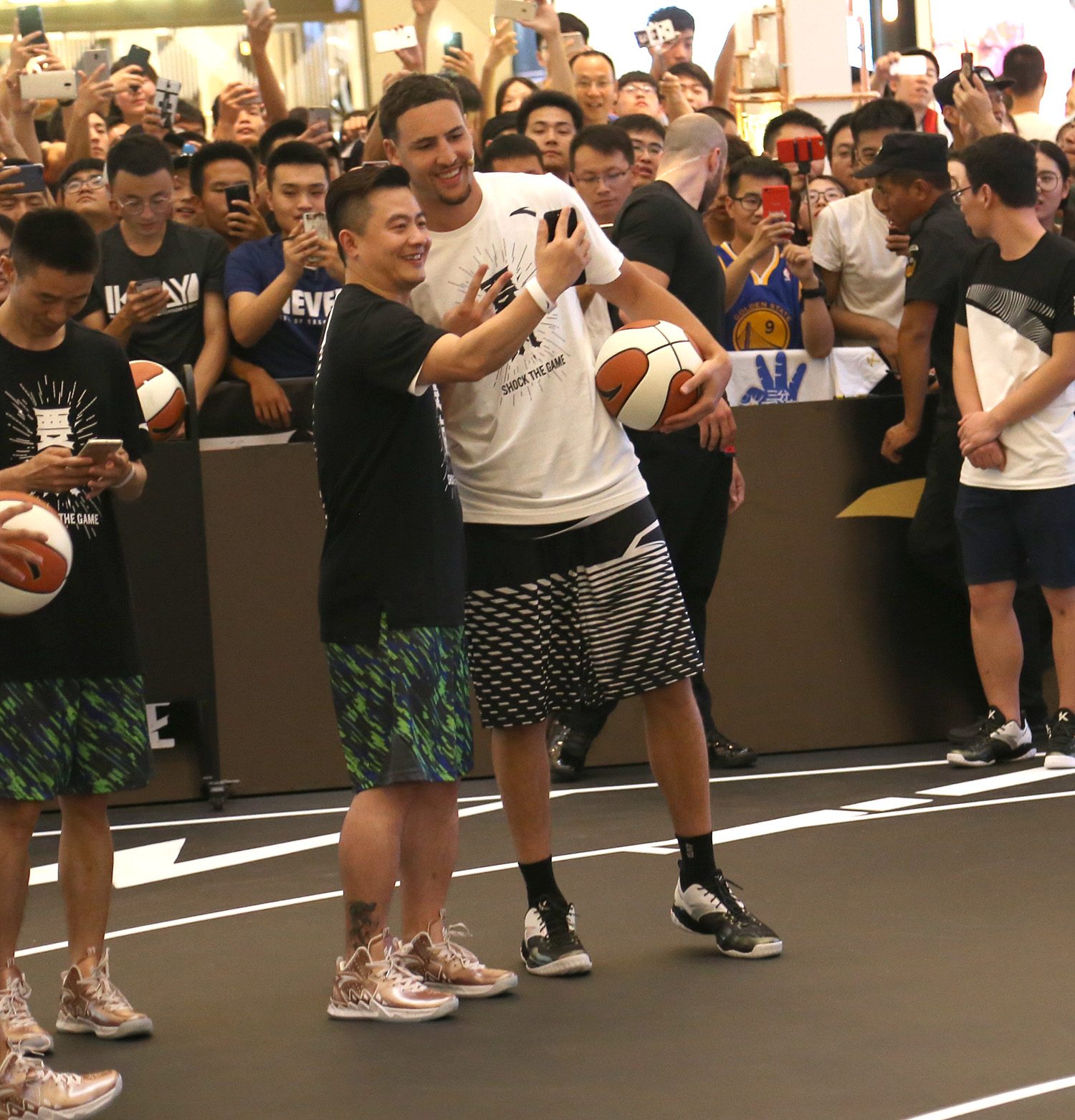 “Knowing I’m 7,000 miles away from home, and people just love to see me on sight, or I can just shake their hand or give them a smile and they freak out, it’s unbelievable,” smiles Klay. “I never would’ve envisioned this as a kid, [that] I’ll be an international ambassador for a shoe brand, it’s crazy. It’s unbelievable. All they want to see you do is shoot some 3s, make a couple dunks, miss a couple dunks [laughs], and have fun. They love it.”

As Thompson continues on his 2017 China tour with Anta, the celebration of their now-inked 10-year extension goes on, with both sides locked in through the prime of Klay’s career and eagerly looking ahead to the future.

“Of course we are excited, and we look forward to this long-term relationship,” beams Shawn Liu. “We will try to maximize this partnership in China and in the US.”

In order for the brand to continue to grow, Thompson is keenly aware that winning has been a key aspect of his rise. He’s hopeful the Warriors’ team success won’t be going anywhere soon, with the franchise looking to be a perennial Finals contender for years to come.

“Winning, not only has it put me in a different light how people view me as a player, but it’s elevated my brand so much. That’s why I really never want to leave man — winning is so fun,” says Thompson. “It overcomes any stats or any individual accomplishment. Especially out here with the Chinese fans. They really appreciate the teamwork and they love winners. That’s why Kobe is so loved out here, he’s a big time winner. They love his fierceness and they love his attitude. I’m trying to emulate the same thing — just win — and that’s all that matters. That’s what [Anta founder] Chairman Ding told me last night – ‘Championships. We are champions.’ I said, ‘You’re right, and we’re going to grow this brand together.’ Winning trumps all.”

For more on Klay’s extension with Anta, listen to Thompson’s recent guest appearance this week on the Nice Kicks Cast. 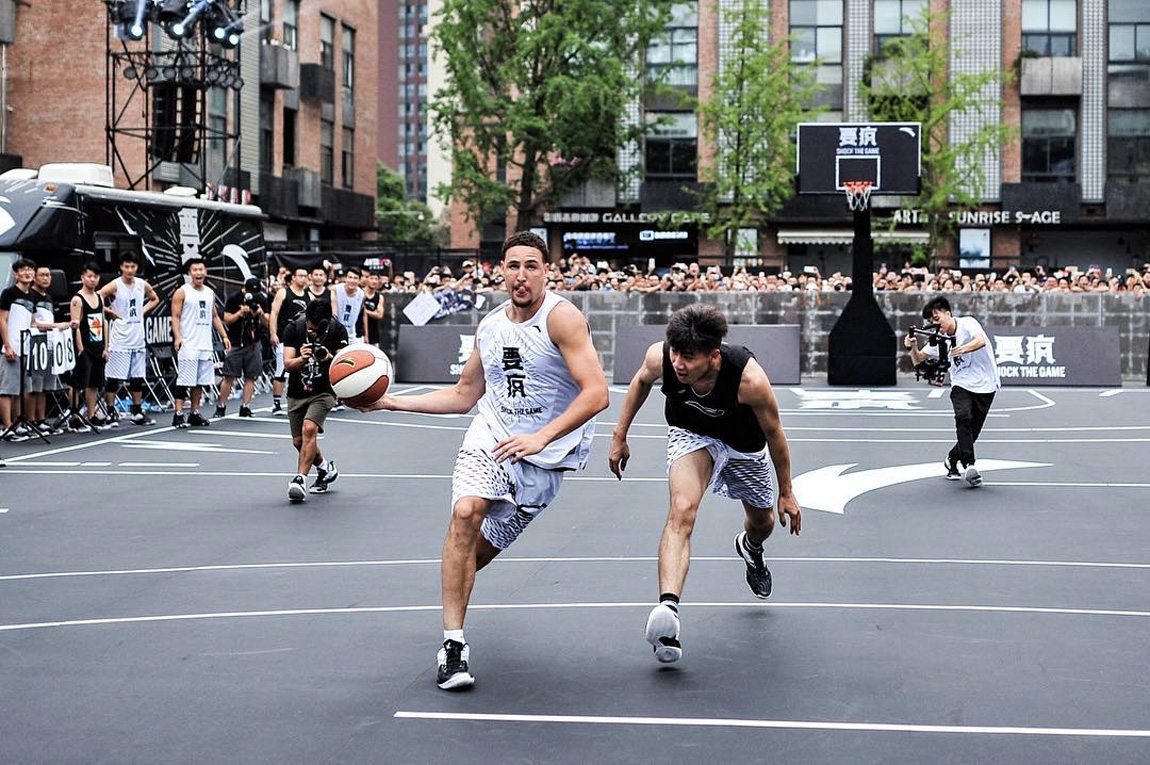 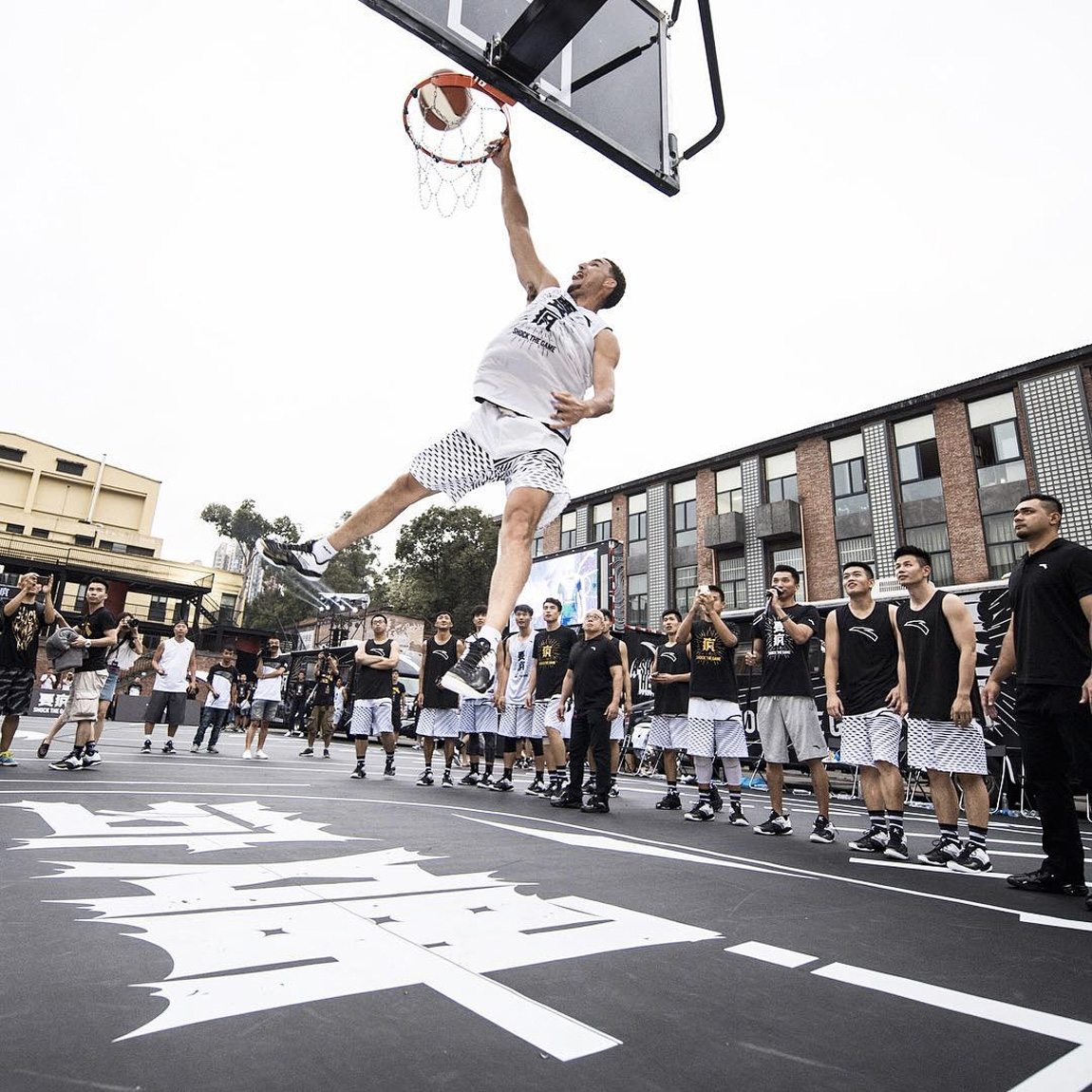