imagery via Notre Chicago and Nike

“Don’t come back until you get everything you want.”

Those words were delivered to Julian Gaines – better known as Juworkingonprojects – by his friend, Bryan Jackson (B Jack) a little over two years ago when Gaines decided to book a one-way ticket to Portland that would change his life.

On the heels of the launch of his “Game Worn” collection that will only be available at Notre and close to the completion of a weeklong summer camp he helped designed at Chicago’s South Shore Cultural Center to help bridge the gap for the next generation of young creatives, Jackson’s statement still resonates deeply within Gaines and leaves him feeling somewhat unfulfilled even with all he’s accomplished up to this point.

The collection is a conceptual project with Nike Chicago, taking the Sky Force and Air Vortex and reimagining both silhouettes through the view of Game Worn, meaning they feel broken in right out of the box. The story of his journey and the inspiration behind the project are told through the graphics on the sock liner, allowing you to not only walk in his shoes but to also see the path taken to reach his dream. Designing a collection of his own with the brand he pledged loyalty to long ago is something most will only dream about. While that’s humbling in itself, Ju’s purpose and his vision extend way beyond comfortable footwear for creatives; it’s about helping unify Chicago and becoming the inspiration and resource that he wished he had as a youth. 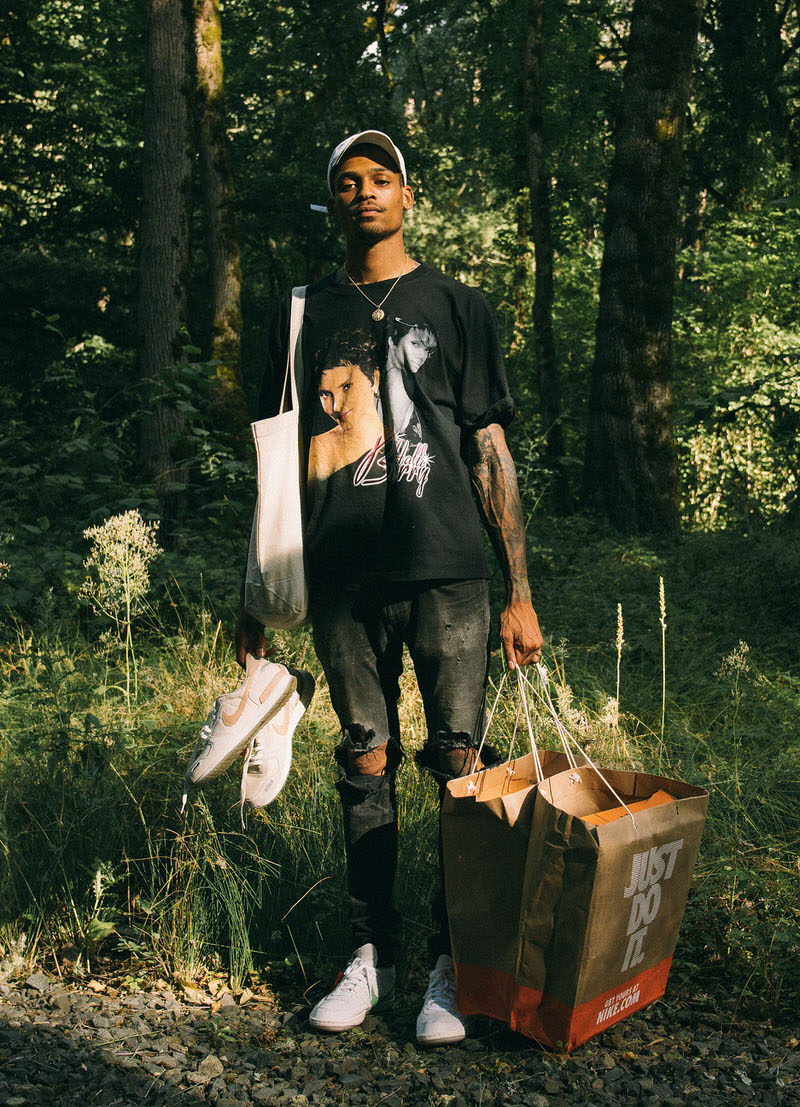 “This really feels like it’s for everybody,” Gaines told Nice Kicks about the collection and the Nike x Ju Working on Projects initiative. “What we’re going to see down the line are a lot more younger Chicago creatives. The only way we’re going to continue to get cool things is if we nurture the creatives.”

Living in the South Shore neighborhood following college was very limiting for Gaines. There weren’t many programs or resources for a young artist to develop and produce the endless amount of ideas in his mind. While not poor, he had to appreciate everything he received and make the most of it. The Game Worn concept stemmed from him having to make his school shoes last a bit longer. He would tell his peers that his well-worn Jordans were gifted by MJ himself right after the games. With a natural hustle and sharing Mike’s size 13, it wasn’t farfetched to believe he might be telling the truth.

After graduating from Northern Michigan University in 2015, he began working as a Brand Ambassador at Station 23, which had just opened in Chicago. While there, he began instituting his creative direction within the space to help bring a more authentic experience to consumers. While his time there was brief, the experience there awarded him friendships he still holds to this day and allowed him to see the impact he could have through his creative vision. He always wondered why there wasn’t a shoe specifically for creative and thought countless times of what the design would look like. He figured that since there were shoes for athletes of every sport, how could there not be one for those creating? 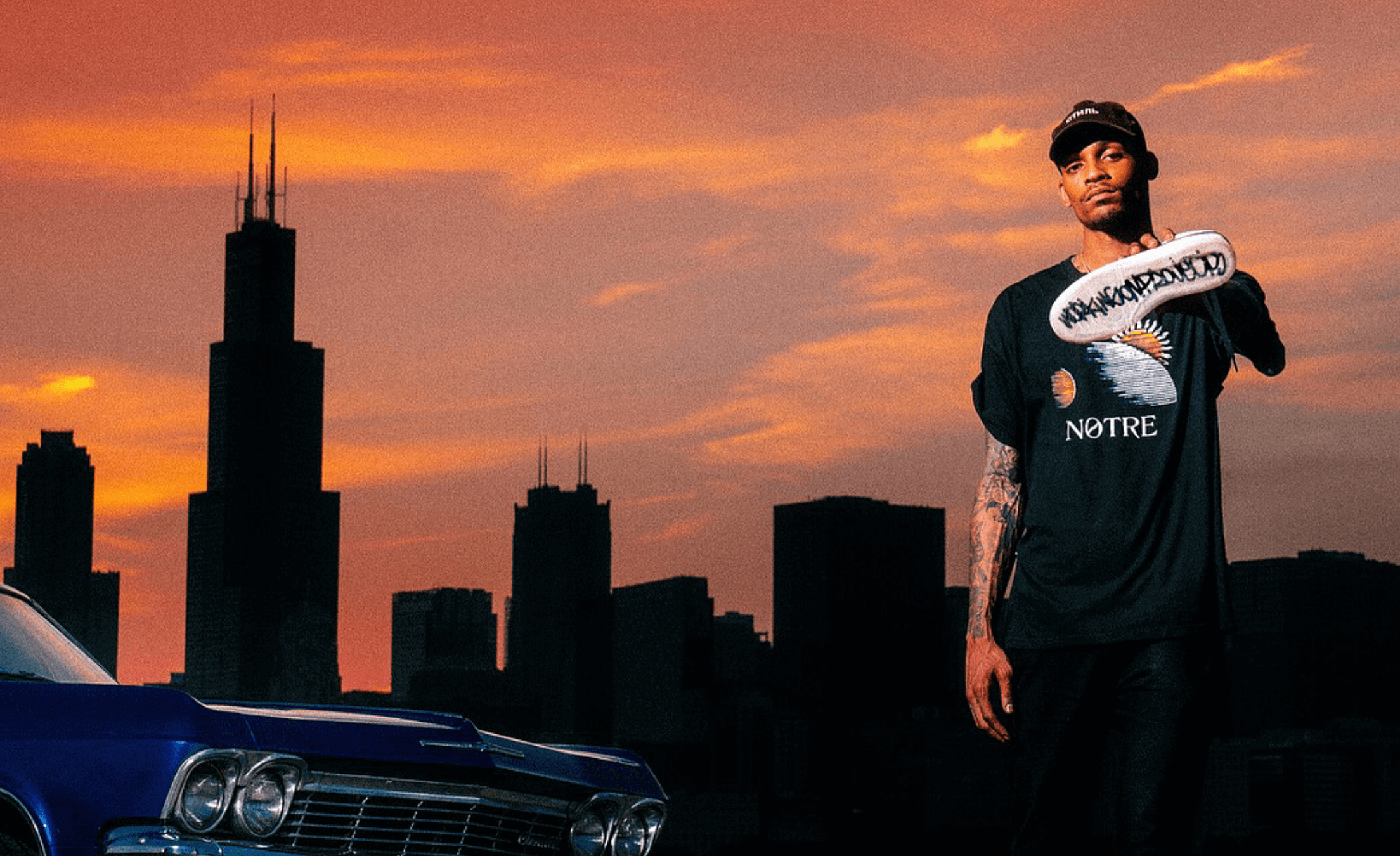 “I wanted to bring an idea to [Nike] to create the creative shoe,” said Gaines. “You can be an artist way longer than you can be an athlete. I can still just barely dunk but my element of creativity is at an all-time high. You can create up till your last days, so it only makes sense that we should market towards the creatives.”

He figured the only way to help make this dream a reality was to go straight to Nike. Not through sending drawings, or tagging their social accounts; they needed to see him and feel his energy. Everything from there would take care of itself, he thought. With no steady income coming in, he discussed his idea with his family. His mom, seeing how much he believed that this was part of his journey, gave her full support and agreed to take care of his dog while he chased his dream. His grandparents, firm believers in logic, felt it was too big a risk.

It was Valentines Day of 2016 and there weren’t any females rocking with Gaines and he was down to his last $100. With that not being enough for a one-way to Portland, he instead booked a direct flight to Colorado and spent two weeks hustling to get the funds needed to complete his destination to Beaverton. For two months, he slept on a friend’s couch and three to four times a week, made the seven-mile walk to Nike’s campus. He would spend up to five hours there each time, sitting in the cafeteria, creating for his portfolio and scheduling meetings to share his thoughts, opinions, and vision. A talking point always was the handed down all white Air Force 1s his friend gave him that Gaines turned into his personal canvas, painting outside the lines of the Swoosh.

While word began spreading on campus about Gaines, he wasn’t content on just being known on campus. He did have bills to pay and a vision to fund.

“I wanted dental benefits! I’m grown,” said Gaines. “I’m trying to get a consistent job on campus to support my creativity and buy art supplies. That was my job and vision. If I work as a PLM [Product Line Manager], I can save up enough money to buy canvasses and I can paint in my spare time to be able to work towards being the greatest artist of my generation. I prayed about it and thought that it would be how I could leverage that part of my life.” 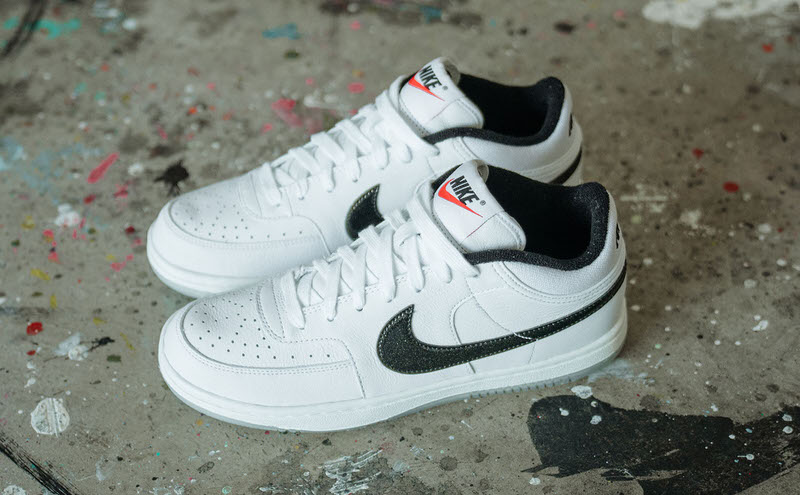 Having seen his work ethic and the conviction behind each idea he shared, Nike was sold on his vision of creating and utilizing a platform to reach back towards his community through the power of sport, art and creativity. He began working on the “Game Worn” collection and had to keep details about all that was coming for over a year. He made sure everything down to the smallest detail was authentic to him, even selecting Notre as the only retailer that would launch the collection because they were the only ones who traveled to the East Side to allow him to tell his story through their site’s blog.

“I’m just grateful that I can show my friends that when they get discouraged, they can look at me and see that it’s not that bad,” he says. “People don’t understand the things that I had to go through to get to this point. To be in the same category as Don, Virgil, Kanye and now me having a Nike shoe? It’s like WOW! I’m not famous. I didn’t have any celebrity co-signs. It’s just a grind.”

While gaining a new level of recognition, Gaines still remains that same kid from Yates. He still drinks the same coffee from McDonald’s every day, tries to answer as many DMs from those seeking advice and will rock the same shirt for consecutive days if he chooses to do so. Even with now positioning himself amongst the big-name Chicago creatives, he’s quicker to name people like Ben Edgar, Basil Evelyn and B Jack as the most influential in helping him stay the course and is never one not to give credit. Chicago artist, Theaster Gates, helped ignite the spark for Gaines wanting to create his own workshop for children after the artist invited him to one of his own years ago.

“I haven’t really had any moment to sit back and reflect because everything has been happening so fast,” Gaines says. “Being from Chicago, that popularity stuff is kind of fugazi because it makes you a target. I remember cats wouldn’t let me into their events and now I’m giving them my product.” 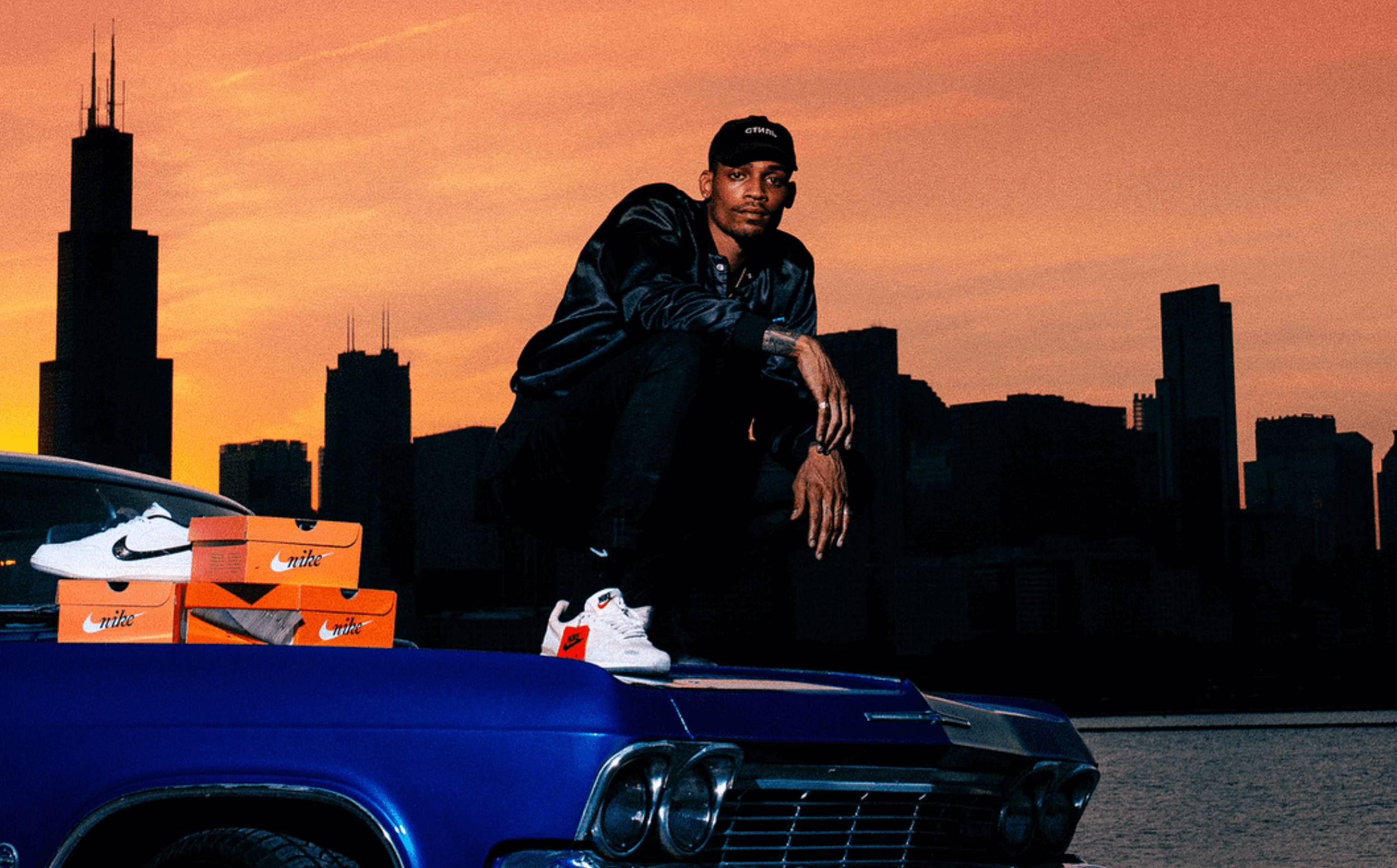 Chicago, while beautiful, is the most segregated city in the nation. There have been and are several like Gaines, who have the talent to scale beyond the boundaries of their circumstances. However, too many times that talent never receives the nurturing needed to blossom, falling victim to elements the city is disgracefully all too well known for. Gaines wants to help change that through his platform with Nike, showing kids that, like him, you don’t have to be an athlete or musician to create a path to be able to live their dreams.

This is only the start for Gaines. Several goals of his are scribbled down with empowering his community and being the resource to the next generation at the forefront. With all that he’s been able to accomplish thus far, it’s not farfetched to believe he will achieve that and anything else he puts his mind to as he advances through his career. It’s these thoughts that make for many sleepless nights for Gaines and those nights only provoke more ideas. He’s never been one who needed much rest anyway.

After all, there’s always work to do.

“People say they want this but they don’t even want to miss a meal,” Gaines says. “You can’t want it that bad if you still want to eat three times a day. I eat once a day and three cups of coffee. Eating just makes me tired. I’m trying to work.” 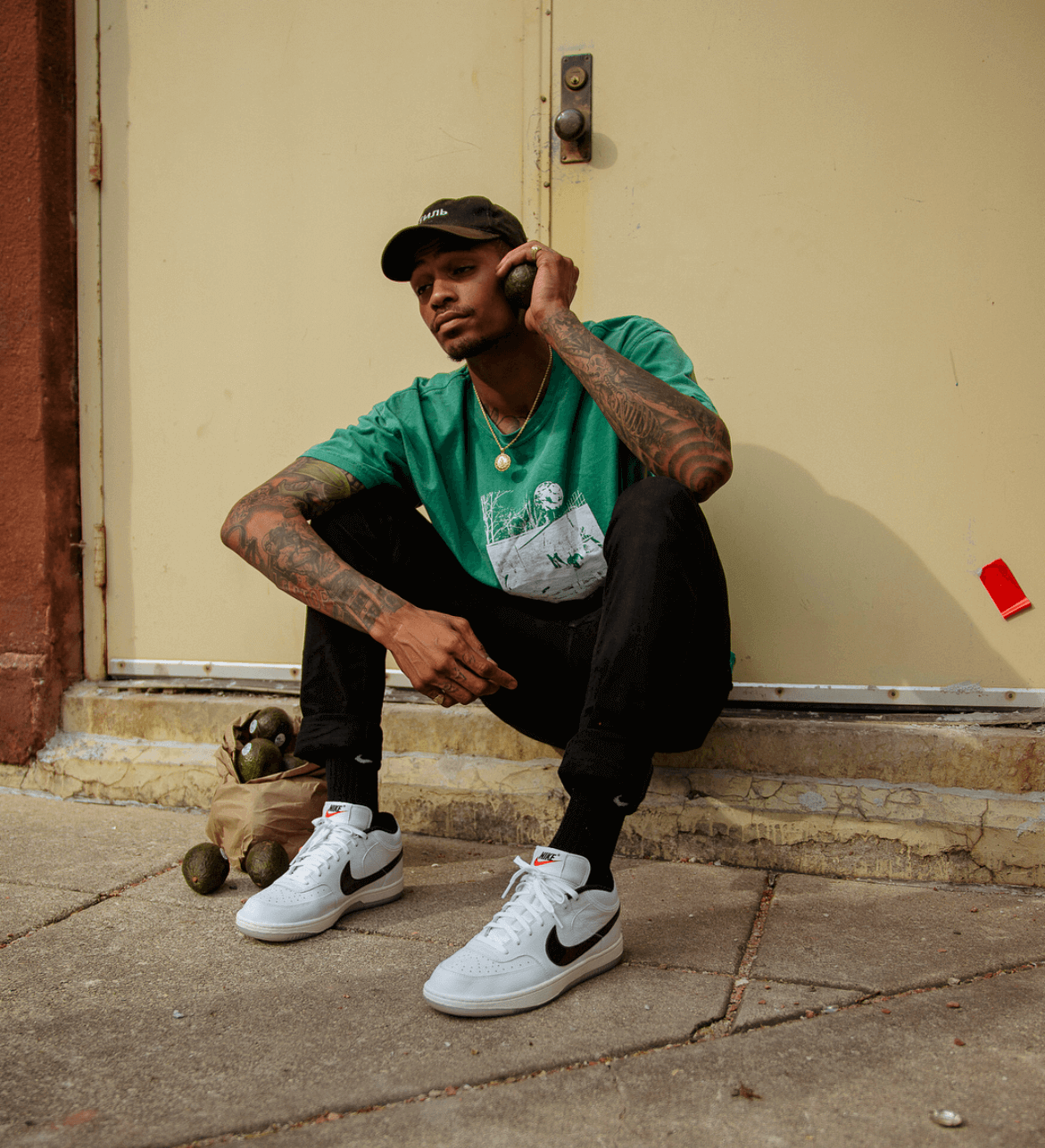