As the head designer of LeBron James’ signature line, Jason has directly influenced the direction of the entire basketball shoe category with his imagination.

What’s so special about Jason’s creations are the way they age. When a given shoe designed by Petrie releases they look and feel futuristic at the time, but 3-4 years later they look ‘normal’ or contemporary.

The Charlotte, NC native’s passion for everything sneakers is well documented, so let’s take a look at how Petrie became the captain of the LeBron James sneaker ship.

It’s funny how life can bring people full-circle sometimes – Jason started refining his sneaker design skills as an intern at Converse while attending N.C. State. The polarizing Converse All-Star He:01 was one of the first projects Jason worked on. They attempted (and failed) to rival Nike’s Air cushioning by emulating the tech with helium instead of air.

Converse taught Jason a lot about the ins-and-outs of the shoe industry. Mainly, that it’s about more than the raw drawing skills.

With greater skills in hand he grinded, uploading his designs to the OG of OGs by showcasing his sketch work on NikeTalk under the handle ALPHAPROJECT (an homage to Nike’s line of aggressive basketballs shoes) to get his ideas circulating.

His online posts worked, Fila noticed his work and brought him on to design basketball shoes internationally in Italy for two years.

But at Fila, Petrie unapologetically rocked with the Swoosh. In the end, his experiences with two different and credible brands couldn’t satisfy his hunger to work at Nike – as if his NikeTalk name wasn’t proof enough.

Around that time, he watched as a young LeBron James entertained sponsorship suiters from every brand under the sun and hoped The Chosen One would sign with Nike in 2003. As fate would have it Jason started his Nike journey in-toe with LBJ – but no one told him that he’d eventually be tied directly to LeBron.

The early years of Jason’s tenure with Nike were spent honing his skills under (then) head LeBron designer Ken Link on ‘Team LeBron.’ Jason was all-in on LeBron before he officially took over as “the man” due to the line’s history of high quality releases.

It didn’t take long for Petrie to start working with some of Nike Basketball’s biggest stars at the time on his own originally designed signature shoes.

Other notable Petrie designs before taking over the helm of Team LeBron include the:

LeBron James demanded that his shoes be the best available – both on and off the court – and he wouldn’t accept anything less. The Air Max LeBron 7 shattered expectations and instantly became one of the best footwear options on the market.

With a blend of familiar elements (ie. patent leather around the mudguard like the AJ 11) and new technology (Flywire), the 7 offered something intriguing for fans young and old. 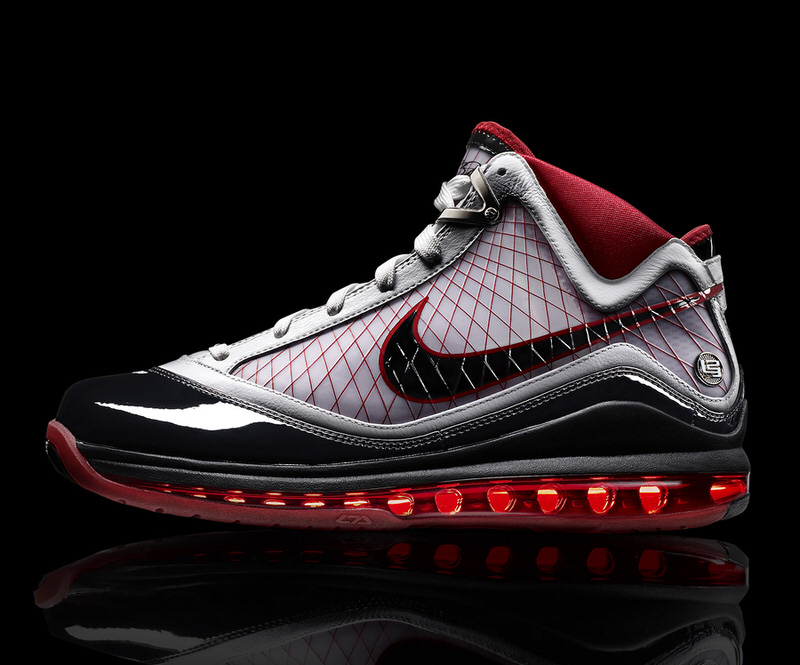 From a performance standpoint Jason displayed his love for bold ’90s design by substituting Zoom Air (used on the LBJ 1-6) for Full-Length Air Max akin to the Nike Air Max Uptempo ’97, making the 7 plush and well cushioned.

The James/Petrie connection on the 7 proved that Nike’s commitment to innovation and excellence was in safe hands.

With each and every LeBron creation, Jason brought to life the shoes and became increasingly more ambitious withe each effort.

Elements like Hyperposite (LBJ 11), Battleknit (LBJ 15) and Hex Zoom (LBJ 12) afford Petrie the opportunity to keep pushing the boundaries for what a basketball shoe could, or should, look like.

This is apparent in the line’s most recent entries like the LeBron 15 and 16. Texture, shape and materials were all cranked up to an eleven on a ten point scale. The design of both shoes not only serve practical purposes, but make onlookers question what they’re seeing.

Design should be useful and thought provoking, engaging and approachable. It’s safe to that Jason Petrie has honored each of those principles mightily.

His work has helped shape the basketball landscape for the better and we can’t wait to see what he delivers in the future.

Stay tuned to Nice Kicks for more designer profiles in the future!