Two years ago, during one of the most trying periods in modern American history, Colin Kaepernick became the most controversial black man in America. It began with a series of peaceful protests when the San Francisco 49ers quarterback sat for the national anthem during two preseason games. For the fourth and final preseason game that season, Kaepernick famously took a knee. He was joined by teammate Eric Reid.

Kaepernick soon after explained his noble actions. He very clearly stated that his aim was to bring awareness to the marginalization of black people in America, the injustices they face, and the unarmed African-American men who were being shot and killed by the police with no retribution.

“I am not going to stand up to show pride in a flag for a country that oppresses black people and people of color,” Kaepernick stated. “To me, this is bigger than football and it would be selfish on my part to look the other way. There are bodies in the street and people getting paid leave and getting away with murder.”

The series of events that followed, no one truly expected. NFL players from other teams and even athletes in a variety of sports began to follow his lead, hoping to bring awareness to police killings of unarmed black men. An alternate narrative steered by Colin’s detractors soon began to shift public opinion. He was villainized as disrespecting the flag, his country, and the many men and women in the armed forces who bravely risk their lives to keep it safe.

His protest became a political conversation instead of a civil rights plead. And Kaepernick, after opting out of his Niners contract in 2017 to become a free agent, wouldn’t be signed by another NFL team. He is still without work in the NFL.

Now, more than two years since that first kneel — and subsequent stages of public hiatus — Colin’s reemergence on the global stage through Nike’s 30th anniversary “Just Do It” campaign is almost as controversial as his initial protest. Quickly and expectedly, Colin is again the most talked about and divisive black man in America. It’s a space he’s grown familiar with. And, to his credit, one he’s learned to thrive within.

Nike, too, is no stranger to global controversy. Throughout the decades, many of their most successful athletes have been the most disruptive. They stuck by Tiger Woods during his brand tarnishing infidelity scandal. They revived Michael Vick’s endorsement deal after he served time in prison for animal cruelty, due to his involvement in a dogfighting ring. And of course, there was Lance Armstrong, whom Nike eventually divested from after his admission of using performance-enhancing drugs.

Before Nike set a course to end its relationship with Armstrong and his Livestrong brand in 2013, it was a partnership marked by great success. Nike would manufacture sneakers, apparel, and accessories for Livestrong as its largest corporate backer. And while the more tangible items served as the main course, the Livestrong rubber bracelet became a cultural phenomenon all on its own. 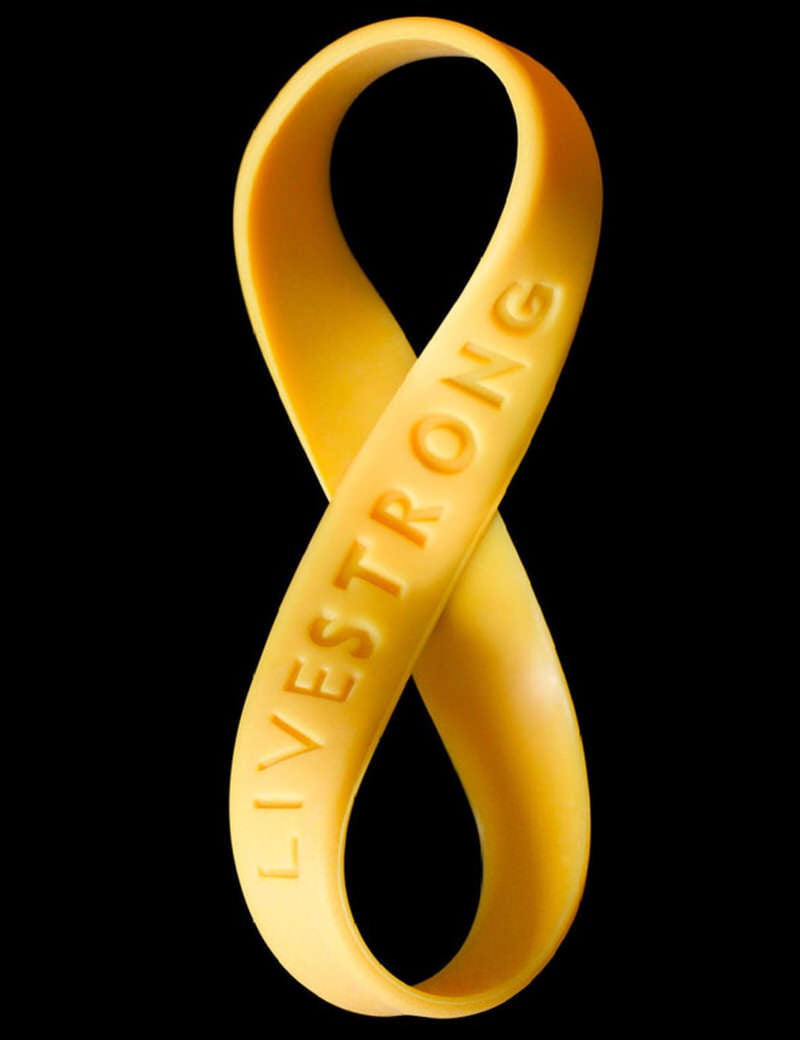 Nike and Livestrong sold over 87 million yellow rubber bracelets in their fight to bring awareness and provide support to cancer patients. At the cost of just $1 dollar, the bright yellow bracelet allowed consumers to become part of something bigger than themselves — part of the change and hopefully, one day, the solution.

With proceeds from the ubiquitous wristwear, Livestrong, by way of Nike, not only thrived fiscally but helped unite the cancer community that Armstrong was part of when he was diagnosed with testicular cancer in 1996. The bracelet grew into something neither expected; it became a cultural signifier, a symbol of togetherness, perseverance, and our collective ability to overcome life’s seemingly insurmountable obstacles.

For many people, black and otherwise, Colin’s sacrifice is as great an accomplishment as Lance overcoming cancer and subsequently winning his sixth Tour de France. Kaepernick’s reported Nike collection could, in part, act as the new Livestrong bracelet, bringing togetherness to a nation at odds. Although detractors of Kaepernick have now become protesters of Nike (including President Trump) by proxy, both still appear to thrive in the midst of chaos.

Since revealing Kaepernick as the lead athlete in its aforementioned “Just Do It” campaign, Nike has seen millions in publicity value. When considering their target demographic, people between ages 18 to 34, Kaepernick’s ad has been met with a more than favorable response. It’s not all positive, though. A truth Nike all but expected.

Kaepernick would appear to be the mirror opposite of, say, LeBron James, a vocal leader in the black community yet not nearly as divisive as Colin. But Nike didn’t become Nike by sidestepping controversy. Calculated risks, by in large, make them the most valuable sportswear company in the world. Yet, truth be told, Colin isn’t much of a risk at all; he’s actually really good business, as time has proven.

The commercial, which Nike premiered earlier this week before its national television debut later tonight, is narrated by Kaepernick. The inspirational clip features a wealth of empowering sports stories, including those of LeBron James, Serena Williams, and Seattle Seahawks starting linebacker Shaquem Griffin. Kaepernick appears near the ad’s crescendo, closing the statement piece with his signature afro paired with a calming tan trench coat. A quick transition cuts to a city street in the dark of night, lit up by passing cars and images of youth athletes reflecting off skyscrapers. The clip is punctuated with the words, “It’s only crazy until you do it. Just do it.”

The contrast in Nike airing “Dream Crazy” during the NFL season opener parallels their brand mantra. To greater effect, it proves why Kaepernick’s signature collection could have the same impact as Livestrong. Whether it be through a statement, theme, or something similar to a Livestrong bracelet or another towering accessory, the Nike Fuelband, Kaepernick’s cause is a rallying cry ripe for support. As Lance’s was years ago.

Much like how Nike helped to further cancer research and bring hope to a community of survivors through the Livestrong band, both through pure cash donations and in providing a symbol of unity through that simple rubberized wristband, here’s to hoping that Kaepernick and the brand will build upon their message of equality, and put forth a plan of community activations from proceeds from the inevitable Kaepernick-backed product capsules.

There’s a crystalized complexity in Nike’s public championing of the NFL’s assumed nemesis. By the numbers, though, the league has far more naysayers than Nike and Kaepernick. Many of whom are African-Americans, which in turn places them squarely on Team Kaep. Ready and willing to rally behind a cause that places an emphasis on their civil liberties and equality, Nike may be in their most opportunistic cultural position since Livestrong.

Even as the most controversial black figure in America today, Colin is the right man for this job.

Kaepernick currently wields the same sword Muhammad Ali, Bill Russell, and Kareem Abdul Jabbar once cut with. And while there can certainly be a negative connotation when comparing what Kaepernick can do to what Armstrong did before his fall from grace, there’s no scandal in fighting for equal rights, sacrificing oneself for the good of many, and using your platform to affect change. Colin himself may not be untouchable. But his cause, his cause may be. 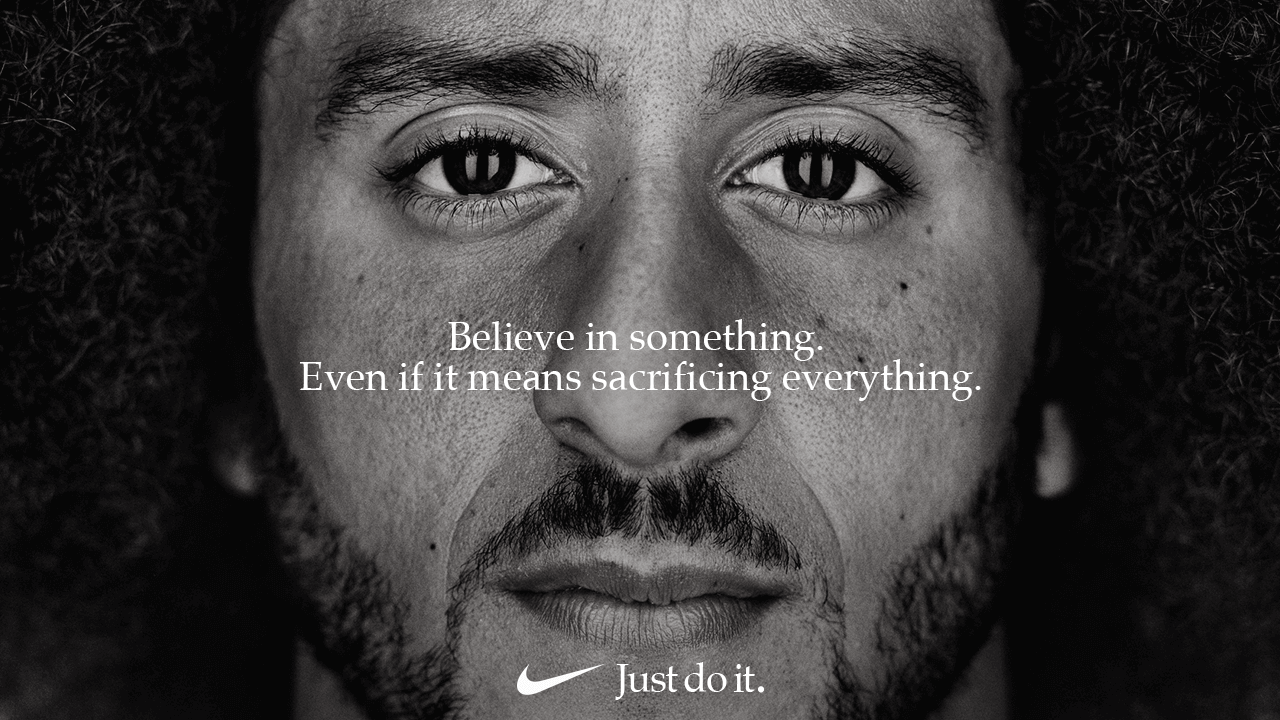