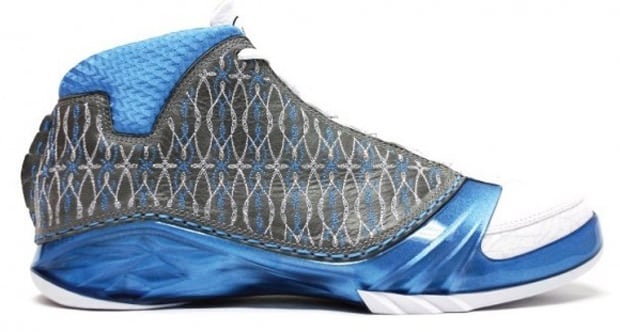 The Air Jordan XX3 (Jordan 23) was released like no other model of?? Air Jordans . The first color was released to only 23 stores, the Top 23, and each of those stores received only 23 pairs. Keeping with the “23” theme, the shoes were sold for $230.

Though the Jordan XX3 release was not the most limited (“Thunder” Jordan 4 limited to 500 pairs & UNDFTD Jordan 4 limited to 72 pairs), the Jordan XX3 drew lineups and campouts at every store except for those who did lotteries.?? In addition to the 529 pairs (23 stores x 23 pairs) released in the US, there were another 529 pairs released outside of the US.?? Canada had the most stores out of any international location with 5 stores.
A few pairs leaked onto eBay prior to the release – most of which from Toronto.?? The shoes sold for above $1,000 instantly with some auctions closing for more than $2,000.

The twenty-third year for the Air Jordan series was looked forward to by Jordan Brand executives as well as by Jordan heads. From his high school days until his retirement, of course minus a few months wearing #45 and #7 that he sported in the Olympics. Jordan has pretty much become synonymous with the two digit number. He has made this prime number a number that stands for excellence and greatness.
The “Top 23” stores are listed below: