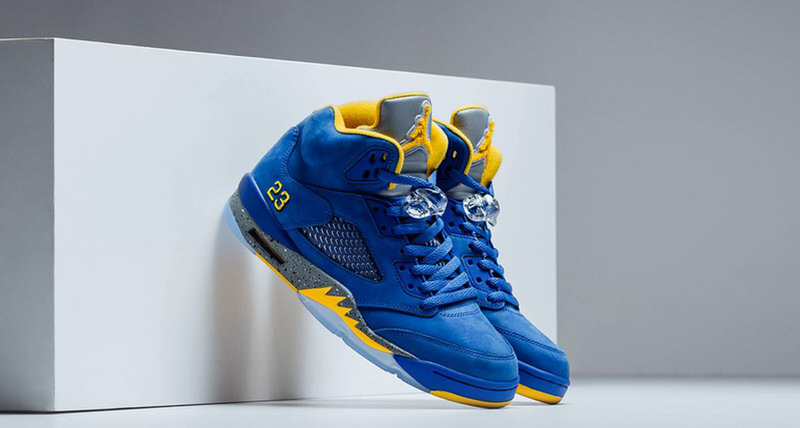 We all know the story of Michael Jordan being cut from his high school varsity team when he was just an underdeveloped sophomore. We also know that devastating blow was what initially willed Jordan to become the greatest basketball player of all time. Both those defining moments took place at Laney High School in Wilmington, North Carolina.

Back in 2000, Jordan Brand honored the school of MJ’s prep upstart with an Air Jordan 5. The shoe would go on to become one of the best non-OG Air Jordan 5s, and retro for the first time in 2013. Now a new chapter for the Laney series has arrived.

Dubbed the Air Jordan 5+ JSP, this iteration takes Laney’s Varsity Royal and Varsity Maize colorways and offers the former as the primary in contrast to the original design. Chenille detailing refines the Jumpman logo at the tongue while a speckled grey midsole also adds newness to the budding “Laney” 5s.

Jordan Brand has not yet confirmed the Air Jordan 5+ JSP but the shoe is expected to release on January 19, 2019.

Update 1/22: Scheduled to release this weekend at select retailers including Feature, grab the Air Jordan 5 “Laney” this Saturday, January 26.