Decades ago, A Bathing Ape put its footprint all over sneaker culture with the Bapesta. An homage to the Air Force 1, it proved polarizing due to its similarities but iconic due to its imagination and endorsement. In 2012, the brand built back in the day by Nigo launched AAPE – a new line informed by the past of BAPE but made for a modern market with a contemporary lens.

Unveiled just a couple of days ago at Shanghai Sneaker Con, AAPE has stepped into the footwear space. At the multi-day sneaker event in China, the brand unveiled the AAPE+ line that will release in AAPE stores on May 25th with a third model leading the charge for AAPE on June 8th. All three models will be available at the AAPE stores located in the US, Japan, China, Hong Kong, Macau, and online at ITeshop.

Two models will lead the AAPE+ footwear line at the debut – the AAPE+ Awakening EX and the AAPE+ Potential SS.

The AAPE+ Awakening EX (EX is short for Element X) is inspired by machine block movement. The upper features a sock-like fit with a bionic structure of the sole mimics the tension between different segments of the human sole. The Awakening EX is available in three colors and will retail for HKD $1,199 (approx $155 USD).

The AAPE+ Potential SS (SS is short for Shadow Spirit) is inspired by the Japanese martial art of kendo and the lacing systems of motorcycle boots. This model debuts in black, white, and military olive colors and will retail for HKD $999 (approx $127 USD).

The AAPE Dimension is a retro style runner that features a multi-paneled upper that pops with luxe layering and 3M detailing, made wide in stature and branded beautifully on the tongue and toe box. Rugged soles play more to city pavement than the track, offering a fast but tough take on the trend that’s taking over fashion. The AAPE Dimension will release June 8th for HKD $1,299 (approx $165 USD). 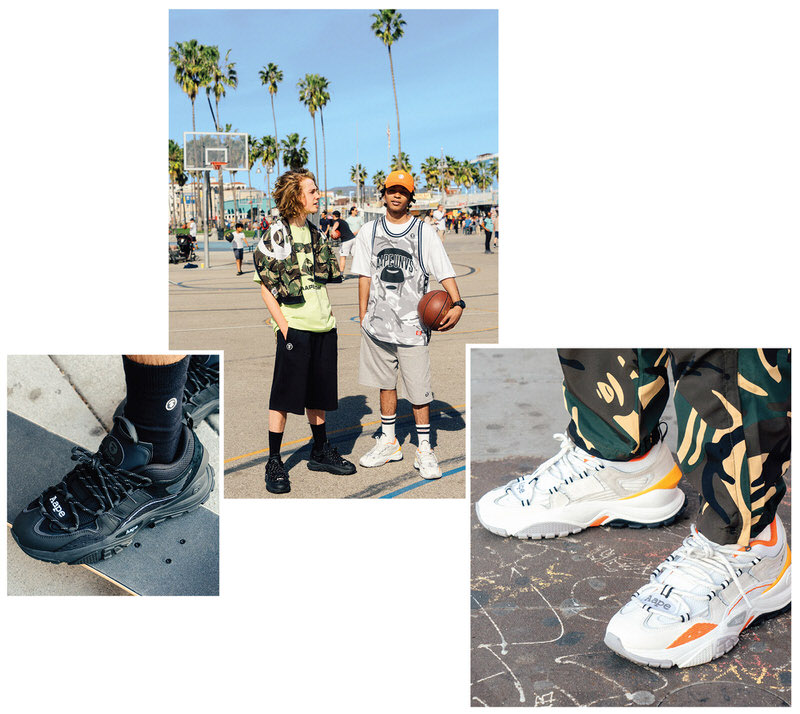