After hooping in adidas for his first three years in the league and then playing in whatever he wanted as a sneaker free agent, Tim Hardaway Jr. signed a deal with Jordan Brand this past offseason. Interestingly enough, Hardaway Jr. was able to land a contract with Brand Jordan because of his father, former NBA All-Star guard Tim Hardaway.

The elder Hardaway talked to Michael Jordan about getting his son a contract deal and His Airness followed through.

SLAM: How did you link up with Jordan Brand? Did they reach out to you?

Tim Hardaway Jr: It was more of a mutual thing with Jordan Brand. My pops [Tim Hardaway] was a big part of it. I was with adidas for all of college and for my first three years [in the League], but I played my fourth season in the NBA as a sneaker free agent. I just loved playing in Jordans and Kobe ADs.

They just felt comfortable. I just told my pops, ‘Hey, I love these shoes, even though they’re lows.’ My pops doesn’t like me playing in lows. I played in the shoes in the playoffs, when we played against the Wizards.

After the season, I was talking to my agent [about brands] and told him, ‘Hey, what’s up with Jordan? I don’t care what they give me, it’s just the honor to be able to play for the Jumpman and go out there and represent him in a great way.’ That was the pitch I gave them. And then my pops tried to talk to Jordan personally.

So in large part because of his father, Hardaway Jr. will mainly be rocking the Air Jordan XXXII this season. 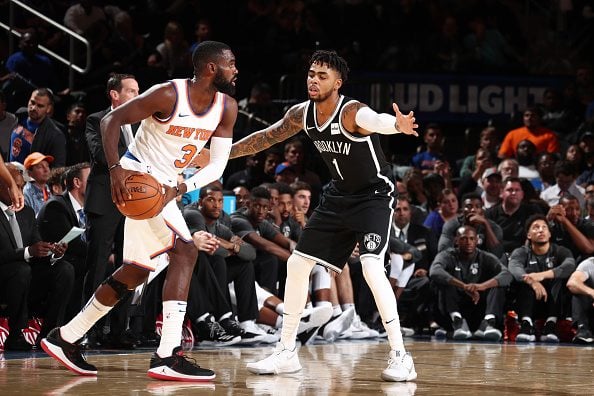 Where To Buy The Air Jordan 1 Low “True Blue”