When Yeezy Season arrives we all go through a range of emotions. Everyone begins with excitement for new sneakers, then the reality is most of us leave the experience frustrated. From leaving one star ratings and awful reviews on the adidas Confirmed app to destroying every adidas staff member’s mentions on Twitter, it’s safe to say the people are fed up with the limited quantity of Yeezys being produced.

It’s one thing for the consumers to be outraged, but it’s another when the owner of a popular retailer decides he’s frustrated and speaks up in public. Erik Fagerlind, CFO and CEO of Sneakersnstuff, took to Instagram this morning to pen an open letter challenging adidas to do better:

It’s yeezy season… I think we had more simultaneous visitors than @adidasoriginals global production of the Yeezy 350. I see a lot of people angry, frustrated and sad. And I share their frustration.
We do all that we can for a fair and smooth release – but since we get nowhere near the qty to cover even 1% of the demand, people still misstrust us.

I think there is a lesson to be learned here @adidasoriginals. If you continue to undercut the market this hard, people will get tired of trying.
I know it is not likely that you will sell us 50000 pairs (I’m game if you are…). But you have to level the field here. Disrupting the marketplace with chaos on release day feels very 2015, and you are the “brand of the future”.

I am in Herzo monday – happy to share all info, insight, feedback with anybody who cares #yeezy

In addition to the challenge, Erik made his website analytics public showing 5.5 Million requests for the Yeezy Boost 350 V2 on Sneakersnstuff’s website in only 24 hours. It’s clear that Kanye West and adidas have the demand they want. 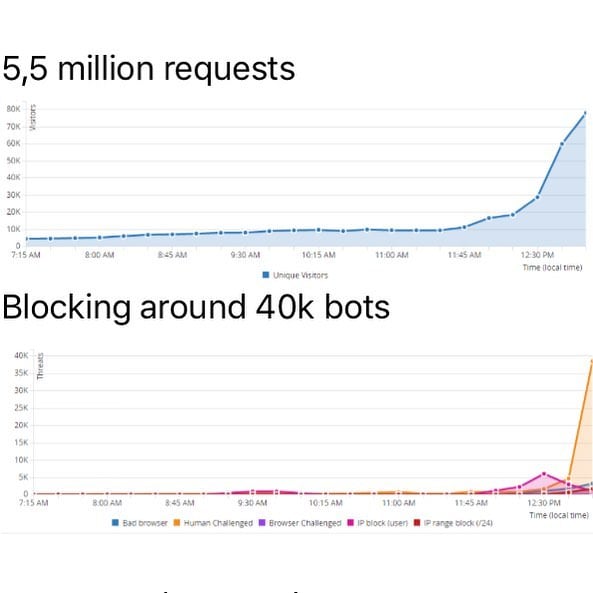 Will adidas take the feedback and crank up the production of Yeezys? Only time will tell. For now, we’re stuck waiting for our turn to get a pair of Kanye’s new sneakers.