In 2017, everyone with an aux cord is a DJ, everyone with an IG is a model and everyone with a pair is a sneakerhead. Fortunately for Orange Calderon, she’s been in the mix for music, style and sneakers since way back. Showing more range than James Harden and beating the boys at their own game, the Houston native who now resides in LA and tours the world sports a mix of streetwear and athleisure that’s as fashionable as Fairfax but as organic as a farmer’s market.

Making the most of her Active Athlete upbringing in the H but also the labors of leg day, what’s Orange wearing when she’s backstage at the Fader Fort, on stage at TAO or tearing up the treadmill? We caught up with her to hear it all in the latest My 5. 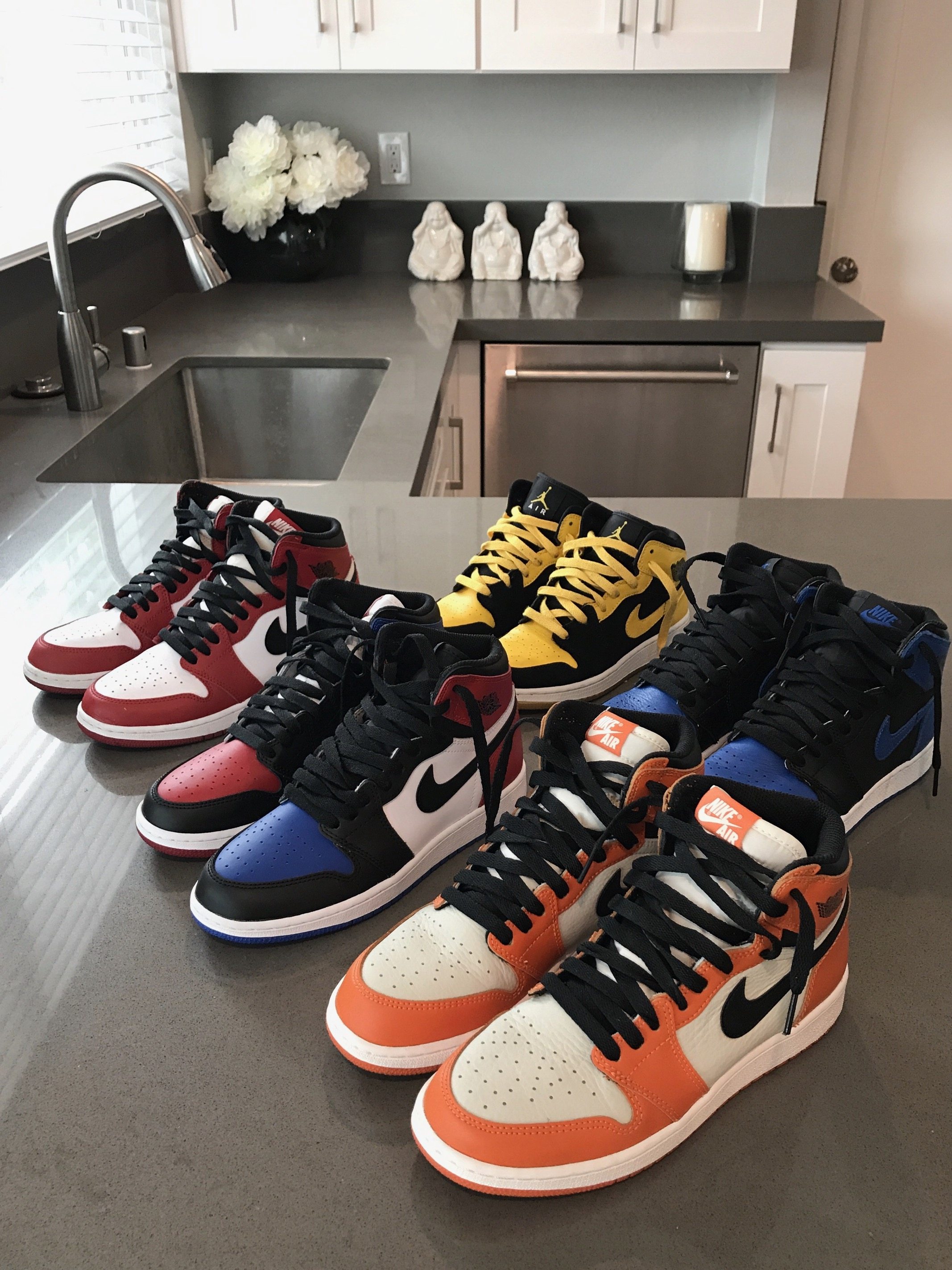 The sneaker culture back then really wasn’t a girl’s game at all – it was just boys. I was very much a tomboy, but I really just wanted to be fresher than the boys.

I rotate my Jordan 1s pretty heavily – that’s my top shoe. The Reverse Shattered Backboards are probably my favorite just because they’re orange. [Laughs]  The New Love 1s I have are the pair from back in ’07 when I was in high school. I used to work at Footaction so I always was the plug and I always had everything I ever wanted. The sneaker culture back then really wasn’t a girl’s game at all, it was just boys. But I was very much a tomboy, but I really just wanted to be fresher than the boys. Having the Footaction plug helped but I would still go out to New York just to get stuff that was dope. I think it’s safe to say that back in those days I was definitely known for my sneaker collection. It stood out and got a lot of respect in the way that I wanted to be respected.

Back in high school, I probably wore my New Love 1s with some black Dickies and a wife beater [Laughs]. My clothes were fitted but I was wearing tank tops, I was trying to be on some Aaliyah shit. The Jordan 1s have always been a favorite for me because my foot is so small. The bulkier shoes like Foamposites make my foot look even smaller and rounder, so the leanness of the Air Jordan 1s and the way they can be laced make my feet look cute. They just work with my feet.

It’s harder to get my hands on OG anything now. I can’t front, the kid I was in high school was more of my hypebeast phase and I was hunting things down and had relationships in New York even when I wasn’t living there. I’m not actively seeking out stuff like that anymore, but when they come across I take my shot. Because of that, I’ll take the retros just like I’d take the OGs because I’m actually going to wear my shoes. I used to be a lot more careful, like I take care of my shoes and keep them in the boxes — I have a ton of sneakers that are like ten or 12 years old — but now I really wear my shoes. 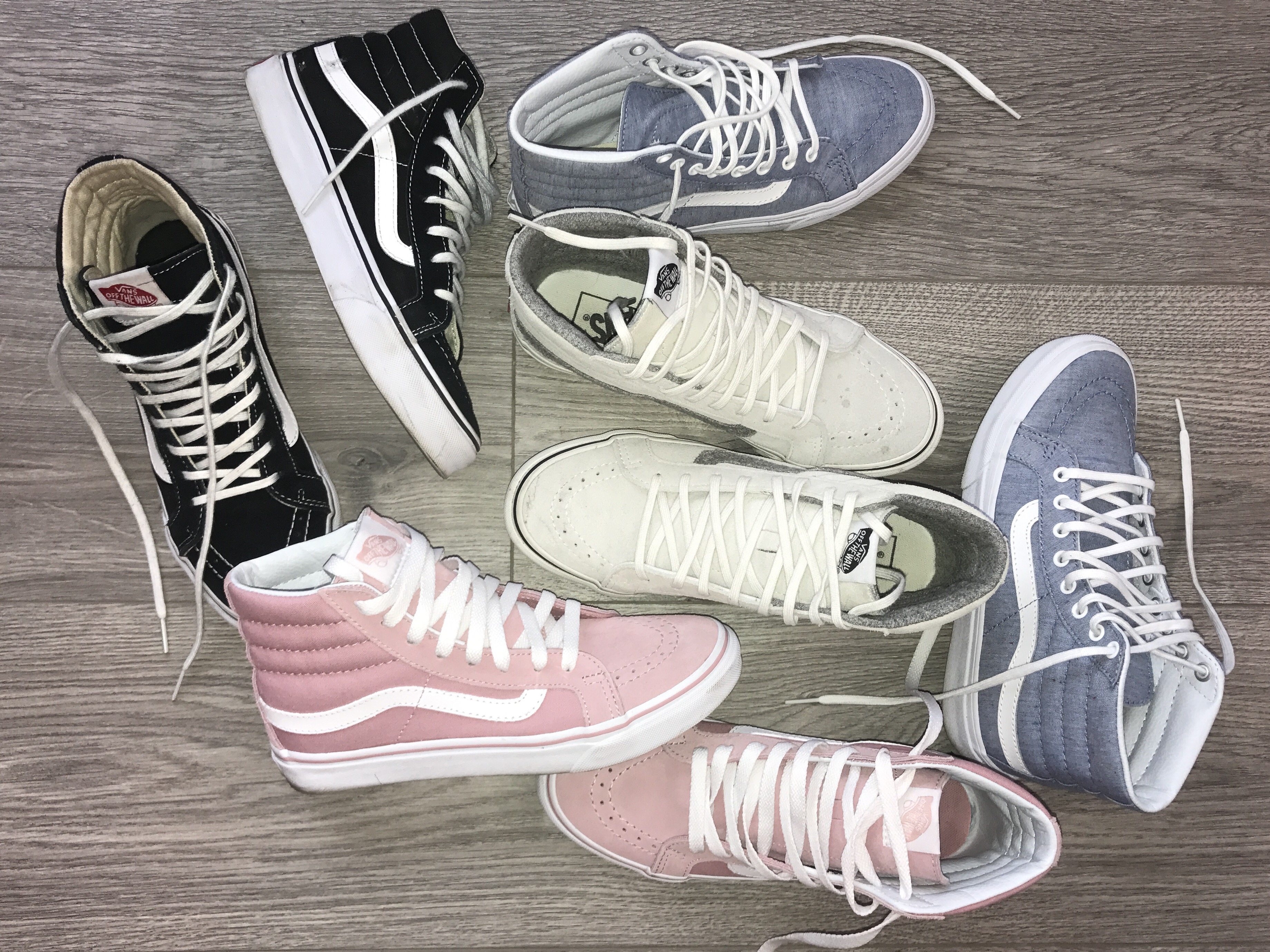 I wear the Sk8-Hi more than the Old Skools. I think the difference is I still look at a high top sneaker as more of a sneaker than a low top sneaker. It’s the same for Air Force 1s and Chucks. To me the real shoe is the high top and you have to be more stylish to pull it off. In general low top sneakers are easier and style has to have challenge. Old Skools are awesome, but I have way more Sk8-His because I think they’re flyer. When you do them right I think they look better.

I definitely love the classic Black/White because that’s the kick around shoe. I’m not really the dirty sneaker type probably because I’m from Houston. You’re gonna get clowned for having a dirty sneaker there. Even as my style has evolved, dirty sneakers just make me cringe even when people pull it off! I just couldn’t do it, I couldn’t wear like a beat Air Force 1 Low. However, I can do that with a beat up Sk8-Hi. Sometimes I lace them up and they’re not crispy and it bugs me a little bit, but that’s what this shoe is for. Put ’em on, run through the grass and be not too concerned with still being stylish. With the Sk8-Hi I can really get shit done. 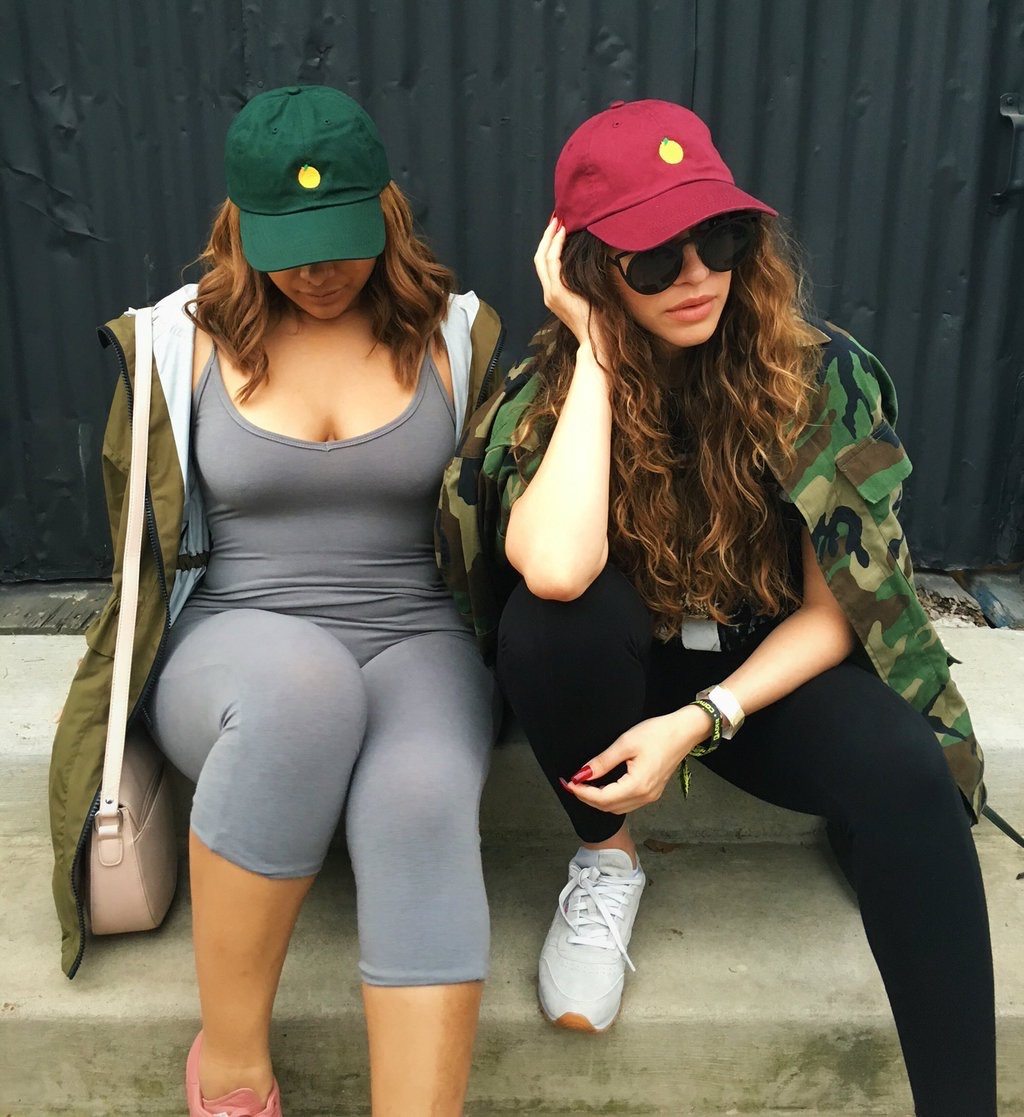 As a DJ, Kendrick can really do no wrong. He just dropped the ‘Mask Off Remix’ and off the album I can play anything.

I wore those to death, I can’t even wear those anymore. Those are really one of my favorites though. When I was moving I shed a tear because I had to let those go. I even hit Reebok back to see if they had anymore because I wore them all the time just to support the homies and then they accidentally became my favorite. I left the original khaki laces in them and they were just so clean. The silhouette was narrow which I like and they went with everything. I think their last real run was Fader Fort at SXSW because of all the dust and dirt. I walked in and everyone was like, Woah, are those the Kendrick joints?! It was a plus that everyone liked them because they were limited, but I liked them because they were cute, cozy and they supported the homies.

The TDE camp has always been hustling and working, they’ve looked out for me and put me onto dope projects like curating playlists and putting me in touch with the BET Awards which they recommended me for. I’ve offered my opinion on dope producers and artists, it’s just one of those friendships where discussions turn into work. It’s a friendship more than anyone else, but they’re great.

As a DJ, Kendrick can really do no wrong. He just dropped the ‘Mask Off Remix’ and off the album I can play anything. It can be the height of the club and I can put on ‘Loyalty’ and people will get hype as if it’s a high energy record. That’s usually the opposite with a downtempo record, but it’s vibey and girls want to sing along with the Rhianna part. ‘Love’ is also a big one, too. I’d say right now though, ‘Element’ is the one that gets the illest reaction in the club. People are just ready for that [mimics the bass], people just love Kendrick. 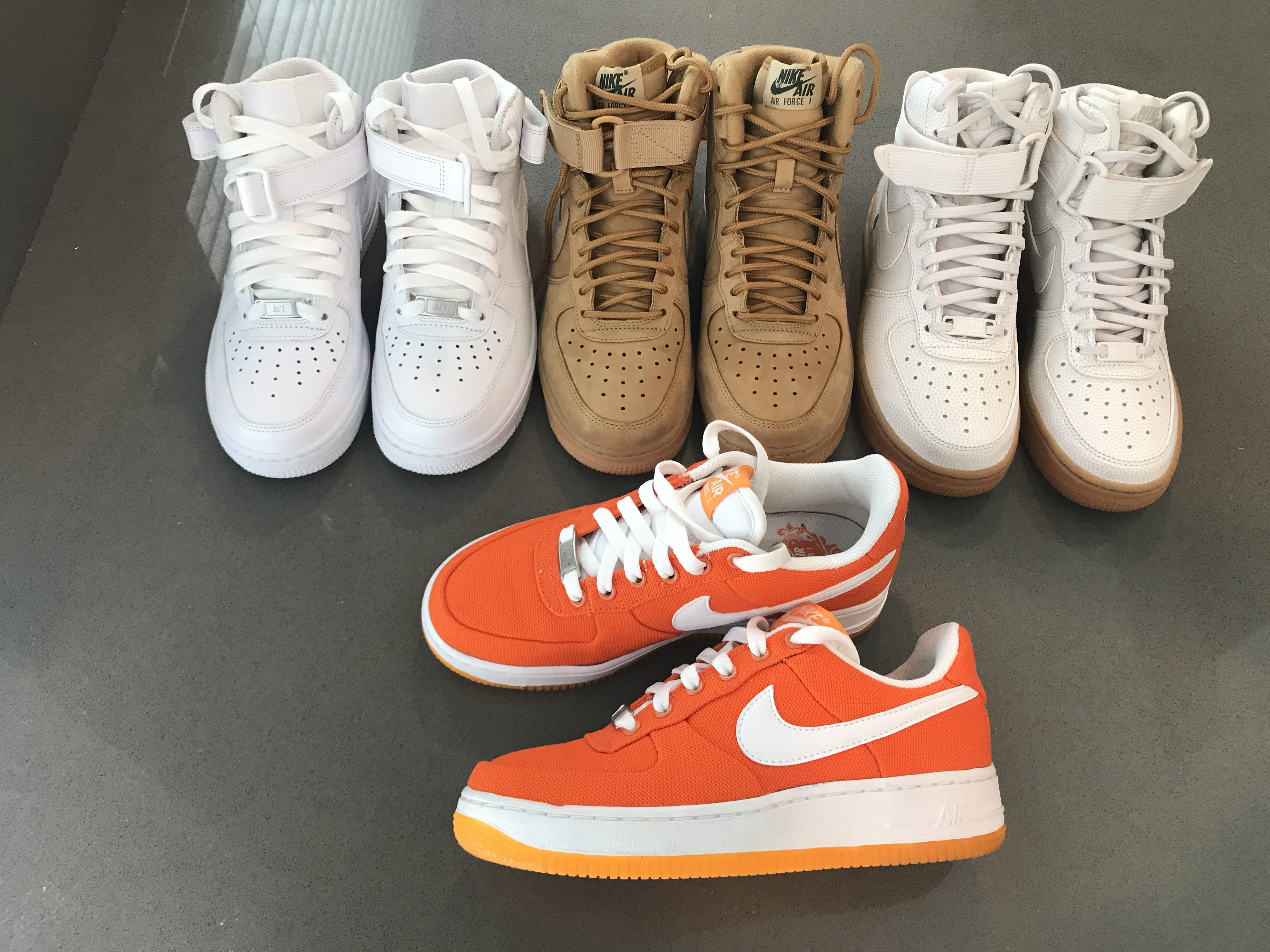 I got so many compliments on that shoe [Orange Canvas AF1 low] with everybody stopping like, Where the fuck did you get those?

I’ve always been a fan of the Air Force 1. Between Bo Jacksons and Air Force 1s, those are my first loves. I didn’t really wear low tops at all in high school because I needed the velcro and I needed the strap. But, the Air Force 1 Low in orange canvas? The photo that you guys posted was the first time I’d worn those since 2008. I got so many compliments on that shoe with everybody stopping like, Where the fuck did you get those? They don’t crease because of the canvas and they’re just loud and amazing.

I still love the classic white joints and the Flax highs. I’m torn on making iDs. I made a couple pairs of Air Max iDs back in the day, but to me part of the collecting part was getting the illest stuff that was released. I have a design background so I appreciate executing an idea at the iD studio, but I think I’d wait until it’s official with Nike. I’ve got asked a lot about iD pairs I’ve done, but since high school I haven’t really gone back and done that. I like to collect. I’m definitely a Nike girl. 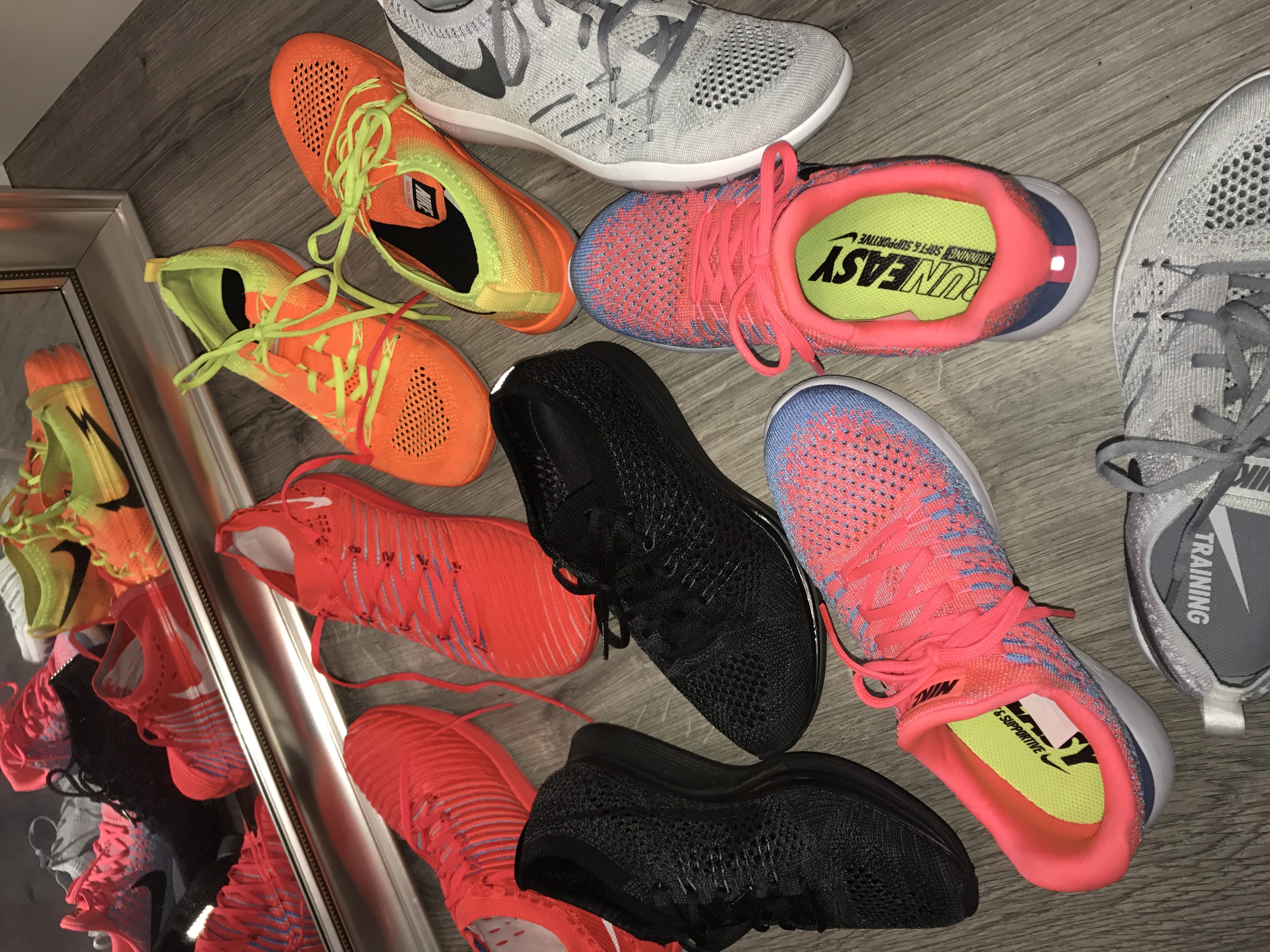 I work out a lot. For leg day I go in a pair of Chucks or Vans because the flat sole helps for the form of lifting so I still bring those in my bag so I can lift heavy. For running or cardio — my favorite things — I’m in all different types of Nikes.

I work out a lot. For leg day I go in a pair of Chucks or Vans because the flat sole helps for the form of lifting so I still bring those in my bag so I can lift heavy. For running or cardio — my favorite things — I’m in all different types of Nikes. I’ve always been very competitive and athletic and my roommate is a trainer. Because of her, I’m very cognizant of building up so I lift for sport. I’m definitely in there trying to leg press like 280 or 300 lbs. It’s a sport for sure. We’re in there for like two hours a day, it’s not a game [Laughs]. We’re training like we’re going to use it somewhere, but at the end of the day it’s still to look good in your clothes and feel strong and agile. It’s for sure an active part of my life.

As for the Nikes, the orange ones are my favorite. I started an On the Way series for my travels. I wear a lot of active wear in case I want to run over to the gym so I have all the colors to still be on point but still be prepared to get it in. More often than not I’m in athlesiure because 90% of the time I’m traveling for work, so what’s more important: the few people you’ll see in the airport or being able to be cozy and cross your legs on a four hour flight? Because of that I’m always in a pair of tights or tapered drawstring pants, sports bra, and some type of tee or a windbreaker jacket. I’ll still get the fit off but be cozy as fuck.