Jared Zych was not your average kid. Growing up, he would day dream about sneakers and about one day becoming a sneaker designer. He would sketch his favorite shoes – The Nike Air Flightposite, adidas Kobe, AND1 Tai Chi and send his designs off to the brands. He even wrote a letter at age 9 to Tinker Hatfield detailing his love of shoes and design and waited patiently for a response that never came. One day, a yellow envelope arrived in the mail from AND1 and Jared received the recognition he so desired – that someone actually did receive his designs and he got the encouragement to go on and continue to pursue his dreams.

His love for sneakers continued on throughout elementary school to middle school and when the “Playoff” 12s released, he begged his dad to take him to the mall. He knew it might be a stretch for him to get the shoes, but he hoped and prayed the whole way there that his dad would be willing to grace his feet with the shoes he so coveted. After having his foot measured, the sales associate came back with the shoes from the back and they looked a little bit different. This pair had silver eyelets on them and he told them, “Oh no, these aren’t the ones, I want those ones,” and the associate said, “No man, those are the Grade School 12s. You are now an adult size.” As any sneaker head knows, that jump in size meant a huge leap in price and when his dad found out, there was no way he was going home with those shoes.

Missing out on that pair further strengthened Jared’s love of shoes and he went on to continue to sketch more and dream about one day having a big sneaker collection. As a way to make money to build his collection, Jared approached local businesses with his dad to see if they needed logo tees. He then created heat transfers and pressed the shirts in his parents’ basement.

Every shoe purchased was handled with care and Jared stored the original receipt in each box. He was unknowingly protecting the assets that would secure his future.

Fast forward a few years and Jared’s love of sketching and design led him to sketch a logo. He kept sketching it and sketching it and then came up with an image, a dead happy face with Xs for eyes and being viewed through the sight on a gun had a special meaning to him – lose site of your dreams and you will never be happy. The sentiments of never giving up, not being lazy and not slacking were what led him to come up with the name “Nolac.”

So armed with a brand name and a dope logo, Jared set out to his local Champs Outlet to buy some t-shirt blanks. He didn’t have a penny to his name, so after negotiating an amazing deal with the store manager to buy blanks for $1 a piece, he decided to sell his car for $2,800 and bought as many blanks as he could. He found a local screen printer and his brand was born! Quickly he realized he needed more money to really get the brand going and the thing he needed most was a sewing machine. He didn’t want to just be a screen printed t-shirt brand, he wanted to cut out his own patterns and sew them together to create t-shirts with a more athletic fit: longer in body and wider in the armholes for himself and his athlete friends to wear. In order to fund this next stage of the business, he had no choice but to liquidate the only assets he had – his sneaker collection.

He started off by selling a pair here and a pair there to local collectors. With the first three pairs he sold he bought his sewing machine. Well, then he needed fabric and he sold a few more pairs. Once he had his samples ready, he knew he had to pull the trigger and sell the remainder in order to have his first line produced and everything else went up on eBay. 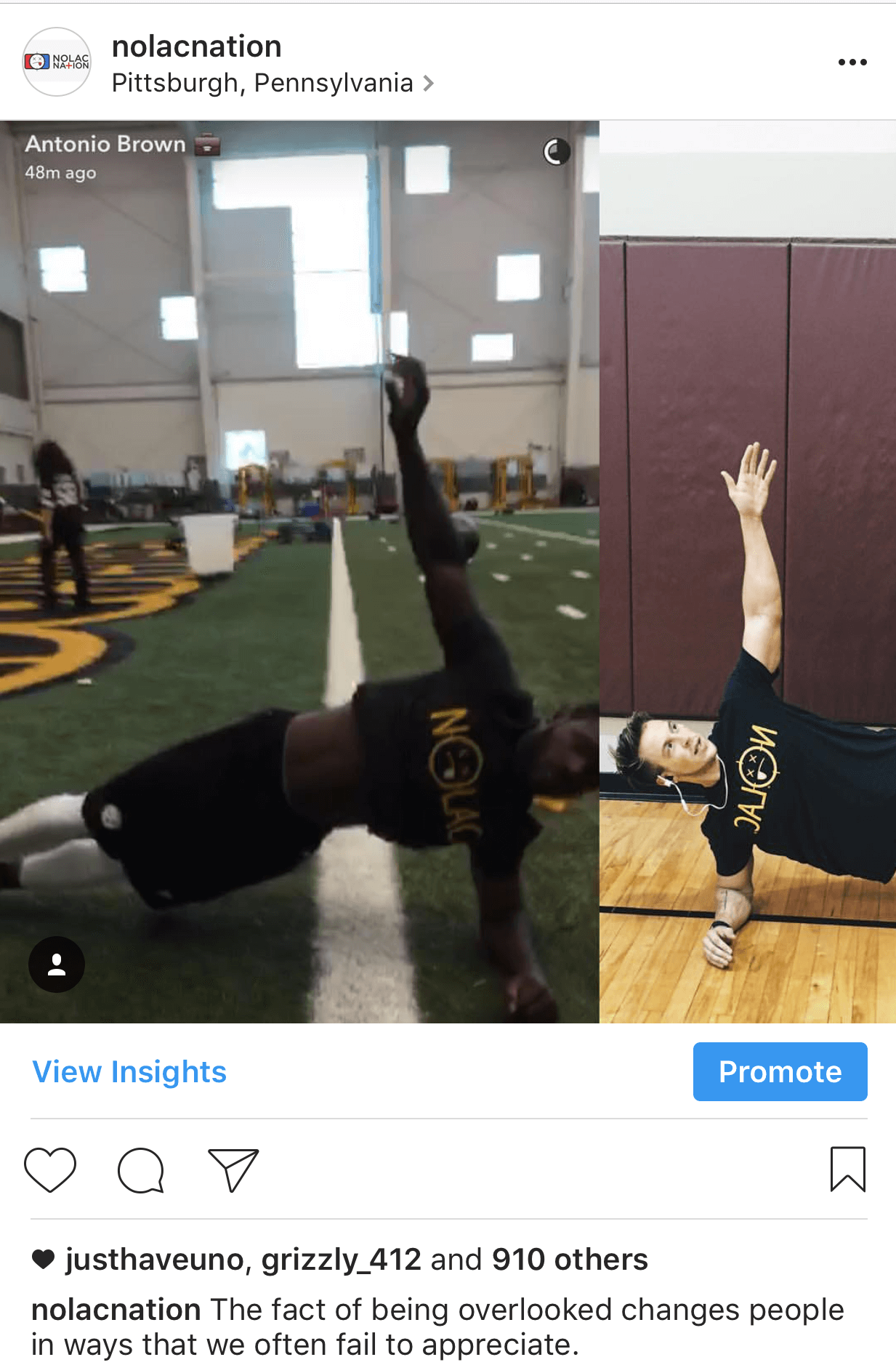 Customers from all over the world — 42 countries to be exact — love that the line fits body types that traditional garments ignore: the athlete. Longer cuts in the tops accommodate taller customers and wider arm openings and a more generous fit in the thigh area allow for the garments to not bunch or ride up on the arm. Currently the line is available on nolacnation.com and in select boutiques around the country. Check them out on Instagram as well.